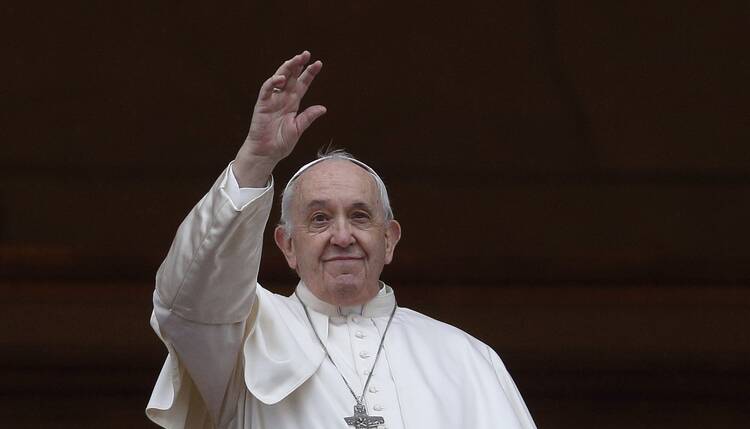 Pope Francis greets the crowd after delivering his Christmas message and blessing "urbi et orbi" (to the city and the world) from the central balcony of St. Peter's Basilica at the Vatican Dec. 25, 2021. (CNS photo/Paul Haring)

Pope Francis plans to publish a constitution to reform the Roman Curia, appoint several senior Vatican officials, hold a consistory to create new cardinals, celebrate the 10th World Meeting of Families in Rome and, depending on the Covid-19 situation, visit countries in the Middle East, Asia, Africa and Europe—all in 2022.

The pope, who celebrated his 85th birthday on Dec. 17, is clearly not planning to slow down. The pope is in good health, and his plans for 2022 indicate that he is carrying out his duties as pontiff with as much vigor as ever; there appears to be no resignation or conclave on the horizon.

Such a busy agenda would be daunting even for a younger man, but the pope, who celebrated his 85th birthday on Dec. 17, is not planning to slow down.

As Indian Cardinal Oswald Gracias told America, Francis’ attitude towards his papacy can be summed up as: “The Lord has chosen me, the Lord will protect me as long as he wants. I’m doing my best, and when he wants, he takes me away.”

By the end of June 2022, the final phase of the restructuring and merging of Vatican offices is expected to be completed. The Pontifical Council for Culture will be incorporated into the Congregation for Catholic Education, and the Pontifical Council for the New Evangelization will be merged into the Congregation for the Evangelization of Peoples.

Just after Christmas, the pope entrusted the Pontifical Council for the New Evangelization—one of the councils being merged—with the task of preparing for the Jubilee Year 2025, but it is currently unclear what impact this task will have on the merger.

It also remains to be seen what changes Francis will introduce into the Dicastery for Integral Human Development, given that he has appointed Cardinal Michael Czerny, S.J., as its interim prefect and Alessandra Smerilli, F.M.A., as its secretary.

The pope is expected to publish the long-awaited constitution for the reform of the Roman Curia, “Praedicate Evangelium,” sometime in the first six months of 2022.

The pope is also expected to publish the long-awaited constitution for the reform of the Roman Curia, “Predicate Evangelium” (“Preach the Gospel”), sometime in the first six months of 2022. Indian Cardinal Oswald Gracias, a member of the pope’s council of cardinal advisors, said that he expects it to be published by Easter (April 17) if the translations into different languages have been completed by then.

Pope Francis will likely replace many, if not all, of the following senior Vatican officials in the new year, since many of the clergy in these positions have already passed the Vatican retirement age of 75. Those who are likely to be replaced include:

This opens the possibility for Francis to appoint at least seven new clerics to top leadership positions in the Vatican over the coming year. If he does so, then for the first time in his pontificate, all the senior Vatican officials will be chosen by him. (As of now, some have been chosen by Pope Benedict XVI and confirmed by Francis.)

As the year 2021 drew to a close, the College of Cardinals had a total of 120 electors—the maximum number allowed, as established by Pope Paul VI in 1975—but 10 of those electors will turn 80 in 2022, and will accordingly lose the right to vote in a papal conclave. Francis is expected to hold a consistory to make new cardinals, probably in the second half of the year. He will name at least 10 new cardinal electors then, which would increase the number of electors created by him in the College of Cardinals by the end of 2022 to at least 72.

Among those expected to receive the red hat are three senior Vatican officials that Francis appointed in 2021.

Pope Francis will participate in the 10th World Meeting of Families, which will be held in Rome from June 22 to June 26. The event will have a “multi-centered format, with local initiatives in dioceses around the world,” to allow those who cannot travel due to the pandemic to participate, according to the Dicastery for Laity, Family and Life.

Pope Francis will participate in the 10th World Meeting of Families, which will be held in Rome from June 22 to June 26.

“While Rome will remain the designated venue, each diocese will be able to be the center of a local Meeting for its own families and communities,” the dicastery’s website reads.

Francis is now the second-most-traveled pope in history, after St. John Paul II. Over the eight years of his pontificate so far, he has made 35 foreign journeys and visited 53 countries. The pope plans to make several more trips in 2022, though the Vatican has not yet confirmed any. While some of these visits—including to South Sudan and Lebanon—are subject to change based on local political situations, all of them will be contingent on the Covid-19 situation both in Italy and at the destinations.

Over the eight years of Francis’ pontificate so far, he has made 35 foreign journeys and visited 53 countries.

Francis has tentative plans to visit South Sudan with the archbishop of Canterbury, Justin Welby, probably in mid-2022 to foster reconciliation and consolidate the peace agreement between warring ethnic factions. But his going there will depend, among other things, on whether the peace accord has been fully implemented. Archbishop Paul Gallagher, the Vatican’s secretary for relations with states, visited South Sudan the week before Christmas on what insiders interpreted as a reconnaissance mission to evaluate whether the country is ready for a papal visit.

Vatican sources, who asked to remain anonymous because they were not authorized to speak, told America that if Francis goes to South Sudan, he is likely also to visit the Democratic Republic of the Congo, a country that has suffered greatly from armed conflict over the past several decades—much of it linked to access to the country’s rare minerals. The Democratic Republic of Congo has the largest Catholic population in Africa and is one of the world’s 10 most populous Catholic countries.

Pope Francis is aiming to visit Lebanon as soon as possible, to give consolation and hope to the people of a country that, while suffering much, gave refuge to vast numbers of Syrian refugees in recent years but who are now experiencing severe humanitarian and economic crises.

Francis has tentative plans to visit South Sudan with the archbishop of Canterbury, Justin Welby, probably in mid-2022 to foster reconciliation between warring ethnic factions.

He also wants to strengthen relations between Christians and Muslims in the country. Lebanon is the only Arab nation with a large Christian population where Muslims and Christians jointly govern. However, he cannot visit until there is a stable, functioning government in the country.

Francis also intends to visit Malta in the coming year, but only after the country’s elections have taken place, which probably means after mid-April.

Vatican sources, who wished to remain anonymous because they were not authorized to speak on the subject, told America that the pope is likely to visit Papua New Guinea, Indonesia and Timor Leste, with a stopover in Singapore, in the second half of 2022. He had planned to visit these countries in 2020, but the trip had to be postponed because of the Covid-19 pandemic. He now feels he owes them a visit and hopes to do so next year. Indonesia has the largest Muslim population in the world, while Timor Leste—which occupies roughly half of an island in between Indonesia and Australia—is the most Catholic country in Asia, per capita.

In the summer, the pope could also visit Santiago de Compostela in Spain for the conclusion of the Holy Year, which was meant to have ended in 2021 but which Francis extended to 2022 because of the pandemic.

In the summer, the pope could also visit Santiago de Compostela in Spain for the conclusion of the Holy Year.

Francis has also indicated that he would like to visit Hungary. During his visit to Budapest in September for the International Eucharistic Congress, he promised the Hungarian president and prime minister that he would return in 2022 or 2023. Vatican sources say this visit could now take place in 2022. That visit could perhaps create the opportunity for a second face-to-face meeting with Russian Patriarch Kirill of Moscow at the Pannonhalma Archabbey, the Benedictine monastery in Hungary founded in 996 C.E. that has become an ecumenical focal point. (Their first meeting, the first-ever between a bishop of Rome and a patriarch of Moscow, took place in Havana, Cuba, in 2016.)

Meanwhile, in the western hemisphere, Pope Francis was meant to visit Canada on a pilgrimage of healing and reconciliation in 2022. But a visit of several representatives of Indigenous peoples to the Vatican which had been slated for December 2021 was postponed because of the Covid-19 pandemic. The trip has not yet been rescheduled, suggesting that the pope is more likely to visit Canada in 2023.

Likewise, Pope Francis’ visit to India is likely to take place in early 2023, not in 2022, as Cardinal Oswald Gracias, the president of the Catholic Bishops Conference of India, told America in a recent interview.

The Holy See and China signed a provisional agreement on Sept. 22, 2018, in Beijing, on the appointment of bishops in mainland China, which was set to be reviewed after two years. The two sides agreed to renew it again in October 2020 for another two years. When that extension ends in October 2022, Pope Francis will have to decide how to proceed, given that the fruits from the provisional agreement have been less than the Vatican had hoped for.

Francis opened the synod on the theme “For a Synodal Church: Communion, Participation, and Mission” on Oct. 17, and the process will continue until the plenary assembly of representatives of the world’s bishops is held at the Vatican in October 2023. The synodal process is meant to involve the whole church, starting at the diocesan level. Francis will almost certainly be tracking how this diocesan phase is being implemented throughout 2022, and he could perhaps give a series of catecheses on the theme of synodality at his Wednesday public audiences.

Correction: A previous version of this article described the World Meeting of Families as annual. It occurs every three years.