Sin can never cancel out your baptism 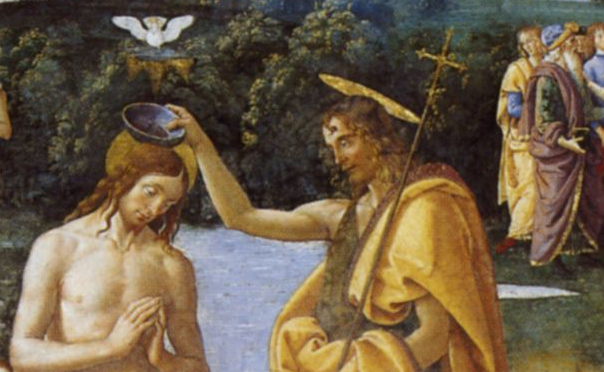 A Reflection for the Baptism of the Lord

Someone had said that Barb Cordell was a cross between Loretta Lynn and Mother Theresa. She looked like the former and lived like the latter. Her life of charity was launched when someone asked her help in finding a job. By the time I met her, she was running a shelter-turned-hospice in downtown Columbus, Ohio.

Five to 15 men called the place their temporary home. We sent college seminarians there to assist her, primarily with household tasks like stocking shelves. As their supervisor, I tended to do whatever they did, just as I did when I visited the other sites where seminarians were sent to serve before learning to lead.

One day Barb asked if, instead of manual work, I could visit a young Black man upstairs who was bedfast. “Carl doesn’t have long to live. He could use a priest.” I found him in a small ward, lying in bed, smoking a cigarette. Ordained only six years, I was apprehensive about discussing someone’s approaching death. So I did what I often did in those days. I asked myself what Bing Crosby’s Father O’Malley would do, and then I pretended.

It was easy to converse with Carl. He told me that for the first time in his life, he felt that he had a place that he could call home. “Sad thing is,” he said as I recall, “all these other men are pulling their weight around here, and I’m too sick to do anything. Can’t even sweep with a broom.”

“You can pray for them, Carl.”

“Pray for them? I don’t think you understand. I got AIDS from drug use. I was a dealer. I sold drugs to kids next to schools. I don’t think God is going to listen to someone like me.”

“Are you baptized, Carl?”

We became different people when we were baptized, even if we were newborn and not yet conscious of being anyone at all. We became those who talk with God.

“Yes, I accepted Jesus and was baptized when I was just a boy. Long time ago.”

“Then, Carl, when you pray, God the Father can’t tell your voice from that of his son Jesus. That’s what it means to be baptized.”

“Really? You don’t think my sins cancel my prayers?”

“You’re a child of God, Carl. Our being unfaithful to the Lord doesn’t make him unfaithful to us. You’re his. You still belong to him. He’ll hear you. To God the Father, you’ll sound just like his son Jesus.”

“Huh. You’re saying I can pray just like I was Jesus and that God the Father is going to hear me. Huh. Then that’s what I’ll do with the time I have left. I’ll pray.”

That was three decades ago. The other day, I was driving between parishes, praying my rosary, wishing that I could be more attentive to it. Flocks of birds were ascending out of the fields, as if to remind me that my thoughts should be rising as well.

Your sins cannot cancel the identity you were given in your baptism. But it is possible to forget who you are.

It suddenly occurred to me—and here’s the point. I’ve always known it, and you’ve always known it as well. But we can know something and not really know it. It is in our head but not in our heart. We are not convinced of it. It suddenly occurred to me that I was talking to the Blessed Virgin Mary. She was listening to me. That made me slow down and begin to savor the words.

Someone once said that the problem with our Catholic sacramental system is that we do not take baptism seriously. The words spoken to Jesus at his baptism have been—are still being—spoken to us:

We became different people when we were baptized, even if we were newborn and not yet conscious of being anyone at all. We became those who talk with God. That is why we have a duty to pray, not only for ourselves, but for others. When we pray, especially when we offer prayers of praise and thanksgiving, it is our privilege, by the power of the Holy Spirit, to enter the loving dialogue of the Father and the Son.

Often in the celebration of Mass, I think of the office I was given at ordination. Whatever my limitations, I have been tasked to pray in the name of the church, for the church. It helps me to concentrate. But, you see, what I do at Mass is only an echo of what I was christened to do in baptism—and what you were charged to do as well. In baptism, you were christened another Christ, carrying the weight of the world into dialogue with your Father.

Thus says the Lord:
Here is my servant whom I uphold,
my chosen one with whom I am pleased,
upon whom I have put my spirit (Is 42:1).

Try praying again. And remember who is speaking as you do so. A beloved child is addressing God the Father. Your sins cannot cancel the identity you were given in your baptism. But it is possible to forget who you are.