I’m a Jesuit and I am not an alcoholic. But I go to 12-step meetings. 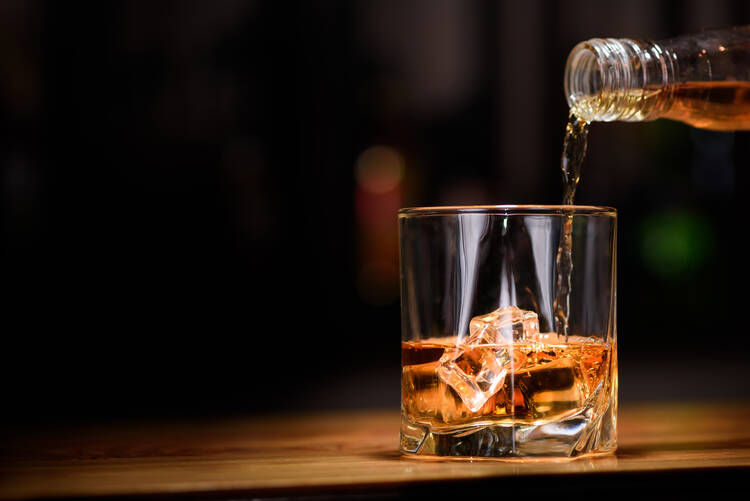 I am a Jesuit priest, and I go to Al-Anon meetings. Al-Anon is a recovery program for those who have a relative or friend who is an alcoholic. I go because I need it. It helps me to live with serenity—a word you will hear in many 12-step programs. I go because my dad was (and is) an alcoholic. With Al-Anon, prayer, counseling and spiritual direction, I have made progress. Still, as they say, I am not done yet.

My journey to Al-Anon took a long time. One of the breakthrough moments came while I was taking a pastoral theology class, a few months before my ordination as a deacon. We were studying family dynamics. One day, we focused on dysfunctional family situations that we might encounter in ministry. To summarize the lecture: “In an alcoholic family, the father usually has the drinking problem. The mother may alternatively defend him and attack him, usually verbally. The kids have a sense that something is wrong, though they are not sure what. There is a deep underlying tension for the children. Why is dad in a good mood one day, angry the next and unconscious the next? They feel anger, frustration, confusion, fear and stress.” I felt like the teacher had had a video camera hidden in my house when I was a kid. He was talking about me and my family.

I go because my dad was (and is) an alcoholic. With Al-Anon, prayer, counseling and spiritual direction, I have made progress. Still, as they say, I am not done yet.

I developed a lot of bad habits growing up in an alcoholic home. These included lying, distrust, avoiding confrontation and anger issues. I did well in school and was active in my parish and in sports. As I entered the Jesuits and progressed through formation, I had several bad experiences with bosses and Jesuit superiors. I avoided them, feared them, yelled at them and tried to change them. This did not go well for me, as you might imagine. I did not have problems with every superior—only with those who reminded me of my father. This pattern was not clear to me at first. My thoughts bounced between, “Why does this guy hate me?” and “Why am I so mad at this guy all the time?” It had not occurred to me that these issues could be connected to my home situation while growing up, or that there might be a solution.

I talked with my Jesuit superior after class as I pondered that breakthrough lecture. My superior at the time and I had (and have) a good relationship. He was (and is) a reliable, supportive father figure. He encouraged me to talk with Jesuits involved in A.A. for advice. I had several Jesuit friends in A.A. They recommended Al-Anon.

Al-Anon is the sister program of Alcoholics Anonymous. Both programs are now international, reaching diverse people from all parts of society. When A.A. was beginning in the United States in the early 1930s, it attracted mainly men. Bill W. and Dr. Bob, the recognized founders of A.A., would meet with people seeking freedom from addiction to alcohol. Their wives would often chat while their husbands were at their meeting. Bill’s wife, Lois, was one of the women sitting on a folding chair in the hallway of a church basement while her husband was at A.A. She adopted A.A. principles for herself and for Al-Anon because these women found that they had a lot in common. They loved a man with a drinking problem, and that created issues in their lives.

By adopting the spiritual principles of A.A., they began to find healing and support themselves.

These first women of Al-Anon were often stressed and confused from riding the emotional rollercoaster caused by alcoholism in their homes. He’s drunk, he’s sober, he’s angry, he’s remorseful, he’s happy, he’s sad, he’s gone, he’s back. These women developed their own coping mechanisms. Some built walls. Some rode the roller-coaster with him. Some yelled or lied or hid or tried to change him. This did not go well for them, as you might imagine. By adopting the spiritual principles of A.A., they began to find healing and support themselves. Over the years, both A.A. and Al-Anon expanded to include men and women; Al-Anon now has not only wives, but husbands, girlfriends—and sons, like me.

At first, I found Al-Anon confusing. Al-Anon is built on the same 12 steps as Alcoholics Anonymous. Step 1: “We admit that we are powerless over alcohol and that our lives have become unmanageable.” Step 2: “We came to believe that a Power greater than ourselves could restore us to sanity.” I protested, “Why do I need this? I’m not an alcoholic. I don’t even live with an alcoholic anymore.”

But alcoholism is a powerful addiction that has an impact on the drinker and those close to him. My own life has been affected. I developed coping mechanisms of my own; I avoided problems and did not address them. Al-Anon gave me a helpful framework for naming my situation, taking responsibility for my actions and making changes so that I could live a (more) emotionally sober life—without lashing out, hiding or fantasizing about a perfect and stress-free life.

Al-Anon gave me a helpful framework for naming my situation, taking responsibility for my actions and making changes so that I could live a (more) emotionally sober life.

As I came to discover, A.A. and Al-Anon have a lot in common with Christianity and Ignatian spirituality. Bill W. had a Jesuit as a friend and spiritual advisor. Father Ed Dowling, S.J., helped Bill to frame A.A. with principles drawn from the Spiritual Exercises of Saint Ignatius. One principle that resonates with me is detachment. I needed to detach from the emotions and behaviors of others, because I often have an “inordinate attachment” to their dysfunction.

As I grew in understanding the steps, I realized I was still attached to my father’s dysfunction. In an alcoholic home, our understanding of our own responsibility, and others’ responsibility, can blur together. “If you kids were better behaved, maybe your dad wouldn’t drink so much.” Not true. I got all A’s in school. He still drank. Some weeks I would skip all my chores at home and see if anyone noticed; they didn’t because dad was passed out and mom was exhausted. No matter what I did, or what I did not do, it seemed it was never the right thing. Alcohol addiction is cunning, baffling and powerful for the drinker and his or her family. We need a higher power to free us from this dysfunction.

St. Ignatius urges us in the Spiritual Exercises to free ourselves from “disordered attachments” to wealth, power and honor. We might wonder, So what should I attach to instead? Step 2 gives us the answer: It is not “what” but “Who?” As a Catholic, Jesuit priest, my higher power is my closest friend, Christ the Lord. I can attach to him. He will not let me down. Like a good father, he may not give me everything I want; he may challenge me. And he models for me what true fatherhood is, for his substantial identity is from the eternal Father. My relationship to a higher power can restore me to sanity by reordering my attachments. God is my true father; his son, Jesus, is my savior and friend.

We need a higher power to free us from this dysfunction.

Finally, I’ll highlight one commandment that has resonated with me throughout this process: “Love your neighbor as you love yourself.” We often put the accent on the first part: Love your neighbor. And we should. But Jesus also wants us to love ourselves. For me, that means sleeping seven to eight hours per night, finding time for prayer and regular exercise, spending time with friends and going to Al-Anon. God loves me. He wants me to be emotionally and spiritually healthy so that I can live my vocation. With him, I can.

At Al-Anon meetings, I still hear stories that remind me of my own family’s experience. Some people are in the early stages of this recovery program. Their lives are chaotic, stressful and broken. I also hear veterans who have been in this program for 20 or 30 years. They have grown, healed and realize they are still growing. After 10 years, that is me. I am doing O.K. in my newest assignment, so far. And I am still growing.

A listing of Al-Anon meetings across the country can be found online.

Anonymous is a young Jesuit priest in middle America.