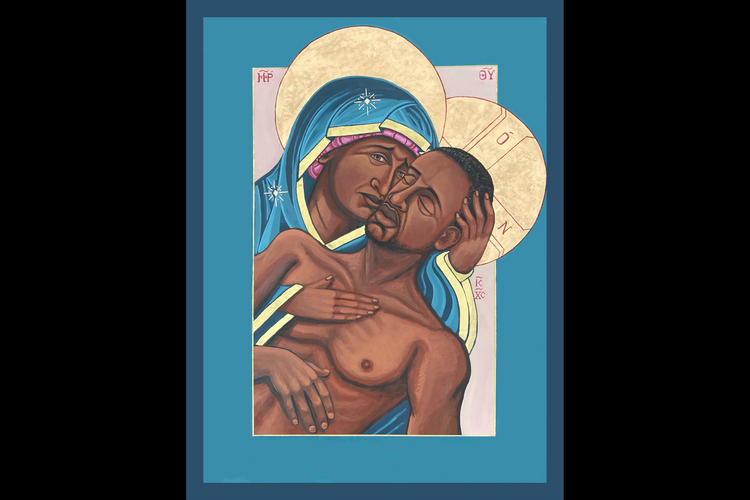 “Mama” (2020), a painting by iconographer Kelly Latimore, was stolen from the Catholic University of America in November. (Image courtesy of Kelly Latimore)

Sometimes, when I pray the Liturgy of the Hours, a particular phrase remains with me. I revisit it throughout the day like a happy gardener revisiting a rose to inhale its lovely scent. This past fall, a petition from Morning Prayer struck me in this manner:

Enable us to see your image in all men, and to serve you in them.

Perfect us in love, Lord.

Instead of remaining with me for just a day, the prayer has remained in my mind for weeks. In early November, St. Francis of Assisi had been occupying my mind. In particular, his encounter with the leper played over and over in my mind. The petition has served to further my meditation on the conversion of St. Francis.

Some derided the art as contemptuous of God and sacrilegious. What did artist Kelly Latimore intend to convey with the image?

Society, in Francis’ time, treated lepers as outcasts. Francis himself felt intense disgust toward them. In his Testament, St. Francis reveals that “the sight of lepers nauseated me beyond measure.” So Francis’ response to encountering a leper is quite surprising.

While riding his horse, Francis happened upon a leper. Given his revulsion toward lepers, one would expect him to gallop quickly away. However he dismounted, embraced and kissed the leper and gave him money. Some accounts say he was overcome with compassion for the leper. He felt gladness after the encounter, and while riding away he glanced back to see the leper—but no one was there. He then realized it was Christ in the guise of a leper.

St. Francis writes of the experience in his Testament. He says of lepers that “God himself led me into their company…. What had previously nauseated me became a source of spiritual and physical consolation to me.”

St. Francis’ story made me wonder where Christ is hiding today. Where is he? Under what guise might he be found?

News broke shortly before Thanksgiving that someone stole a religious painting called “Mama” from The Catholic University of America in Washington, D.C. At the conclusion of Black History month this year, a priest blessed the painting destined for the Mary, Mirror of Justice chapel. The painting hung for months at the chapel and was gazed upon by those who attended weekday Mass there. Then someone stole the blessed artwork. Isn’t the theft of a blessed object from a sacred space an act of sacrilege?

Shortly before the theft, The Daily Signal, a secular blog run by The Heritage Foundation, shared the details of a complaint it received from a student at Catholic University about the blessed image. The image portrays the Mother of God holding her son’s dead body. The body is both that of Christ’s and George Floyd’s according to the artist. The student believed that the blessed image on public display at a chapel meant The Catholic University of America was falling prey to secularization. This was an odd charge given that a religious icon in a sacred space is meant to raise the mind to the spiritual, to God.

On another occasion, the student who tipped off The Daily Signal asserted the image cannot be Christ because there are no marks of the crucifixion on his hands. The student omits the explanation from the artist, Kelly Latimore, on why there are no marks. The full quote from the artist is clear: The marks were omitted because the Christ figure in the icon was lynched. Additionally, there are other symbols present that identify Christ, from the cruciform halo to the Greek letters for Jesus Christ.

Amid the chthonic furor over a religious image, I wonder: Are we missing our St. Francis moment? I think of the rage and disgust people of Francis’ time had for lepers. Societal attitudes and practices toward lepers informed Francis’ disposition too. Yet in that life-altering encounter with the leper, Francis was overcome by compassion. Francis regained control of his sentiments previously in the grip of the devil. He moved from disgust to love and in that moment embraced and kissed Christ in the guise of the leper!

The irate are so trapped by their disgust for George Floyd that they cannot see Christ. A review of responses to this story on social media sadly makes this plain. These respondents ignore the plain evidence of the icon’s symbols for Christ. They justify their disgust instead of lamenting their blindness. They should be crying out for healing like the blind man Jesus encountered on the road near Jericho (Lk 18:35-43). Their prayer of petition, and ours, should be: “Enable us to see your image in all men, and to serve you in them. Perfect us in love, Lord.”

This week I invited the artist who created “Mama,” Kelly Latimore, on my podcast to discuss the image and the backlash. Some derided the art as blasphemous, erroneous and contemptuous of God and sacrilegious, a deliberate violation of a sacred thing. What did Latimore intend to convey with the image? Is the picture meant to be a deification of George Floyd?