Podcast: The biggest Vatican stories of 2021 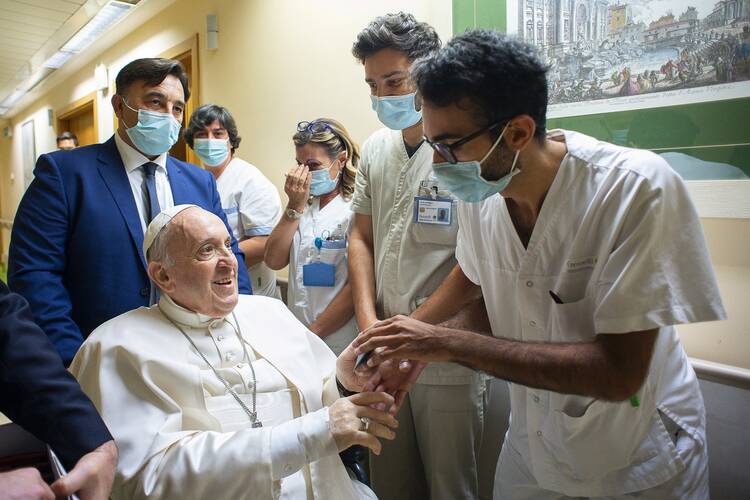 Pope Francis gives a rosary to a member of the medical staff at Gemelli hospital in Rome July 11, 2021, as he recovers following scheduled colon surgery. The pope expressed his gratitude for "making me feel at home" while he recovered from surgery, in a July 15 letter to the chairman of the board of directors of the hospital. He was released July 14. (CNS photo/Vatican Media via Reuters)

This week on “Inside the Vatican,” host Colleen Dulle and Vatican correspondent Gerard O’Connell take a look back at this year in Vatican news.

This year brought three risky papal trips to Iraq, Hungary and Slovakia, and Cyprus and Greece, all undertaken during the Covid-19 pandemic. In the meantime, Pope Francis’ health came into question when he underwent surgery on his colon in mid-July. Gerry recaps the pope’s trips and gives an update on his recovery.

Within the Vatican, the pope continued his reforming efforts: This year saw the opening of the first-ever Vatican trial of a cardinal for financial crimes, and Pope Francis opened the global “synod on synodality” in an effort to move the church toward greater collaboration between leadership and lay people.

Looking across the Atlantic, the pope stepped into the U.S. bishops’ debate around communion for pro-choice politicians, telling Gerry aboard the papal plane that he had never denied communion to anyone. Colleen and Gerry recap the story and look at where the Vatican would like to see the U.S. bishops go from here.

Pope Francis in Iraq: Everything you need to know about the historic trip

What to expect from Pope Francis’ trip to Hungary and Slovakia

In a historic first, a cardinal stood trial at the Vatican over involvement in a real estate scandal

Podcast: The Synod on Synodality will be an uphill battle — but it’s worth it