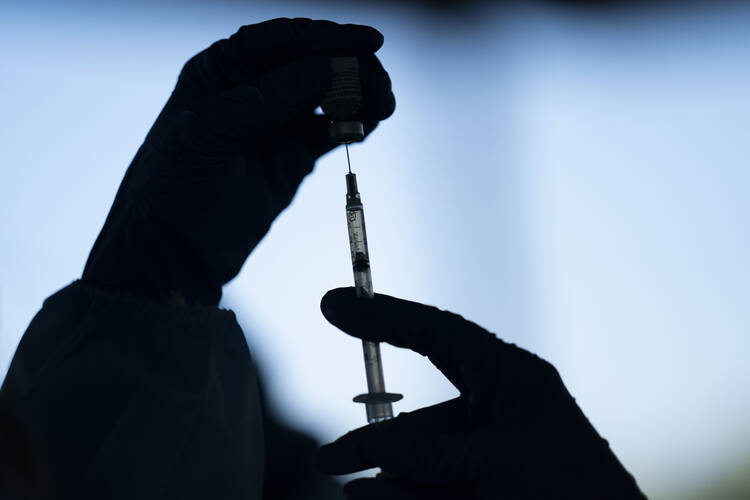 A new poll finds that about 60 percent of Americans agree with the statement, “Because getting vaccinated against COVID-19 helps protect everyone, it is a way to live out the religious principle of loving my neighbors.”

But among those who disagree with that statement, it seems, is Archbishop Salvatore Cordileone of San Francisco.

In an interview with the San Francisco Chronicle posted on Dec. 1, the archbishop revealed he has “not yet” been vaccinated against Covid-19 and offered a number of scientifically dubious reasons why.

“From what I’ve been able to learn about the vaccines, about the dangers of Covid, and talking with my own primary health care physician, I do have a good immune system,” Archbishop Cordileone said. “And he told me that it’s probably not necessary for me to be vaccinated.” He added that he believes he would already have contracted Covid-19 if he were at risk and that he can protect others by simply isolating if he experienced symptoms.

Michael Rozier, S.J., said that the archbishop’s claim that his “good” immune system exempts him from needing a vaccine is simply out of touch with science.

Michael Rozier, S.J., an an assistant professor at St. Louis University’s public health school, said that the archbishop’s claim that his “good” immune system exempts him from needing a vaccine is simply out of touch with science. “The vast majority of physicians would not heed that or give that advice,” Father Rozier said.

“We can’t assess the strength of somebody’s immune system and then absent them from needing the vaccine,” he continued. “Empirically, we have not seen that to be true.”

Archbishop Cordileone also suggested, erroneously, that the Covid-19 vaccines are not vaccines in the traditional sense because they require booster shots to be fully effective. “The truth is that we provide boosters for any number of vaccines,” Father Rozier said. “It’s actually more typical to require a booster for a vaccine than to not require one.”

Archbishop Cordileone also said in the interview that he has been in large, crowded indoor spaces without wearing a mask. Some people in those gatherings tested positive for Covid-19, he said, though he did not contract the virus, leading him to believe that he is somehow immune to it.

That is not how risk analysis works, Father Rozier said.

Instead, he said, consider risk analysis when it comes to driving. Someone may drive 10,000 miles without an accident—but that has no bearing on whether someone might hit a car at mile 10,001.

As for Archbishop Cordileone’s claim that he is not worried about spreading Covid-19 should he contract it and not experience symptoms, Father Rozier said that is exactly the wrong way to think about how the virus spreads.

“It’s actually quite common for an unvaccinated person to spread the disease asymptomatically,” Father Rozier said.

Vaccinated individuals, on the other hand, who contract a breakthrough case of Covid-19 tend to experience lower viral loads than the unvaccinated, and they have been shown not to spread the virus at the same levels, he said.

“It’s a terrible disservice, actually, to think of vaccinations as only impacting the person who is vaccinated,” Father Rozier said. From the very beginning of understanding infectious disease, “we have not only tried to protect ourselves but tried to protect others because we serve as vectors of disease.”

62 percent of white Catholics and 68 percent of Hispanic Catholics agreed with the statement: “There are no valid religious reasons to refuse a COVID-19 vaccine.”

The new poll, one of three commissioned jointly by the Public Religion Research Institute and Interfaith Youth Core, found that 62 percent of white Catholics and 68 percent of Hispanic Catholics—as well as 60 percent of all polled—agreed with the statement: “There are no valid religious reasons to refuse a COVID-19 vaccine.”

Of those who have been vaccinated, 44 percent of Hispanic Catholics and 39 percent of white Catholics were motivated at least in part by the desire to protect those who cannot get vaccinated.

“The vaccine-hesitant category has shrunk to the point that no single religious group has sufficient sample size to report how religious approaches might influence their willingness to get vaccinated,” the report said. “However...there are still indications that some religious Americans—particularly Christians of color—could be reached by one or more religious approaches.”

One Catholic bioethicist said church leaders have a moral responsibility to lead by example—or to at least make sure they refrain from spreading misinformation about the vaccines.

Pope Francis in a video earlier this year said that getting vaccinated against Covid-19 is “an act of love,” describing the vaccines as “a simple yet profound way to care for one another, especially the most vulnerable.”

One Catholic bioethicist said church leaders have a moral responsibility to lead by example—or to at least make sure they refrain from spreading misinformation about the vaccines.

M. Therese Lysaught, a professor of bioethics at Loyola University Chicago’s Stritch School of Medicine and a member of the Pontifical Academy for Life, said that in her opinion, Catholics who are medically able to receive the vaccines have a moral obligation to get the shot. The reasons include protecting oneself from Covid-19, but also include protecting others from contracting the virus and helping to end mutations that could wreak havoc on health care systems.

With Covid-19 deaths in the United States now approaching 800,000, Dr. Lysaught wonders what it will take to convince unvaccinated people like Archbishop Cordileone to get vaccinated.

“How much higher do they want the figure to go?” she asked. “What action are they personally going to take to try to help stop this pandemic?”