Cardinal Czerny: Theology must be grounded in pastoral experience 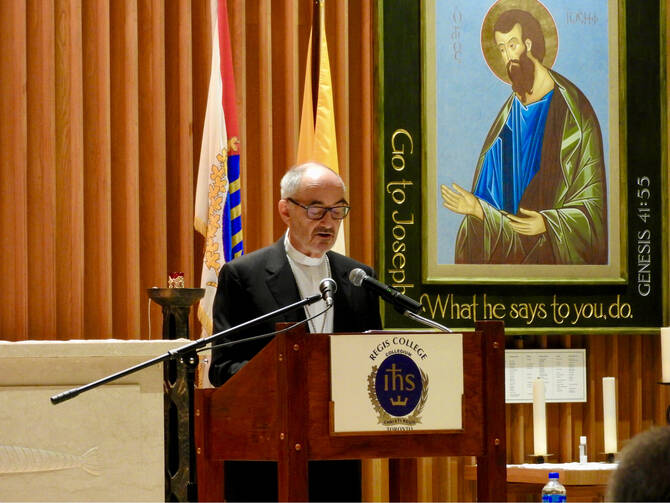 Cardinal Michael Czerny, S.J., called for theological schools to be “providential cultural laboratories” in a recent speech in Toronto. But the cardinal warned that theologians have too often ignored this challenge since at least 1979.

The cardinal delivered the remarks as part of the Chancellor’s Lecture at Regis College before receiving an honorary doctorate of divinity from the college. Cardinal Czerny—a trusted advisor to Pope Francis who also serves as undersecretary of the migrants and refugees section in the Dicastery for Promoting Integral Human Development—delivered a lecture on “The Renewal of Theology as Dialogue from Within.”

For Cardinal Czerny, renewing theology as dialogue from within means recognizing that “pastoral experience is what crucially serves to refocus and to reground ecclesiastical studies.”

Pastoral experience, more than any conciliar or magisterial document, should be the material of theological reflection, as it has “tested and enriched...on the ground” the rich legacy of the Second Vatican Council and Catholic social teaching.

Cardinal Czerny quoted Pope Francis’ 2019 speech in Naples to argue that it is in theological faculties “in which the church carries out the performative interpretation of the reality brought about by the Christ event and nourished by the gifts of wisdom and knowledge by which the Holy Spirit enriches the People of God in manifold ways—from the sensus fidei fidelium to the magisterium of the bishops, and from the charism of the prophets to that of the doctors and theologians.”

Citing Pope Francis’ call in “Evangelii Gaudium” for all ecclesial activities to be put in a “missionary key,” Cardinal Czerny urged Regis College to put itself “at the service of the path of a church that increasingly puts evangelization at the center.”

The Challenge of Vatican II

The cardinal argued that this understanding of the role of theologians and ecclesiastical faculties flows from the vision of Vatican II, particularly “Gaudium et Spes” and its emphasis on an open and rich dialogue between the church and world. “Dialogue is surely aimed at making the proclamation of the Gospel more effective,” Cardinal Czerny said, “but is even more necessary to grasp the signs of Christ’s presence that emerge from history.”

For Cardinal Czerny, this dialogue is a matter of the church’s continually recovering “its true ecclesial identity.” It is within that identity that the theologian must find him or herself. But the theologian, like the church, must continually go out beyond him or herself. Offering the image of the tent of meeting outside the Israelite camp (Ex 33:7), the cardinal urged theologians toward “an indomitable passion for the kingdom that moves them out of their comfort zones, security zones, without borders.”

The theologian, like the church, must continually go out beyond him or herself, Cardinal Czerny said.

It is a problem, then, that this renewal has not occurred in theological schools, he said. The cardinal noted that two signal documents on the theme—“Sapientia Christiana”of Pope John Paul II and “Veritatis Gaudium”of Pope Francis—were remarkably similar. In other words, Pope Francis has had to “remind the ecclesial faculty of what John Paul II had laid out, but which theological faculties had largely ignored.”

Gerard Ryan, S.J., professor of political theology at Regis College, characterized the cardinal’s challenge for America: “The invitation is to develop ways of theologizing within the academia—whether teaching or learning—that prioritize contextual theology that listens to the experience of the people of God and empowers God’s people to speak within their ecclesial community about the knowledge and understanding of God today.”

Cardinal Czerny noted that “Veritatis Gaudium” proposes two traits of value to the church’s context today: attention and courage. According to Cardinal Czerny, attention should lead to compassion, and courage should support discernment and dialogue.

Attention is how dialogue becomes “submissive,” allowing oneself to be touched by the oppression borne by others, and responsive to the authority of their experiences. He contrasts this attitude with Pope Francis’ description of Babel, a story that is about more than misunderstanding others. “When I do not listen to what the other person is saying and think that I know what the other is thinking and is about to say—that is the bane,” the pope said in Naples.

Courageous action requires a big heart, one which motivates and sustains “the encounter between faith and science, between proclamation and culture, between cultures and religions, even if these sometimes risk confrontation or friction.”

It is precisely through such attention and courage that theologians can truly embrace the catholicity of the church in its complexity, choosing realities over ideals, the cardinal said. Moreover, these attributes lead to a whole habit of being for theologians. Attentive courage and courageous attention mean that “dialogue and discernment are not just techniques or even strategies, but costly engagements which never cease to make the most intrusive kind of demands on us.”

How realistic is the vision that Cardinal Czerny proposes? A number of factors complicate its actualization, he said. First and foremost, academic theology must overcome the individualism that influences how it operates. The cardinal admitted that he was speaking “heavy words” in urging theologians to embrace a more collaborative model.

Academic theology must also not be afraid to engage realities as much as ideas. “What’s the distance between your school and the parish? The local bishop?” Cardinal Czerny asked.

Academic theology must also not be afraid to engage realities as much as ideas: “What’s the distance between your school and the parish? The local bishop?”

Theologians must also allow themselves to be challenged by globalization, as the church’s center continues to shift to the global South. Cardinal Czerny noted that the irregular borders of globalization mean that in the North American church, there are many non-Western Catholics who everyday must “translate” the cultural forms of North American Catholicism into something that makes more sense to them. The dialogue he is calling for, in other words, does not require a passport. It could happen on one’s own street.

Cardinal Czerny further noted that theology must take seriously the relationship between faith and justice—a topic that has been important for decades but continues to evade resolution. He noted that the two are inseparable:

Faith without the struggle for justice risks abstraction from reality, insignificance, limitation to mere cult and ritual. At the same time, however, the commitment to justice needs to be nourished by living, reflective and educated faith, otherwise it descends into ideology.

A Cardinal on the Margins

While the cardinal cited papal and conciliar documents extensively, his personal witness shone throughout the talk. Cardinal Czerny has devoted his life to bringing about dialogue between the church and the world, and showing how the church can be of service to those in need.

His work began in Toronto, where he founded the Jesuit Centre for Social Faith and Justice in 1979. He then went to the Central American University in San Salvador after the death of the UCA martyrs. Afterward, he went to Rome to work in the central Jesuit social justice office before moving again to work at the African Jesuit AIDS Network. Finally, he returned again to Rome, this time to work in the Vatican at the Pontifical Council for Justice and Peace. He took on his present role at the Dicastery for Promoting Integral Human Development in 2016. His ecclesial ministry exemplifies the traits he seeks to encourage in theology: an attentive concern for, and a courageous determination to serve, the other.

Indeed, Thomas Worcester, S.J., the president of Regis College, said that Regis chose to bestow a doctorate on Cardinal Czerny for the “very reasons that Pope Francis made him a cardinal”: “We wished to honor the very many ways in which he has devoted his life with great generosity to the poor, the oppressed, those suffering with AIDS, the marginalized, migrants and refugees.”

This love was on greatest display as Cardinal Czerny shared his delighted surprise that so much of the magisterium on the role of theological faculties arises from the church’s social teaching, noting the influence of numerous social encyclicals on Pope Francis’ “Veritatis Gaudium,” to say nothing of Francis’ own “Evangelii Gaudium,” “Laudato Si’” and “Fratelli Tutti.” Cardinal Czerny said that this shows the social magisterium is at “the heart of the matter,” not a curiosity for the few who care.

In other words, Cardinal Czerny models the courage and attentiveness to which Pope Francis calls us in “Veritatis Gaudium,” and does so in the service of the charity proposed to us in the Gospel. He exhibits the docility to the Spirit that Pope Francis never ceases to call for.

Perhaps what theology ultimately needs to bring about the kind of renewal Cardinal Czerny seeks, then, is to imitate Cardinal Czerny himself: to be humble and committed Christians whose attractive example draws others into the enterprise, and most of all the community of those who would undertake and share theological reflection for the life and ministry of the church.