Cardinal Czerny on ‘Fratelli Tutti’: Pope Francis addresses a world ‘on the brink’ 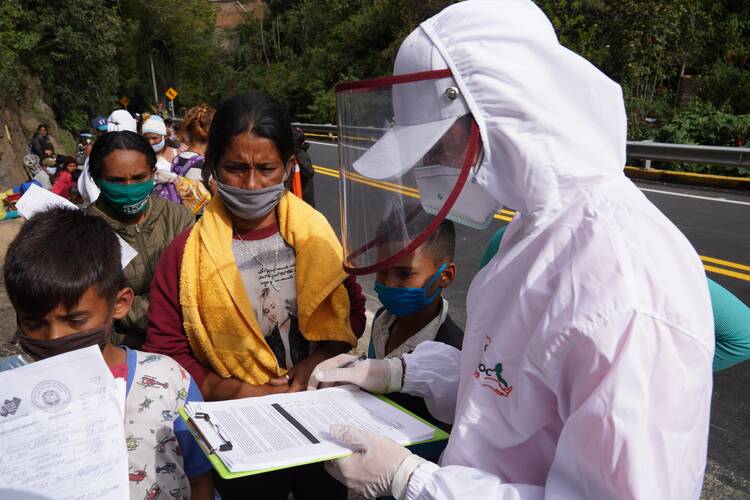 A worker for the humanitarian group Consornoc registers Venezuelan migrants arriving in late September in Pamplona, Colombia. Consornoc hands out backpacks with food that are supplied by Caritas France. (CNS photo/Manuel Rueda)

In “Fratelli Tutti,” Pope Francis addresses a humanity “on the brink” and indicates a way forward to a better future for all by treating each other as brothers and sisters of the one human family, Cardinal Michael Czerny, S.J., told America after the publication of the encyclical on Oct. 4, the feast of St. Francis of Assisi.

“We’re on the brink,” the cardinal said, because as the coronavirus pandemic spreads across 213 countries and territories people are suffering from “a health collapse and an economic collapse, at the same moment as the Paris Climate Agreement I.O.U.s are coming in and there is a migrant situation that is dire.” He also pointed to many “pointless wars” that lack any justification.

He agrees with various commentators, including America’s editor at large James Martin, S.J., who have said that “Laudato Si’’’ taught us that everything is connected; “‘Fratelli Tutti’ teaches us that everyone is connected.” This means that Pope Francis “is not talking about something else; he’s talking about the same subject but at a deeper level,” Cardinal Czerny said.

When I put it to him that Francis appears to have packaged all his social thinking into this document, Cardinal Czerny responded, “Yes and no.”

“We’re on the brink,” Cardinal Czerny said, because people are suffering from “a health collapse and an economic collapse as the Paris Climate Agreement I.O.U.s are coming in.”

On the other hand, he explained, “we spoke of conjunctural analysis as ‘naming the moment,’ which complements how things usually work or do not work. And today, the moment is ‘a moment on the brink.’”

One could say the encyclical has parallels in the recent history of papal teaching when humanity was “on the brink” for other reasons. He mentioned some: Pius XII’s Christmas messages during World War II as he looked to the reconstruction of Europe; John XXIII’s “Pacem in Terris” (1963) after the Cuban missile crisis; Paul VI’s “Populorum Progressio” (1967) at the time of decolonization; and John Paul II’s “Centesimus Annus” (1991) as the Cold War was ending.

Cardinal Czerny said, “I know that ‘Fratelli Tutti,’ like all other documents of the social teaching, will remain forever as part of the heritage of depository of the church, but we receive it at this particular moment in history when people feel we’re ‘on the brink’ and can’t go back and, as Pope Francis tells us: ‘Don’t even think of trying to go back.’”

Asked what particularly struck him when he read the encyclical, Cardinal Czerny responded without hesitation: “The first two chapters!”

He described the first chapter as “a clear-eyed, unvarnished ‘naming of the moment.’” He considered this as “very striking because we’re confused about the moment, and our leaders in all spheres are confused and are confusing us, some of them deliberately so.”

Cardinal Czerny: “There are very few problems that we have as a human family that cannot be linked to the lack of good governance. Our inability to manage our problems is what is doing us in.”

On the other hand, he said, “the Holy Father is clearly, in a certain sense calmly and without much rhetoric, telling it like it is. He ‘names the moment well’ when he gave Chapter 1 the title ‘Dark clouds over a closed world.’” The cardinal said, “This chapter can’t help but touch you, if you’re in touch with yourself, with your feelings, your family and your community.”

Cardinal Czerny revealed that at a personal level, he was profoundly struck by the second chapter, called “A stranger on the road,” in which Pope Francis reflects on the parable of the Good Samaritan and what it has to say to people today.

“Everybody knows, even people who are very far from the church, that the Good Samaritan is a parable of charity, is a parable of how you’re supposed to respond,” he remarked. He recalled that we use the word Samaritan for institutions, for programs and for efforts to meet the needs of those who are in need of help, and so “it’s a response parable.”

He recalled that “we already know that Jesus himself turns the question around in the parable. The parable starts off because the scribe asks him, ‘Who is my neighbor?’ and Jesus ends up saying, “Be a neighbor to,’ not identifying somebody as a neighbor but ‘be a neighbor to.’”

Cardinal Czerny: “We don’t see it as the Good Samaritan did because the ideologies of various kinds are separating us from our brothers and sisters.”

He remarked: “You could take a distance from the encyclical and say, ‘The pope is trying to get us to recognize that all these people are our brothers and sisters.’ But it’s more than that. What he’s saying is, ‘You’ve got to be a brother and sister to everyone who needs us.’ The category isn’t out there; the category is here. Our human family and our common home needs me to be brother to the people who need me and needs you to be sister to these people.”

He recalled that Pope Francis states: “The parable eloquently presents the basic decision we need to make in order to rebuild our wounded world. In the face of so much pain and suffering, our only course is to imitate the Good Samaritan” (No. 67).

He added, one could say, “our world is well organized to the degree of charity, but it’s also very well organized to blind us to how the world is, and the Good Samaritan opens your eyes to how the world really is, in a way that you can do something about it and that you must do something about it because you are called to be brother and sister to everyone.”

Asked what he considers as really new in “Fratelli Tutti,” Cardinal Czerny pointed to two things. The first is that “everybody will recognize that they have something that they really have to contribute in today’s wounded world. We’ve always tended to think that the big problems had to be resolved by the specialists, and, if we’re lucky, they would solve them fairly well. But now the problems are too big for that; each of us has to contribute.”

He said the second novelty is found in “the rehabilitation of politics,” referring to Chapter 5 of the encyclical that bears the title “A better kind of politics.”

He explained that what the pope says here is an “extraordinarily well-focused, well-intentioned, you might say well-targeted response to the needs of the world.”

Indeed, “there are very few problems that we have as a human family that cannot be linked to the lack of good governance or bad governance or lack of governance. Our inability to manage our problems, much less stop creating them, is what is doing us in.

“So, if you say give me a practical answer to our needs from ‘Fratelli Tutti,’ it is obviously good politics.”

Cardinal Czerny concluded, “I don’t think that anybody can read that Chapter 5 or even talk about it without thinking of their own country, their own region, their own province or their own city.”

The cardinal concluded by recommending that people read “Fratelli Tutti” at a slow pace, not all in one sitting; he suggested that it would be even more enriching to read one or other chapter with other people and discuss it.