How imaginative prayer helped me reconcile with my father 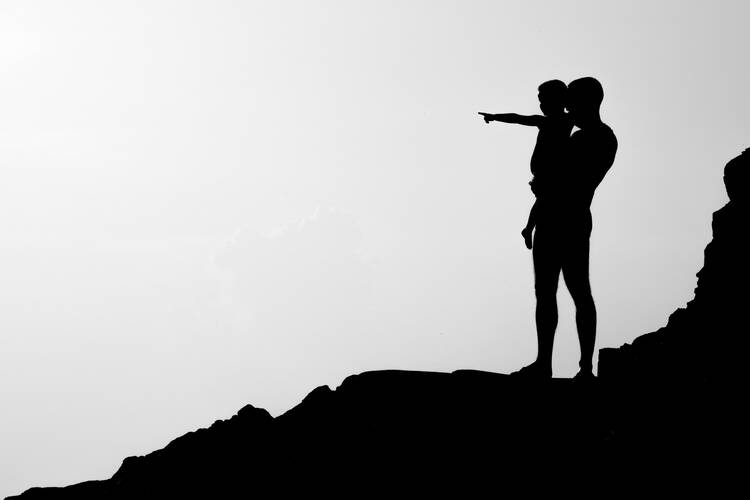 image by Ante Hamersmit on Unsplash

I was a student nine time zones away when I received the notice on my phone that my father had suddenly died. Time seemed to pause. In local time, it was the Hour of Mercy, and I was about to speak with a priest who would offer me that mercy after listening to my sins. When I encountered a Jesuit priest in the confessional, I no longer remembered what I had been planning to confess. But I felt that a servant of God had shown up to comfort me in my darkest hour.

As friends checked up on me in the subsequent days and weeks and months, I assured them that I had learned to forgive myself; yet, forgiving myself was different from learning whether my father had forgiven me.

Although neither of us was aware of it, my father shaped my personal concept of God. My father’s thoughts were not my thoughts, nor were his ways my ways. My father was a natural provider who was capable of enormous sacrifice and generosity, yet somehow lacked the emotional language to express his affection. But I could always sense when my father was proud of me and when he expected more from me. These real and perceived expectations probably contributed to the scrupulosity that would later characterize my personal spirituality.

Although neither of us was aware of it, my father shaped my personal concept of God.

My father tended to seek what was far while missing what was near. His affinity for strangers led him to enjoy a certain rapport with them, but he somehow found it harder to relate to his own children. This may have influenced my personal belief that others were entitled to an intimacy that I could only imagine. I mistakenly believed that in our later years my father and I would progress to a deeper level of conversation. But we did not.

Perhaps the stumbling block lay within me. Had I ever allowed myself to be close to him, to be truly vulnerable? Instead, I chose to project an aura of moral authority, intellectual rigidity and physical endurance. Normal conversations with my father tended to devolve into intense debates about each other’s lifestyle, moral and political values, and style of friendship. I questioned everything from his occupation to how he negotiated his life as a refugee in the U.S.

Had I ever allowed myself to be close to him, to be truly vulnerable?

Although my relentless questioning of my father ended when he died, years later our conversations finally became meaningful. The Spiritual Exercises of St. Ignatius helped me to see our relationship in a whole new light. Now I believe that, in heaven, he was guiding me toward religious life.

In 2015, I took my first steps on what would be a long road of discernment toward my vocation. I stalled by asking the lesser question “Where shall I go?” instead of the greater question, “Who am I?” I asked God for signs that religious life might be a route to the vocation of peace. I desired a peace that was missing in my life.

Five years later, in the last week of 2020, I went on a silent retreat for men discerning a vocation to the Society of Jesus. Because of the pandemic it was held remotely on Zoom, and I holed up for four days at a Franciscan retreat house in a cottage with a poor internet connection. Even through a grainy computer screen, the Jesuit vocation director I spoke with soon noticed that I was not at peace when describing my father’s death. I understood what he meant. In the progression of my spiritual journey, that episode still struck me as an unresolved chord.

As I discerned my vocation, I stalled by asking the lesser question “Where shall I go?” instead of the greater question, “Who am I?”

And so the vocations director invited me to have a “colloquy” with my father.

In Ignatian spirituality, the colloquy is an imagined but intimate conversation, usually with God, or Christ or Mary. It is made, St. Ignatius said, “by speaking exactly as one friend speaks to another, or as a servant speaks to a master, now asking him for a favor, now blaming himself for some misdeed, now making known his affairs to him, and seeking advice in them.” As with any conversation, there is a time for speaking and a time for listening. Periods of silence, which can be uncomfortable in everyday conversation, are ripe for discerning the movements of the Spirit.

On an overcast afternoon, I went into the garden to pray. I would later come across this line of poetry by Dorothy Frances Gurney: “One is nearer God’s heart in a garden than anywhere else on earth.” Birds kept returning to bathe in a large stone fountain. Sitting on a wooden swing designed for four people, two seats facing each other, I rocked slowly back and forth. Noticing a pile of freshly chopped wood, I wondered if the Franciscans had built this rickety swing. I counted nearly 200 rusty nails in the wood bearing my weight. My eyes wandered to a distant tree, in which the awestruck face of St. Francis of Assisi had been carved.

A colloquy is an imagined conversation, usually with God, or Christ or Mary, speaking exactly as one friend speaks to another.

Facing the empty seat before me, I tenderly asked my father to forgive me. I was the prodigal son who had misjudged time and squandered his father’s love. How did he feel about my general absence from his life and refusal to connect with him?

My father’s response came quickly: That’s not how I remember it.

It hit me like a ray of light. Immediately, I understood how he remembered it.

My father did not remember the times I had rejected or ignored him.

Instead, he remembered that I had shared with him what was dearest to me: my friends. In particular, he remembered a heartwarming July send-off to graduate school that a friend, Beth, had organized for me in the light-filled atrium at the heart of the National Portrait Gallery.

As a diverse group of people gathered joyfully around me, my father must have enjoyed the chance to talk with strangers. Perhaps he could finally see his son in a different light, not obscured by darkness. Perhaps he felt that I had begun to imitate his style of friendship, a way of being with people that Pope Francis would term as “a gratuitousness open to others.”

As I sat on the swing in the Franciscan garden, my tears of sorrow about how I had spurned my father turned into tears of joy. Before long, my father on the swing became Jesus, repeating, about my personal history of sin: That’s not how I remember it.

My tears of sorrow about how I had spurned my father turned into tears of joy.

“What does God’s mercy feel like?” the vocations director asked me after I told him about the colloquy on the swing.

To better process my own feelings, I returned to one powerful source that explains God’s mercy, the diary of St. Faustina Kowalska. Her visions had inspired the Divine Mercy devotion, in which Jesus instructed her: Immerse them in the ocean of my mercy.

Pope Francis: We all know how to pray to God the Father and Jesus. But what about the Holy Spirit?
Pope Francis

The cold showers I was taking every morning at the retreat center reminded me of swimming with a friend in the Pacific Ocean: the extreme shock and pain on first contact with the water, followed by a return to the shore feeling clean and renewed, and momentarily dry and warm.

At the retreat, as I reconciled with my father, it was as if I had been plunged into the ocean of God’s mercy, allowing me to see the depth of his love.

Pierre Thompson, nS.J., is a Jesuit novice in the U.S. West Province.