Men march against abortion in Baltimore: ‘It’s our problem.’ 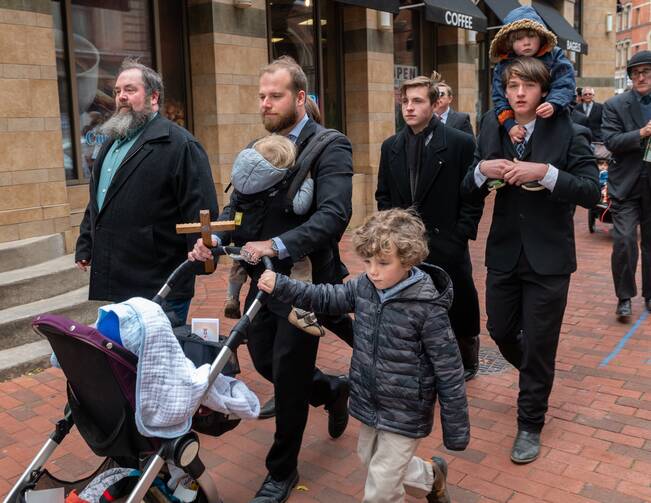 BALTIMORE (CNS) -- When Joe McClane received a phone call from an 18-year-old woman telling him she was pregnant with his child, he didn’t even remember her name.

To McClane, she was just another trophy in a long line of sexual conquests.

“That young lady was desperate for a choice,” remembered McClane, a Catholic convert from Houston, “and I gave her one and only one choice and that was to kill the baby within her womb.”

McClane agreed to pay for the abortion, driving the woman to an abortion clinic in Honolulu, where he was then stationed as a U.S. Marine in 1994. While the woman was undergoing the procedure, McClane was outside, flirting.

Hundreds of Catholic men from around the country gathered outside a Planned Parenthood clinic in downtown Baltimore Nov. 15 to pray for an end to abortion.

“I started to work my magic with one other young lady,” McClane said, “while all the while, across the street was a young woman on her back, having the child within her womb ripped to shreds because I was not a man -- because I failed to be a man in that circumstance -- to do the right thing, to defend her, to defend her dignity. I failed to be a father.”

McClane shared his story with hundreds of other Catholic men from around the country who gathered outside a Planned Parenthood clinic in downtown Baltimore Nov. 15 to pray for an end to abortion, to repent for their role in abortion and to call on all men to defend unborn life.

The marchers walked 1.6 miles from the abortion clinic to the Baltimore Renaissance Hotel, where they prayed the rosary outside the hotel where the U.S. bishops were meeting Nov. 15-18 for their fall general assembly.

Organized by the National Men’s March to End Abortion, the Baltimore event followed a similar June gathering in Washington.

They prayed the rosary outside the hotel where the U.S. bishops were meeting Nov. 15-18 for their fall general assembly.

At the request of organizers, participants wore suits to “bring dignity, class and a sense of professionalism” to their presence and to be a visual sign of unity for the event.

Many carried signs emblazoned with “Enforce Canon 915,” a section of church law that they believe requires the denial of Communion to Catholic politicians who support legal abortion.

The canon says “those who have been excommunicated or interdicted after the imposition or declaration of the penalty and others obstinately persevering in manifest grave sin are not to be admitted to holy Communion.”

In September, Pope Francis called abortion “homicide,” but also said he has never denied Communion to anyone. He urged what he called a more pastoral approach on the issue.

Many carried signs emblazoned with “Enforce Canon 915,” a section of church law that they believe requires the denial of Communion to Catholic politicians who support legal abortion.

Gabriel Vance attended the Baltimore rally with his three sons, ages 1, 3 and 5.

Pushing a stroller and transporting one of his sons in a carrier hanging from his shoulders, Vance said he wanted to show his sons how to be men who stand for Christ and work to end abortion. He believes the marchers can have an impact just by their presence.

“What we’re doing is planting seeds,” said Vance, founder of a pro-life missionary outreach in Columbus, Ohio, called Catholics for Life. “That’s going to have a greater impact on people than we can probably imagine.”

Carl Krauthauser came to Baltimore from Wilmington, Delaware, for the march. There’s a great need to awaken in men a realization of their importance to the pro-life cause, he said.

“Men bear as much responsibility as women. It’s not the woman’s problem. It’s our problem.”

“It takes two to make a baby,” he told the Catholic Review, the news outlet of the Baltimore Archdiocese. “Men bear as much responsibility as women. It’s not the woman’s problem. It’s our problem.”

Krauthauser choked with emotion as he pointed out that men are legally “taken out of the equation” when it comes to abortion.

“That’s heartbreaking,” said Krauthauser, father of five and grandfather of two. “So every time I get a chance to say, ‘No, we need to stop that,’ I will.”

Bishop Joseph E. Strickland of Tyler, Texas, gave an opening prayer outside the Planned Parenthood clinic and walked with the men to the hotel. He prayed that hearts may be touched by God’s grace.

“We ask your blessing for every woman who may visit this place,” he prayed at the clinic, “that she may be touched by your love and embrace the life within her.”

The bishop, who knelt on the sidewalk while holding his rosary as men gave their testimonies regarding their role in abortion, also prayed that those who work at the clinic will come to recognize the sanctity of life.