Survey: Priests in the U.S. are divided on politics and Pope Francis. But most agree the state of the church is ‘not so good.’ 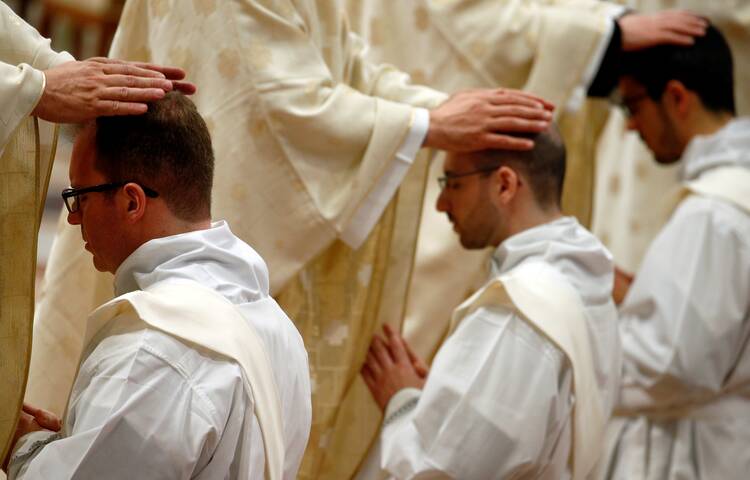 Priests put their hands on the heads of newly ordained priests during an ordination Mass celebrated by Pope Francis in St. Peter's Basilica at the Vatican May 12, 2019. (CNS photo/Yara Nardi, Reuters)

Priests on both sides of the U.S. political divide are largely pessimistic about the state of the U.S. church and its future, according to a study released on Nov. 2 and based on an email poll of 1,036 Catholic clergymen. They also view their brethren as increasingly “theologically conservative or orthodox,” thanks to younger members of the clergy. Younger U.S. priests were also notably more negative in their assessments of Pope Francis.

“Just over half [of respondents] indicate things in the Catholic Church in America are ‘not so good,’ and this holds true across the full range of the political spectrum,” wrote report co-author Brad Vermurlen, of the University of Texas at Austin, in the journal Public Discourse. “As it happens, if one segment of Catholic priests can be identified as relatively less pessimistic, it is those who call themselves politically moderate.”

Priests on both sides of the U.S. political divide are largely pessimistic about the state of the U.S. church and its future.

The “2021 Survey of American Catholic Priests” was conducted late last year and early this year by the Austin Institute for the Study of Family and Culture. Researchers emailed 50-question surveys to priests, whose names were found in the Official Catholic Directory and on the email list of an unnamed Catholic nonprofit group. Report co-authors compared the new results with a survey of U.S. priests conducted by The Los Angeles Times in 2002.

The survey found a perception that younger priests are “more theologically conservative or orthodox than their older counterparts,” writes Mr. Vermurlen. About 47 percent agreed with this statement in both 2002 and 2021, but the percentage who saw younger priests as “much more” theologically conservative rose from 29 percent to 44 percent. Conversely, “not a single priest in the 2021 survey agreed that younger priests today are ‘much more liberal’ than their older counterparts,” writes Mr. Vermurlen.

The survey found a perception that younger priests are “more theologically conservative or orthodox than their older counterparts,” writes Mr. Vermulen.

On questions about church teaching, Mr. Vermurlen writes that there was a distinct pattern in the latest polling: Priests ordained in the 1960s and 1970s were “more permissive,” and priests ordained after 2000 were “the most conservative” of any group. For example, only 56 percent of priests ordained from 1970 through 1979 agreed that “abortion is always a sin,” the lowest of any time period, but that figure peaked at 90 percent among priests ordained since 2010. There was a similar pattern for the statement that “suicide is always a sin,” with agreement ranging from 43 percent among those ordained in the ’70s to 79 percent among those ordained since 2010. (Note: The average age of priests responding to the 2020 and 2021 surveys was 61 and 59, respectively, and their average ordination year was 1991 and 1992, suggesting that the post-2010 ordination group was relatively small. The published study does not include the number of respondents in each ordination group, nor estimated margins of error.)

The survey also asked priests to assess Pope Francis, and 53 percent said they “approve strongly” of how he is handling his duties, with another 23 percent saying they “approve somewhat.” But among priests who describe their political views as “very conservative,” 69 percent “somewhat” or “strongly” disapproved. At the same time, Mr. Vermurlen writes, “not a single priest in our dataset who describes himself as liberal on politics (whether “somewhat” or “very”) disapproves of the job Pope Francis is doing.”

“That the Catholic Church is not doing well is something progressive and conservative priests agree upon, even if their reasons for saying so might be different (and they probably are).”

This split along political lines also produced divisions by age. Among priests ordained before 1980, a full 80 percent approved “strongly” of Pope Francis, with another 15 percent “somewhat” approving. The “strongly” figure declined steadily with each subsequent decade of ordinations, and only 20 percent of priests ordained since 2010 approved strongly of the pope, with another 30 percent approving somewhat.

Overall, nearly half of the respondents in the newest poll said that things were “getting worse” in the U.S. church; 28 percent said the same in the 2002 Los Angeles Times poll of priests.

In contrast to other survey questions, the decade in which priests were ordained did not seem to be a major factor here; it also did not seem to matter whether a priest leaned to the left or right in political matters.

“That the Catholic Church is not doing well is something progressive and conservative priests agree upon,” writes Mr. Vermurlen, “even if their reasons for saying so might be different (and they probably are).”

Editor’s note: In the original version of this article, Brad Vermurlen’s name was misspelled in several places.