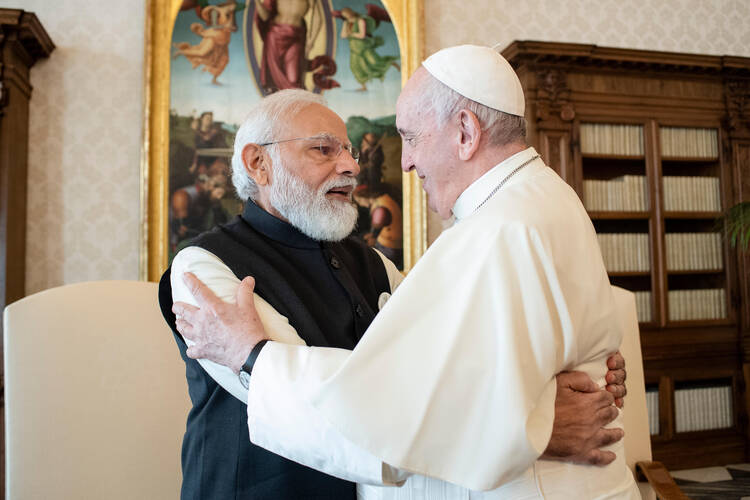 India's Prime Minister Narendra Modi, left, and Pope Francis hug on the occasion of their private audience at the Vatican on Oct. 30, 2021. Mr. Modi is in Rome for the Group of 20 summit. (Vatican Media via AP)

Indian Prime Minister Narendra Modi said he had “a very warm meeting with Pope Francis” this morning, Oct. 30, and “had the opportunity to discuss a wide range of issues with him and also invited him to visit India.”

The Indian leader broke the news of his invitation in a Twitter message along with four photographs soon after his visit to the Vatican, without revealing what they had discussed otherwise. A Vatican source, who asked not to be identified because he was not authorized to speak, told America that Vatican officials were “happily surprised” by the invitation, as they had no advance notice from either the government or from the Catholic Church in India that Mr. Modi would invite the pope to visit the country.

Pope Francis would be the third pope to visit India. Paul IV traveled to Mumbai in 1964 to attend the International Eucharistic Congress, while John Paul II visited India in February 1986 and again in November 1999, the latter time for the presentation of his Post-Synodal Apostolic Exhortation “Ecclesia in Asia.”

Vatican officials were “happily surprised” by the invitation, as they had no advance notice from either the government or from the Catholic Church in India that Mr. Modi would invite the pope to visit the country.

Because Pope Francis and the Catholic Church and Christians in India consider the visit very important, it is likely to be given priority in Vatican scheduling; it could even take place in the second half of next year, according to a source consulted by America.

Today’s meeting took place in the pope’s private library on the second floor of the Apostolic Palace in the Vatican. Pope Francis, the leader of more than 1.3 billion Catholics worldwide, and Mr. Modi, who governs the world’s largest democracy of almost 1.4 billion people, sat at a table and talked together with the aid of interpreters for 55 minutes.

The meeting was long by Vatican standards. The Vatican issued a very brief statement that revealed almost nothing of the content of their conversation except to say that they acknowledged the good relations that exist between India and the Holy See. The Holy See and India established diplomatic relations in 1948, soon after the country gained its independence.

It is likely that the two leaders discussed Covid-19 and its consequences in India, where some 456,000 people have died from the pandemic; Covid-19 has also damaged India’s efforts to combat poverty (already at 28 percent before the pandemic) on the subcontinent, an issue of deep concern for both the pope and prime minister.

Combating climate change is another concern in India and for the pope, and an issue which is on the agenda of the G20 summit in Rome, to which Mr. Modi went immediately after his visit to the Vatican.

Christians account for some 2.3 percent of India’s population (over 28 million people, including 20 million Catholics), but the Catholic Church plays a significant social role in India—especially in the fields of education and health care. One contentious issue between Christians and Mr. Modi’s political party, the Bharatiya Janata Party, is Christian proselytization in India, which Hindu fundamentalists and some politicians in the BJP have accused Christians and the Catholic Church of in the past. Pope Francis has stated clearly that the church has no intention of proselytizing in India.

Mr. Modi gave the pope a silver candlestick and a copy of The Climate Climb. Francis gave Mr. Modi a bronze plaque with the inscription “the desert will become a garden,” and copies of the pope’s writings.

The question of violence against minorities in India (Muslims and Christians especially but also other religions) is one of pressing interest for the Vatican, and so Mr. Modi’s scheduled meetings with Pope Francis’ top advisors in the Secretariat of State—Cardinal Pietro Parolin, the secretary of state, and Archbishop Paul Gallagher, the secretary for relations with states—suggested that it would be a topic of conversation during his visit. But that latter meeting had to be cut short and only allowed for a brief greeting and photo op, because Mr. Modi had to dash across the city for the opening of the important summit of the G20 leaders at 10.00 a.m.

Mr. Modi, 71, is the 14th prime minister of India but only the fifth to visit the Vatican and meet a pope since Jawaharlal Nehru first came in July 1955. Indira Gandhi, who had been part of Nehru’s team during that visit, also met Pope John Paul II in 1981 when she was prime minister. Prime Minister Inter Kumal Gujral met the same pope in 1997, as did Atal Bihari Vajpayee in 2000. Because no Indian prime minister has visited the pope over the past 21 years, today’s visit was particularly welcomed by Pope Francis. He has publicly expressed his wish to visit the country, and the Indian cardinals—on behalf of the bishops’ conference—have asked Mr. Modi several times to invite him, but while the prime minister said he would be happy to do so, he never formalized the invitation until this morning.

Mr. Modi drove in a motorcade under heavy escort to the Vatican this morning, and was welcomed in the St. Damaso courtyard by an honor platoon of Swiss Guard. Mgr. Leonardo Sapienza welcomed him, presented him to the gentlemen of the papal household, and then accompanied him to the elevator which took him to the second floor of the Apostolic Palace. Once there, he was escorted by Swiss Guards and gentlemen of the papal household to the papal library, where Pope Francis was waiting.

Pope Francis and the Prime Minister then exchanged gifts. Mr. Modi gave the pope a silver candlestick and a copy of The Climate Climb, a book that outlines India’s strategy and accomplishments in fighting climate change. Pope Francis gave the Indian prime minister a bronze plaque with the inscription “the desert will become a garden,” and copies of the pope’s writings, including his encyclicals “Laudato Si’” and “Fratelli Tutti,” as well as the “Document on Human Fraternity” and his message for the 2021 World Day of Peace.

At the end of the audience, Pope Francis escorted Mr. Modi to the door and said, “I am happy, very happy. Pray for me!” Mr. Modi responded, “I hope to see you in India.”