Top Vatican Cardinal: Joe Biden should not be denied Communion 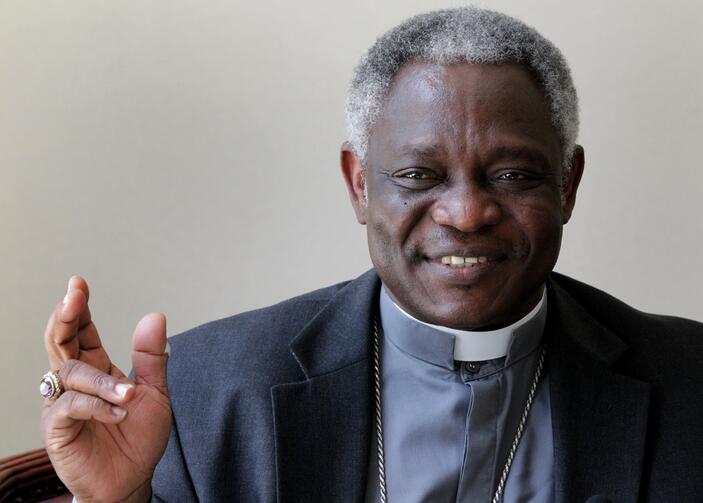 Just a couple of weeks after Pope Francis suggested that bishops should refrain from denying the Eucharist to political leaders who disagree with the church on key teachings, one of the Vatican’s most influential cardinals echoed those words.

Responding to a question about a document U.S. bishops are drafting about Communion that critics fear could be used to deny the Eucharist to some politicians, Cardinal Peter Turkson said, “The Eucharist should not in any way become a weapon.” His comments came in a wide-ranging interview on Axios on HBO.

In the interview, Cardinal Turkson, who heads the Vatican’s Dicastery for Promoting Integral Human Development, said that denying the Eucharist should be used in the most extreme cases.

“If you say somebody cannot receive Communion, you are basically doing a judgment that you are in a state of sin,” the cardinal said.

Next month, U.S. bishops are expected to vote on a controversial document about the Eucharist during their fall general meeting. In June, during a contentious debate about whether to proceed with drafting a new teaching document on the Eucharist, some bishops said they supported creating a new statement because President Joe Biden is a Catholic who supports abortion rights. While other bishops backing the document said that it would not target any specific political leader, some Catholics have expressed concern that an eventual statement could be used to ban some politicians from Communion.

Asked about the recent withdrawal of U.S. forces from Afghanistan, Cardinal Turkson said the United States had gone into Afghanistan “with vengeance” and that more diplomacy was warranted.

“If [the] U.S. had gone in first not even with a militant posture but to talk, we’d be living with a complete different situation now,” he said.

Regarding Covid-19 vaccines, the cardinal said of wealthier countries, “They can and they need to do more.”

Regarding Covid-19 vaccines, the cardinal said of wealthier countries, “They can and they need to do more.”

But he also said he “would wish to encourage heads of state and leaders in Africa to also explore traditional therapies for this.” He said leaders should “promote local herbal medication” in order to lessen reliance on vaccines.

It is unclear to which therapies or herbal remedies Cardinal Turkson is alluding. Nearly all U.S. public health officials say the best protection against hospitalization and death from Covid-19 is vaccination, and Pope Francis has been a strong proponent of vaccines. Cardinal Turkson said in the interview he harbored no doubts that being vaccinated is a wise decision.

In response to a question about the U.S. Catholics who hold public office—including the president, the Speaker of the House and a majority of U.S. Supreme Court justices—the cardinal said, “We thank God for the change...to a point that people’s faith does not constitute an obstacle to the service that they can render to a state.”

“And it’s not only the earth but also the poor. O.K.? The poor are also crying to us,” he added.

Next month, world leaders will meet in Scotland to discuss the growing climate emergency, which has been a priority for Pope Francis since the start of his pontificate in 2013. On Monday, Pope Francis joined other global faith leaders in making an appeal for politicians to take climate change seriously and expressed hope about the conference.

“COP26 in Glasgow represents an urgent summons to provide effective responses to the unprecedented ecological crisis and the crisis of values that we are presently experiencing, and in this way to offer concrete hope to future generations,” Francis said.

Asked how the church contributes to efforts to combat climate change, Cardinal Turkson said: “We do that always by appeal and encouragement. We’re gonna try to bring the cry of the poor and the cry of the earth” to the conversation.

“And it’s not only the earth but also the poor. O.K.? The poor are also crying to us,” he added.