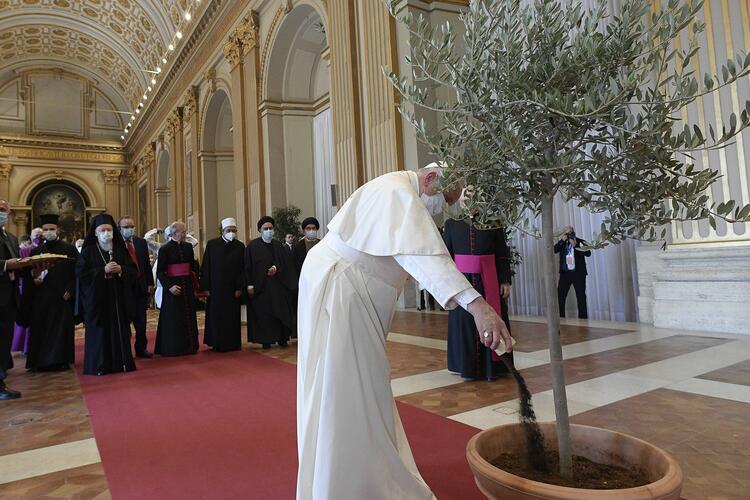 In a meeting with religious leaders at the Vatican on Oct. 4, 2021, Pope Francis adds dirt to a potted plant as a sign of unity with other religious leaders calling for action on climate change. The meeting was part of the run-up to the U.N. Climate Change Conference in Glasgow, Scotland, from Oct. 31 to Nov. 12, 2021. (CNS photo/Vatican Media)

In an unprecedented response to the “grave threat” facing all peoples worldwide from climate change, Pope Francis and some 40 faith leaders representing the world’s major religions have joined in an appeal for urgent action. Signed today, Oct. 4, in the Vatican and addressed to all governments participating in the 26th U.N. Climate Change Conference (COP26) in Glasgow, Scotland from Oct. 31 through Nov. 12, the appeal calls for decisive international political action to combat climate change and “to safeguard, restore and heal our wounded humanity and the home entrusted to our stewardship.”

The Glasgow summit aims to accelerate progress toward the goals of the Paris Agreement and the U.N. Framework Convention on Climate Change.

“Future generations will never forgive us if we miss the opportunity to protect our common home. We have inherited a garden, we must not leave a desert to our children.”

The faith leaders represent an estimated 84 percent of the world’s people that identity with a faith, and come from the main Christian denominations, the two main branches of Islam (Sunni and Shi’a), Judaism, Hinduism, Sikhism, Buddhism, Confucianism, Taoism, Zoroastrianism and Jainism. Christians present at the signing in the Vatican included Pope Francis; Bartholomew I, the Ecumenical Patriarch of Constantinople; Metropolitan Hilarion of the Russian Orthodox Church, representing Patriarch Kirill; and Archbishop Justin Welby of Canterbury, representing the Anglican Communion. Muslim representatives included the Grand Imam of Al-Azhar, Ahmad Muhammad Al-Tayyeb (Egypt) and Ayatollah Seyed Mostafa Mohaghegh Damad from the Academy of Sciences in Tehran (Iran), while the worldwide Jewish community was represented by Rabbi Noam Marans of the International Jewish Committee for Interreligious Consultations and Rabbi Daniel Swartz of the Coalition on the Environment and Jewish Life.

Six years ago, before the U.N.-sponsored climate change conference in Paris in 2015, Pope Francis published the encyclical “Laudato Si’”; that document is widely recognized as having contributed significantly to getting many governments to support the Paris Climate Agreement, in which 195 countries committed to keeping global temperature rises to below two degrees Celsius.

Today’s appeal is the result of a series of virtual monthly dialogues between faith leaders and scientists throughout 2021 that was initiated and organized by the British and Italian embassies to the Holy See in collaboration with the Holy See. Those dialogues culminated with an event this morning in the Vatican’s Hall of Benedictions at which each of the faith leaders signed the appeal. After the signing, Pope Francis handed the appeal to the COP26 president-delegate, Alok Sharma, from the United Kingdom, which is hosting the U.N. conference in partnership with Italy, and to Luigi Di Maio, the Italian foreign minister.

In brief remarks, Pope Francis thanked the other faith leaders for their presence, which, he said, “clearly shows our desire for a deepened dialogue among ourselves and with scientific experts.” Though the pope was scheduled to speak for 10 minutes, he limited his speech to two minutes and invited attendees to read his full speech in the written text provided to attendees.

“COP26 in Glasgow represents an urgent summons to provide effective responses to the unprecedented ecological crisis and the crisis of values that we are presently experiencing, and in this way to offer concrete hope to future generations,” Pope Francis wrote. “We want to accompany it with our commitment and our spiritual closeness.”

America has learned from Vatican sources that prior to his visit to COP26, Pope Francis will receive U.S. President Joseph R. Biden Jr. in a private audience on Oct. 29.

Today’s gathering, “which brings together many cultures and spiritualities in a spirit of fraternity, can only strengthen our realization that we are members of one human family. Each of us has his or her religious beliefs and spiritual traditions, but no cultural, political or social borders or barriers prevent us from standing together,” he wrote. “To illumine and direct this openness, let us commit ourselves to a future shaped by interdependence and co-responsibility.”

In their appeal, faith leaders emphasized the pressing need for urgent action in this decade, especially by countries that are mainly responsible for the carbon emissions that are causing climate change and the disasters it produces. They called for the world to limit global average temperature rise to 1.5 degrees Celsius above pre-industrial levels in the immediate future and to achieve net-zero carbon emissions as soon as possible (and not later than 2050).

They also called on wealthier nations and those with the greatest responsibility to step up their climate action at home by reducing carbon emissions and financially supporting vulnerable countries to adapt to and address climate change. The appeal also called for a transition to clean energy and to sustainable land use practices and for responsible financing of development by financial institutions, banks and investors.

“Our faiths and spiritualities teach a duty to care for the human family and for the environment in which it lives,” said the document. “We are deeply interdependent with each other and with the natural world. We are not limitless masters of our planet and its resources.”

“Future generations will never forgive us if we miss the opportunity to protect our common home. We have inherited a garden, we must not leave a desert to our children.”

More than 100 heads of state are slated to attend COP26. Pope Francis is expected to attend the opening session of the COP26 conference in Glasgow on Nov. 1, and he may also meet Queen Elizabeth II during that visit, though the Vatican has yet to confirm this. America has learned from Vatican sources that prior to his visit to COP26, Pope Francis will receive U.S. President Joseph R. Biden Jr. in a private audience in the Vatican’s Apostolic Palace on Oct. 29. President Biden will be in Italy to attend the G20 summit of heads of state in Rome on Oct. 30-31.

Correction: This article has been updated to include Rabbi Daniel Swartz of the Coalition on the Environment and Jewish Life as a participant in the Vatican climate.