John Mulaney has fallen off his nice-guy pedestal—and he might have something to teach the Catholic Church. 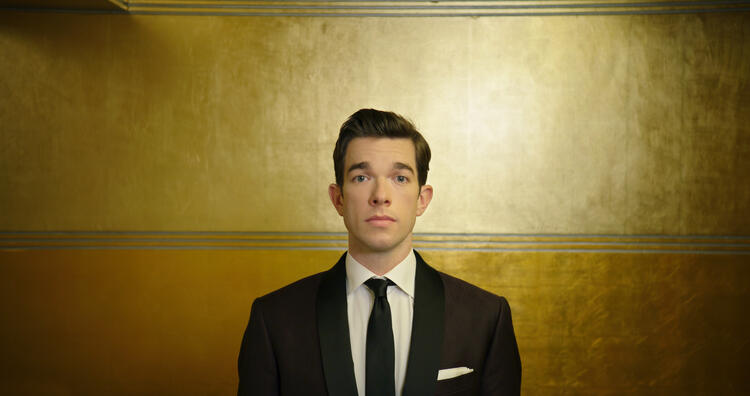 In his 2018 special “Kid Gorgeous,” the comedian John Mulaney came up with an apt metaphor for the Trump administration. “It’s like there’s a horse loose in a hospital,” he said. “I think eventually everything’s going to be O.K., but I have no idea what’s going to happen next, and neither do any of you, and neither do your parents, because THERE’S A HORSE LOOSE IN THE HOSPITAL.”

In recent months Mulaney’s own life has sadly seemed to take on a similar character, as he finished his second stint in rehab, divorced his wife of seven years, began dating actress Olivia Munn and now expects a child with her.

Social media reactions to these developments have been predictable.

Does Olivia Munn and John Mulaney's pregnancy affect me in any way? No.

Do I know either of them or Annamarie Tendler personally? Also no.

Am I weirdly offended by the announcement? EXTREMELY.

But they have also led to some interesting conversations about “parasocial relationships,” i.e., relationships that are not based in real interaction and yet nonetheless feel real. Our relationships with public figures are built out of the interaction between the personas they put forward and our own imaginations, which develop those personas in ways we may not even know we are doing.

For instance, John Mulaney built a lot of his comedy out of his relationship with his now ex-wife Anna Marie Tendler. She’s often the hero of his stories. He always presents her as smarter and more grounded than he is. To have him dump her, leap into a celebrity romance and become a baby daddy all in a couple months feels like a complete betrayal to many of his fans because on some level it is. It betrays the persona he had set up, and it betrays the guy many of us have built from that persona, which for me personally is “What if Eddie Haskell were actually a very nice guy” and for our writer Maureen Miller in 2020 was a just-out-of-reach soulmate, “my Irish twin who wasn’t to be.”

Our relationships with public figures are built out of the interaction between the personas they put forward and our own imaginations.

As I’ve been reading what has become pretty much overnight a cottage industry of think pieces about Mr. Mulaney and parasocial relationships, I’ve started to think the Catholic Church has a couple things it can learn from Mulaney’s situation. Maybe we have something we can offer him—a St. Ignatius College Prep and Georgetown University grad—too.

First and foremost: Our radically different reactions within the church to different public Catholic figures has everything to do with the different parasocial relationships we have with them.

Have you ever wondered how it is possible that some people would see the same footage and stories about Pope Francis as you and yet walk away loathing him? The easy answer of course is, “Because they’re crazy.”

But in fact they are doing the same thing that you and I are doing: interacting with the persona he presents to create a narrative of who he is, not only in the abstract but in relationship to them. I might look at the pope and see a grandpa figure who really cares about people, doesn’t take himself too seriously and is all out of patience when it comes to clericalism. But others take the same persona and build a different story.

Have you ever wondered how it is possible that some people would see the same footage and stories about Pope Francis as you and yet walk away loathing him?

And—key to this—we all do this unconsciously. As a result, often the only way we can discover that our interpretations of, say, Pope Francis are unreal is when we are confronted with a version of him that is radically different. It could be a version coming from a Latin Mass Catholic or it could be something that the pope himself says or does that challenges the way we see him. When people say “Don’t meet your heroes,” this is what they’re talking about. The real person shatters the illusions of the parasocial relationship.

So, embedded in the Mulaney story is a call to curiosity. What is the underlying fantasy relationship people have with the pope or their bishop? Or, for that matter, with James Martin, S.J., or the Nuns on the Bus? And also, what fantasy relationships have  I myself constructed?

Second: When the church or church leaders diverge from their personas, backlash is going to happen—and that’s useful.

I have heard Catholic leaders complain at times about how the press has it in for the church. “There are so many good things we’re doing, and all they want to cover is abuse, cover-up and corruption,” the story goes. “And the journalists raised Catholic are the worst of all.”

Sometimes you hear similar reactions to studies showing fewer and fewer people going to church. “It is not us; it’s them.”

When the church or church leaders diverge from their personas, backlash is going to happen--and that’s useful.

Thinking in terms of parasocial relationships, that is in fact partially true. Every Catholic (and a lot of non-Catholics) have built in their minds a personal relationship with “the church”—whether that means the little “c” church of their parish or the big “C” of the broader organization. And when the church does not live up to the image we have in our heads, we recoil.

But people’s reactions are also a bellwether for the church, just as much as they are for John Mulaney right now. They are a warning that the organization is diverging from who it says it is. And while we might want to write off our most hostile critics, in fact, oftentimes the people who are the most furious are the ones who care the most. When you break someone’s heart, they tend to get upset.

Some watching the Mulaney situation argue he has no obligation to be who people want him to be. They are absolutely right, of course. And though the church obviously has a very different mission and responsibility to its people, sometimes our leaders’ responses to criticism end up taking on a similar quality. This is not a democracy, we are told. Our image of the church is not theirs.

People’s reactions are also a bellwether for the church, just as much as they are for John Mulaney right now.

But focusing on whether John Mulaney or the church “has” to be who people want is to miss the real point that their parasocial friends are making. To quote my favorite John Hughes movie, “You’re going the wrong way.”

Last, the church has its own version of a parasocial relationship to offer Mulaney (and everybody else).

To be honest, I find the parasocial dimensions of being a priest kind of a nightmare. Even after almost 30 years in the Jesuits I do not really know how to deal with the affection or admiration of strangers. Call me “Father” in a doting way and watch how fast I run. It’s just not me.

At the same time, part of my job as a priest is to create space for a similar kind of relationship with everyone I meet. But it is not based on a persona that the people I meet present, but rather what I understand to be true, which is that we are all, in St. Ignatius’ words, “a sinner loved by God.” Or as Mulaney put it in another routine (which has been frequently memed this week), “This is an on-fire garbage can.... Could be a nursery.”

Watching Mulaney on “The Late Show” last week was very much like watching an on-fire garbage can. The look on Meyers’s face reminded me of another line from Mulaney’s 2018 Trump routine: “No one knows what the horse is going to do next, least of all the horse.”

But in the church we believe we’re all horses in a hospital at one point or another, all on-fire garbage cans. And usually it is only once we face that fact that we are able to find and sustain life.

So we are here for you, John, if you ever want to talk, no matter how or who you actually are. We are all dumpster fires of one kind or another over here. And we have seen plenty of nurseries grow from the ashes, too.