Can Catholics be honest about the sins of their saints? 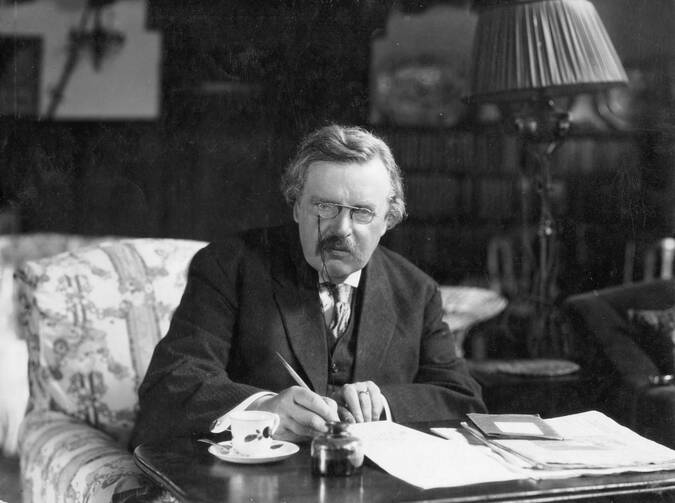 For Catholics, saints are remarkable Christian witnesses worthy of emulation. But what happens when a saint or hero is found to have acted contrary to the gospel?

Fanatic enthusiasts may try to explain it away, says Dawn Eden Goldstein, when they should be acknowledging and denouncing it. On this episode of “The Gloria Purvis Podcast,” Ms. Goldstein reflects on the life and legacy of the beloved English writer and Catholic apologist G. K. Chesterton, whose writings have inspired millions of Christians but include some controversial and discriminatory claims about the Jewish people.

Gloria and Dawn discuss why “othering” groups of people is so destructive, especially when it is done by our heroes–from the saints to the founding fathers–and how their cheerleaders can show love and appreciation for them through penance and reparations. This excerpt has been edited for clarity.

Gloria Purvis: You recently were invited by the American Chesterton society to give a lecture on “Chesterton and My Jewish Catholic Journey.” G. K. Chesterton was a giant in the English Catholic tradition in the first third of the 20th century. He played a significant role in your conversion, if I’m not misunderstanding this, to Catholicism. But some of his writings on Jews were and are extremely controversial and prejudicial. And because you probably are much more intimately familiar with Chesterton, since he played a role in your conversion, you could help some of our listeners understand: Who was G. K. Chesterton?

Dawn Goldstein: Chesterton was a British writer who was born in the late 19th century and died in 1936. I think he was about in his early sixties when he died, so he died just before World War II. He was born into a nominally Anglican family, but he as a young man had an experience, basically a sense of encountering Christ, that led him to be very strong in his Anglican faith. And over time, he was drawn to the Catholic faith and he was sort of on the fence, wanting to become Catholic for some time before he finally entered the church. And during this time, he wrote a number of books, novels like The Man Who Was Thursday, nonfiction such as Orthodoxy, which started a new revival in Christian literature in England.

G.P.: That sounds like probably a lot of why people find him attractive. To still have some kind of emotional reaction that’s pleasing, you know what I mean? It sounds like he really makes you think. Was that what attracted you to him?

Review: Reporting on religion can be dark. But we need people on the God Beat more than ever.
Daniel Burke

Why is there evil? Why is there suffering in the world? And what really moved me about The Man Who Was Thursday was that at the end, Chesterton has this character who stands for Jesus say to someone who asks him, “Have you suffered?”—his character says, “Can you drink of the cup that I drink of?” When I read that, I knew that that was a gospel verse, but I had never really contemplated that verse in terms of the possibility that God could have an interior knowledge of suffering through Jesus Christ.

You know, all my life I had seen images of the crucifixion. I had seen crucifixes, but I had never thought of God himself, somehow knowing, suffering from the inside, through Jesus. So that book really led me into my Christian journey and like Chesterton, I became an active Protestant before I was Catholic.

And even before I was Catholic, I was publicly giving interviews where I was crediting Chesterton with jump-starting my Christian journey. And so the talk that you mentioned that I gave to the Chesterton society was an important talk for me to give, because it represented some recent reflection that I’ve done on Chesterton. That’s where I’ve really been forced to reevaluate his writings and his role in my own journey.

We should be angry when we hear about people employing these tropes because it is dehumanizing. It is wrong.

G.P: I’m so glad you brought that up. And I hope it establishes for our listeners how deeply important Chesterton is to you. But they may not know what Chesterton wrote about the Jews. And I also think this is interesting because you are of Jewish heritage and had a love for Chesterton, and then finding these writings of his. So what did Chesterton write about the Jews that you think we need to know about?

D.G.: Simon Mayers goes through different stereotypes and caricatures of Jews, stereotypes such as the greedy Jew, the Jewish Bolshevik, the Jewish coward, the unpatriotic Jew, the secretive Jew, the Jewish traitor, the ugly Jew. And these are all tropes that have been used by anti-Jewish writers from medieval times or earlier that are all present in Chesterton’s writings.

Chesterton doesn’t seem conscious that he’s employing these tropes, but he does, and often employs several of these tropes in one passage. A lot of these tropes are even contrary to one another, like for Chesterton, he would accuse Jews of being communists and then would accuse them of being capitalists. And then he would even try to explain that—well, if they’re not one extreme, they’re the other, and that sort of thing.

We should be angry when we hear about people employing these tropes because it is dehumanizing. It is wrong. These tropes serve as excuses to scapegoat an entire people, an entire religion, an entire culture, and they also serve as excuses for people not to think. And in my address to the Society of G. K. Chesterton, I contrasted Chesterton’s mind and using these tropes with the many things about Chesterton that I learned that educated me morally, that were very good, positive, moral imperatives. And one of the moral imperatives that I picked up from Chesterton, from his book Orthodoxy, is where Chesterton says, “There is a thought that stops thought. That is the only thought that ought to be stopped.” Meaning, it sounds like a kind of paradox, it’s kind of like saying the only thing to fear is fear itself. But it is true that the only thought that we should not have is the idea that we should stop thinking, right?

The real sin of these stereotypes is that they are intended to stop thought, are intended to stop people from looking at every Jewish person as a unique human being. And they’re instead intended to create these frames where if people see a Jew acting in such and such a way, even a hint of that, then they’re supposed to put that Jewish person in the frame of, oh, well, this person just said something that sounds liberal, therefore this person must be a communist or this. And so on.

Far from helping Chesterton’s would-be cause for sainthood, the downplaying of Chesterton’s antisemitism hurts his cause.

But there has been—over the past several years—a push among members of the Society of G. K. Chesterton to have Chesterton canonized, and concurrent with that push has been an effort to downplay accusations of antisemitism. And my argument was that far from helping Chesterton’s would-be cause for sainthood, the downplaying of Chesterton’s antisemitism hurts his cause because what it implies is that to support Chesterton is to be in denial about antisemitism.