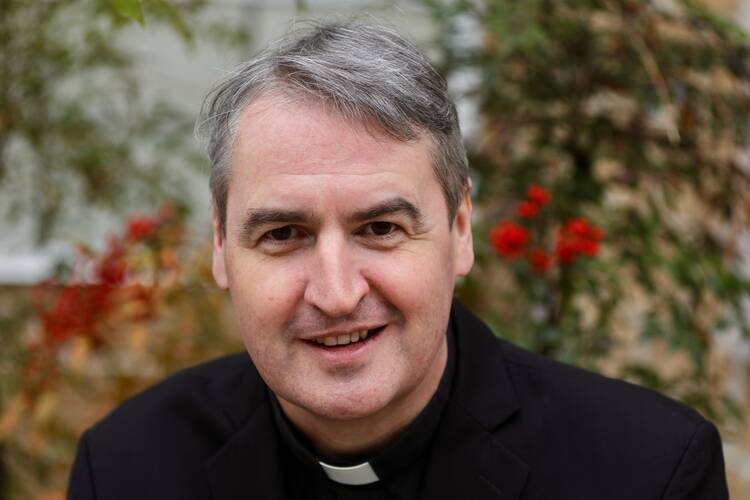 Oblate Father Andrew Small, then-director of the Pontifical Mission Societies in the United States, is pictured in Washington July 21, 2020. Pope Francis has named Father Small secretary of the Pontifical Commission for the Protection of Minors. (CNS photo/Bob Roller)

Pope Francis has appointed Andrew Small, O.M.I., a 53-year-old English priest, as the secretary of the Pontifical Commission for the Protection of Minors. The appointment is “pro tempore,” meaning his appointment is either temporary or, more likely, subject to change or development.

Father Small, a talented organizer, fundraiser and legal expert, succeeds Msgr. Robert Oliver, who returns to work in the Archdiocese of Boston after serving eight years as the secretary of the commission. The commission expressed its “heartfelt” thanks to Monsignor Oliver for his dedicated service over these years.

The Vatican broke the news on June 22. The commission said in a press statement that it was “excited” about the appointment and recalled Father Small “has worked in human rights advocacy, economic development across Africa and Latin America and the development of initiatives to increase funding for training in child protection throughout the Universal Church.”

Pope Francis has appointed Andrew Small, O.M.I., a 53-year-old English priest, as the secretary of the Pontifical Commission for the Protection of Minors. The

It said he will bring this deep experience to his role as secretary.

“I am deeply honored to be called to serve the Holy Father and God’s people as secretary of the Pontifical Commission for the Protection of Minors,” said Father Small in reaction to the appointment. “Safeguarding the youth of our church and of our communities remains one of the most urgent priorities of the church today.”

“I look forward to doing my part to help rebuild trust in a church whose mission is to protect, support and love any and all, but especially those wounded by the church’s ministers,” he said. “The Lord will accompany us in the healing that lies ahead as we continue on this most important path of safeguarding.”

Born in Liverpool, England, on April 20, 1968, Father Small studied at St. Francis Xavier College in that city before going on to study law at The University of Sheffield. He joined the Oblates of Mary Immaculate in January 1990, moved to Dublin for his novitiate, where he took first vows in 1991. He made his solemn perpetual profession of vows in 1997. He studied philosophy and theology at the Pontifical Gregorian University Rome.

“I look forward to doing my part to help rebuild trust in a church whose mission is to protect, support and love any and all, but especially those wounded by the church’s ministers.”

After being ordained priest in Liverpool in 1999, he worked in parish ministry in Rio de Janeiro, Brazil, and later in Houston, Tex. He remained in the United States, where he completed legal studies at Georgetown University Law Center and gained his LL.M. degree. He also obtained his doctorate in systematic theology at the Catholic University of America and taught international trade law, from 2006 to 2009, as an adjunct professor at Georgetown University Law Center.

Father Small, who holds U.S. citizenship, served as the U.S. Bishops policy advisor for international economic development from 2004 to 2009, after which he coordinated church recovery efforts following the earthquake in Haiti in 2010. He is a member of the Council on Foreign Relations.

The commission said that Father Small is an advocate for developing new ways for the church to evangelize in the digital age.

The Vatican appointed Father Small as the national director of the Pontifical Mission Societies in the United States in 2011, a post he held until this new appointment.

The commission said that Father Small is an advocate for developing new ways for the church to evangelize in the digital age, and recalled that as national director he oversaw the development of a peer-to-peer crowdfunding website, www.missio.org, which incorporates safe environment requirements while responding to the need to provide adequate resources for training in safeguarding in poorer countries.

Pope Francis established the commission on March 22, 2014 and appointed Cardinal Seán O’Malley as its president. It has 18 members: eight women (both vowed religious and lay) and 10 men (both lay and clerical). Its mandate is twofold: to advise the pope on effective policies for the protection of minors and vulnerable adults; and to offer support to local churches in the development of their protection policies through advice, formation, education, research and project development in the area of safeguarding.

The commission is an autonomous institution of the Holy See that responds directly to the pope and is not answerable to any Roman Curia office. Sources expect it to keep that status even under the new constitution for the Roman Curia likely to be published this September.