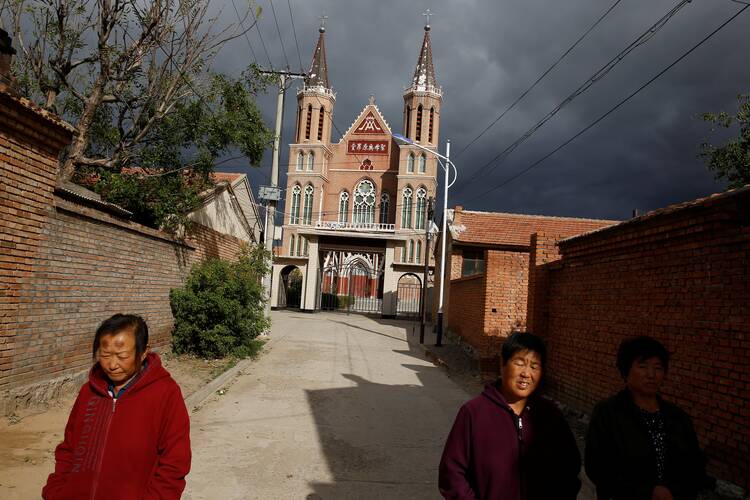 Villagers are pictured in a 2018 photo walking near a Catholic church in Huangtugang, China. (CNS photo/Thomas Peter, Reuters)

Pope Francis called on believers worldwide to pray for Christians in China as they celebrate on May 24 the feast of the Blessed Virgin Mary, Help of Christians and patroness of their “great country.”

He issued his call from his study window in the Vatican’s Apostolic Palace on May 23, the eve of that feast, after celebrating Mass in St. Peter’s Basilica on the feast of Pentecost.

In his message, he recalled that “The Mother of the Lord and of the Church is venerated with particular devotion in the Sheshan Shrine in Shanghai, and is invoked assiduously by Christian families, in the trials and hopes of daily life.”

Catholics in mainland China have the tradition of making a pilgrimage every year to pray at the Sheshan Shrine, the country’s most famous Marian shrine, especially around May 24, but in recent years the authorities have placed many obstacles to this pilgrimage and this year they have prevented any visit there during the month of May citing the coronavirus pandemic, even though amusement parks in the area are open at this same time.

Without mentioning that problem, Pope Francis said, “how good and how necessary it is that the members of a family and of a Christian community are ever more united in love and in faith! In this way, parents and children, grandparents and grandchildren, pastors and faithful can follow the example of the first disciples who, on the solemnity of Pentecost, were united in prayer with Mary as they awaited the Holy Spirit.”

His encouragement to families and members of the Christian community “to be united in love and in faith” and “in prayer” comes at a particularly difficult time for believers in the mainland. Regulations currently enforced by the Chinese authorities prohibit parents from bringing their children under the age of 18 to church or having them participate in any public events linked to the church or religion.

While May 24 has been celebrated with prayer for and with the church in China every year since 2008, one year after Pope Benedict XVI released his letter to the church in China, Francis’ message on Sunday comes at the end of a week in which a number of troubling news reports reached the Vatican.

One report published by AsiaNews revealed that on May 21, Bishop Zhang Weizhu was arrested and the previous day, May 20, seven priests and 10 seminarians—all from the “underground” church community—were arrested at a small factory owned by a Catholic and used as a seminary in Shaheqiao, Hebei province in the ecclesiastical province of Xinxiang. The owner of the factory was also arrested, and the factory was closed.

Pope Francis addressing Christians worldwide today said: “I invite you to accompany with fervid prayer the Christian faithful in China, our dearest brothers and sisters, whom I hold in the depth of my heart.”

He concluded by praying, “May the Holy Spirit, protagonist of the Church’s mission in the world, guide them and help them to be bearers of the happy message, witnesses of goodness and charity, and builders of justice and peace in their country.”