One cannonball and 500 years later: How to celebrate the Ignatian Year 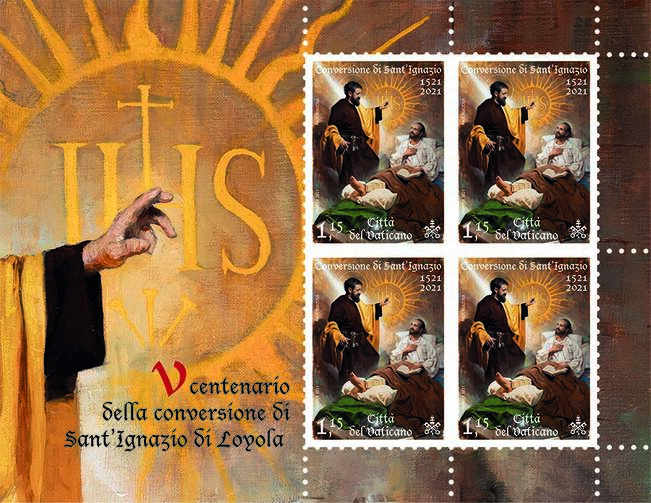 A Vatican stamp marks the 500th anniversary of the conversion of St. Ignatius of Loyola. (CNS photo/Vatican stamp and coin office)

The cannonball that hit 22-year-old Iñigo de Loyola and ended his career as a soldier was not a direct hit. It actually ricocheted off a wall. On May 20, 1521, Iñigo had rallied the Spanish troops at the Battle of Pamplona to continue to defend their citadel rather than accept harsh terms of surrender by the French-Navarres forces besieging them. Then a cannonball flew over the bulwark. A fragment of the wall hit by the cannonball flew off and injured Iñigo’s left leg, and the cannonball itself shattered his right leg.

Their most passionate and courageous soldier taken out, the Spanish troops surrendered all but immediately to the French. And everything changed for Iñigo. The wall redirected not only the cannonball and Ignatius’ life but also, you could say perhaps without exaggeration, the course of human history.

At his family castle in Loyola, Ignatius went through painful surgeries, a long recuperation and a total conversion of heart and soul. Eventually he renounced his worldly goods, lay down his sword before a statue of Our Lady of Montserrat, changed his name to Ignatius, went through tortuous confessions and bouts of scruples, traveled to the Holy Land, was kicked out of the Holy Land and eventually became a highly sought-after spiritual master. Ignatius drew to himself a small group of men who would form the core of what would become the Society of Jesus, better known today as the Jesuits. They were formed in the image not only of Christ, but also of a man whose bravery and charisma on the battlefield was simply rechanneled to a fight for souls.

On May 20, the Jesuits began the Ignatian Year, celebrating the 500th anniversary of Ignatius’ “cannonball moment” and conversion. The celebration will continue through March 12, 2022, the 400th anniversary of the canonization of Ignatius, and end on July 31, 2022, the Feast of St. Ignatius. The lay men and women who run and work at Ignatian-inspired institutions worldwide will collaborate with Jesuits in planning events, commemorations, art installations, prayer services and numerous other encounters to celebrate the year and the event of Ignatius’ conversion.

In an effort to foster a prayerful community in celebration together, America has compiled a list of events that will be updated as the year goes on.

On May 20, the Jesuits began the Ignatian Year, celebrating the 500th anniversary of Ignatius’ “cannonball moment” and conversion.

On the feast of Pentecost, which this year falls on Sunday, May 23, Father General Arturo Sosa will lead a live prayer broadcast, “Pilgrims with Ignatius.” The broadcast will bring together friends of the Society of Jesus from all over the world. You can join the prayer here.

Creative Videos from the Society of Jesus

To help pilgrims connect to St. Ignatius during this Ignatian Year, the Society of Jesus will be telling his story (and its relevance to our lives) in videos. In this video, the famous story of the cannonball that changed the path of St. Ignatius’ life is retold. Another video asks viewers to put themselves into the story and to think about the ways they see themselves and their futures, much like Ignatius prior to his defining “cannonball moment.” Additionally, throughout the Ignatian year, Jesuits and their lay collaborators will share videos from people around the world, like this one from Marlene Mannarino who will identify the “cannonball moments” that have shattered their expectations for their own lives.

Walking with Ignatius documents interviews that journalist Dario Menor held with the Superior General of the Society of Jesus. In addition to his reflections on the Society and the Ignatian Year, the book offers Father Sosa’s suggestions for reflection and prayer.

What the conversion of St. Ignatius can teach us 500 years later
Jean Luc Enyegue, S.J.

In the Pilgrim’s Company will accept submissions of original writing (fiction, one-act plays, poetry, etc.) that delve more deeply into the imagined story of one character Ignatius encounters on his journey. The first submission period runs from now until June 15, and the second submission period will run from October 1, 2021 through January 31, 2022. More details can be found here.

The Institute for Advanced Jesuit Studies at Boston College will lead a community of prayer in the footsteps of St. Ignatius—virtually. You can find more information and download the app here.