Podcast: The Vatican steps into debate over Biden receiving Communion 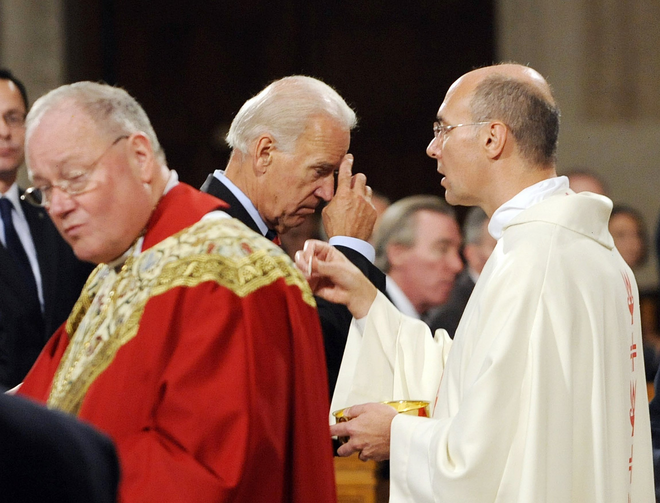 U.S. Vice President Joe Biden makes the sign of the cross after receiving Communion during a Mass at the Basilica of the National Shrine of the Immaculate Conception in Washington in this Sept. 14, 2011, file photo. In a May 7 letter, Cardinal Luis Ladaria, prefect of the Congregation for the Doctrine of the Faith, cautioned U.S. bishops about implementing a national policy on Communion for politicians who support "abortion, euthanasia or other moral evils." (CNS photo/Leslie E. Kossoff)

The Vatican stepped into the U.S. bishops’ ongoing debate over giving Communion to pro-choice Catholic politicians last week, issuing a letter May 7 to every bishop in America urging them to undertake a two-part dialogue process before drafting any national guidelines on the issue.

Up to now, the decision over whether to give a pro-choice politician Communion has been up to the local bishop, with varying results: President Joseph R. Biden’s previous local bishop in Wilmington, Delaware, along with his current bishop in Washington, D.C., have both allowed him to receive Communion, while House Speaker Nancy Pelosi’s local bishop, Archbishop Salvatore Cordileone, recently wrote in support of denying pro-choice politicians communion without naming Ms. Pelosi.

Lay people have been passing on the Catholic faith for 2,000 years. Now Pope Francis has made it an official ministry
Gerard O’Connell

Last fall, the president of the U.S. bishops assembled a committee to address the "complex and difficult situation" of working with a pro-choice Catholic president. That committee concluded that a group of bishops should draft a proposal for a guideline that could be applied nationwide, to be voted on at the bishops’ upcoming meeting next month.

The Vatican’s Congregation for the Doctrine of the Faith stepped in with a letter signed by its head, Cardinal Luis Ladaria, putting the brakes on the drafting process until the bishops undertake an “extensive and serene” dialogue with one another and the politicians in question. It urges them to reach a “true consensus” on the issue.

Will the bishops listen? This week on “Inside the Vatican,” host Colleen Dulle and veteran Vatican correspondent Gerard O’Connell unpack the letter, examining how binding the letter and the U.S. bishops’ agreements are, along with what decisions the bishops now face.

Correction 5/13/2021: An earlier version of this article mistakenly stated that the U.S. bishops assembled a committee to draft a proposal on the reception of communion. The committee was assembled by the bishops' president, and the committee was given a broader mandate but concluded that a policy proposal should be drafted. The article has been updated to reflect this change.