Who was the Venezuelan ‘doctor of the poor’ Pope Francis just beatified? 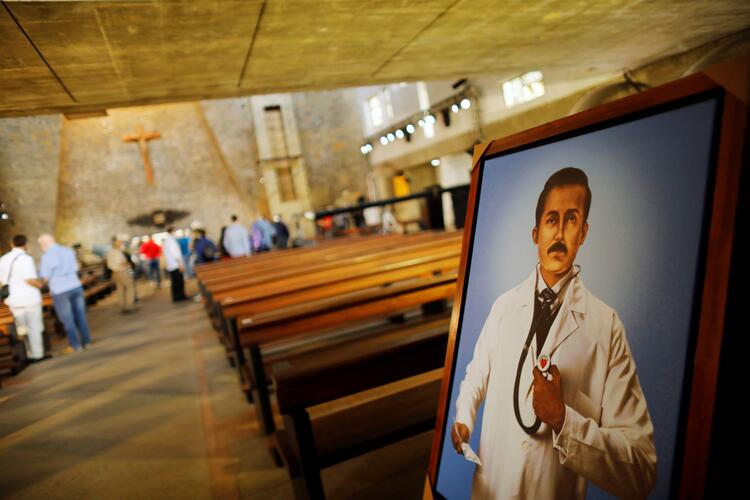 A painting of José Gregorio Hernández is displayed by the main door at the Church of Colegio La Salle in Caracas, Venezuela, April 28, 2021, during preparations for his April 30 beatification. (CNS photo/Leonardo Fernandez Viloria, Reuters)

When Venezuelans get sick it is typical for us to ask José Gregorio Hernández to intercede for us. From our youngest days, we are told about how this good and generous doctor showed special care for the poorest in our society. More than four million people have been forced to emigrate from Venezuela since the socialist-inspired revolution in 1999, escaping the precarious conditions induced by years-long political, economic and social strife. I left in 1994. Dr. Hernández is an integral part of the good I remember of my native land.

The doctor of the poor, or as we say, el médico de los pobres, was born in 1864 and died at the age of 54. He was beatified on April 30 at the Church of St. John the Baptist de La Salle in Caracas, the Venezuelan capital. Pope Francis approved his beatification in a decree he signed last June—72 years after the canonization process was first initiated.

“I know how eagerly you have been waiting for so many years the moment when the church would confirm something in which you firmly believed: that the people’s doctor stands close to God,” Pope Francis said in a video message issued by the Vatican on the eve of the beatification. Confessing he had never met a Venezuelan “who, halfway through the conversation, did not finally say to me: ‘When will Gregorio be beatified?’” the pope added: “They carried it in their souls. Well, now this wish is being fulfilled.”

When Venezuelans get sick it is typical for us to ask José Gregorio Hernández to intercede for us. From our youngest days, we are told about how this good and generous doctor showed special care for the poorest in our society.

Pope Francis captured the moment; whether in my South American homeland—devastated by poverty, violence and disease—or inside my Manhattan apartment, that indeed was the feeling. This was a long longed-for day of rejoicing and consolation for my people.

Dr. Hernández studied medicine at the Central University of Venezuela in Caracas but returned to his birth state of Trujillo to work as a physician. On completion of his medical studies in 1888, he received a grant from the Venezuelan government to further his medical studies in Paris. After two years abroad, studying experimental physiology and bacteriology, he returned home. He later founded, among others, a laboratory for experimental physiology and bacteriology, the first of this discipline in the Americas, and pioneered work in many other medical disciplines. It is thanks to him that the modern microscope arrived in Venezuela.

At a time when many saw religion and science as incompatible, Dr. Hernández possessed both deep scientific knowledge and profound Christian faith.

The beatification of José Gregorio Hernández was a long longed-for day of rejoicing and consolation for my people.

When he was 12 years old, Blessed Gregorio wrote a document titled, “Short and easy way to hear Mass with devotion.” Among his favorite books were spiritual classics, like Thomas of Kempis’s The Imitation of Christ and a biography of St. Teresa of Ávila. He repeatedly pursued a vocation to consecrated religious life but fell so ill both times that he was forced to return home. He took these setbacks as an indication that his vocation was to serve God as a physician to the most impoverished.

But Dr. Hernández never let go entirely of his dream of a religious vocation. He was a daily communicant and a Third Order Franciscan layman, committing himself to live the Gospel according to the example of St. Francis of Assisi. Beatriz Trevisi, a colleague of his, described him “as an impeccable citizen, a scholar of refined sensitivity, a deep philosopher, a Christian totally committed to the gospel and at the same time a heroic practitioner of Christian virtues despite a hostile country situation.”

Blessed Gregorio died in 1919 when he was struck by a motor vehicle in Caracas and hit his head on the edge of the sidewalk. When the accident happened, the good doctor was on his way to deliver medicine and care to a poor woman.

Dr. Hernández took these setbacks as an indication that his vocation was to serve God as a physician to the most impoverished.

More than 2,100 stories are contained in the doctor’s cause for sainthood. The miracle that led to his beatification took place on March 10, 2017, in Guárico, Venezuela.

A 10-year-old girl named Yaxury Solórzano Ortega was shot in the head by robbers attempting to steal her father’s motorcycle. After a four-hour journey to the nearest medical center and a two-day wait for surgery, she had lost critical brain mass. If she survived, her doctors said, she would suffer permanent disabilities.

Yaxury’s mother immediately entrusted her daughter to God through the intercession of the then-Venerable Gregorio. While praying, she felt the Venerable Gregorio’s hand come to rest on her shoulder speaking words of comfort: “Don’t worry everything will be alright.” To the stunned belief of her medical team, in less than three weeks, Yaxury walked out of the hospital suffering no permanent injuries. Five years later, Yaxury and her mother attended the doctor’s beatification Mass.

While praying, she felt the Venerable Gregorio’s hand come to rest on her shoulder speaking words of comfort: “Don’t worry everything will be alright.”

This lifesaving miracle causes me to reflect on the good and selfless work that countless doctors do every day, especially in developing countries like Venezuela, to bring healing and save victims of disease and violence.

The saintly, magnanimous way of Dr. Hernández can inspire us especially in this dreadful time of global medical emergency. As a physician who treated victims of the Spanish flu, Dr. Hernández ought to remind us of all the doctors, nurses, medical personnel and scientists who bravely fight Covid-19 worldwide. His beatification is a tribute to all doctors who take an oath to serve all who seek their help, without distinction. They, too, are miracle workers.

“Most of these people do not have resources,” he told his aunt María Luisa, explaining his rationale for keeping a moneybag inside his medical bag—wherein his patients could either deposit what they could afford or help themselves to funds for their daily needs. “I am not going to deny them the consultation, and I am not going to make them go through the pain of telling me that they have no money,” he said. “God will help.”

The saintly, magnanimous way of Dr. Hernández can inspire us especially in this dreadful time of global medical emergency.

Blessed Gregorio’s remains are kept in the Church Our Lady of Candelaria, where I was baptized, confirmed and received my first Communion, and where I went to Sunday Mass for over 30 years before moving to New York. My life parallels with his in many ways; some are simply silly coincidences but others carry special significance.

I’m a young man of God in a high-stress, chaotic world. St. Joseph was too.
Conor Bellone
We both studied at the Central University of Venezuela—I was a student of computer science—and found our way to New York. Dr. Hernández came for medicine; I came for dance.

After a few years working as a systems analyst at an insurance company, I traded the space bar for the barre, entering the world of professional dance as a member of two of the top dance companies in Caracas. I moved to New York in 1994 to study postmodern dance. In 1917, José Gregorio Hernández traveled to New York to study advanced bacteriology techniques. I have often wondered what churches he might have visited in New York. Maybe he worshiped at the Church of St. Francis Xavier, a Jesuit parish founded in 1847, where I am now the director of religious education?

Maybe Blessed Gregorio worshiped at the Church of St. Francis Xavier, a Jesuit parish founded in 1847.

And that is where our lives intersect meaningfully. In 2000, I was invited to give a dance theater workshop to confirmation candidates, at a time when I had stopped practicing for a few years. The experience irrevocably altered the course of my life. In this place where dance and God met, I ultimately discovered a vocation as a religious educator and a spiritual director in the Ignatian tradition. I did not leave dance entirely. Trite as it may sound, I dance for God now, serving my community as a minister of liturgical dance. Blessed Gregorio comforts me with the knowledge that God works through our passions and uses these in our service of others and to draw us closer to God’s love.

Years back, I accompanied a friend in Scarsdale, N.Y., during her two-year struggle with colon cancer. I introduced her to José Gregorio Hernández. We would meet, every Thursday, together with her family and friends, to pray and to ask for the intercession of the good doctor. After prayer, she would often prepare an incredible meal for us.

But soon the treatment took its toll, and she died in August 2019. Our prayers did not bring physical healing, but I firmly believe that a miracle that transcends matter took place. Our Thursday meetings were an opportunity to get to know each other and eventually love each other, to deepen our faith and share in the sorrows and joys of life. We prayed, laughed, cried and loved. Blessed Gregorio undoubtedly had a hand in this miracle. 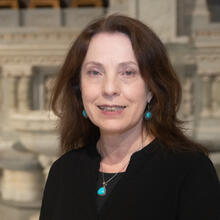 Luz Marina Díaz, Ph.D., was born in Caracas, Venezuela. She is the director of religious education at the Church of St. Francis Xavier in Manhattan, N.Y., and director of the Spiritual Direction Practicum at Fordham University’s Graduate School of Religion and Religious Education.