Pope Francis: In Jesus, there is no conflict between contemplation and action 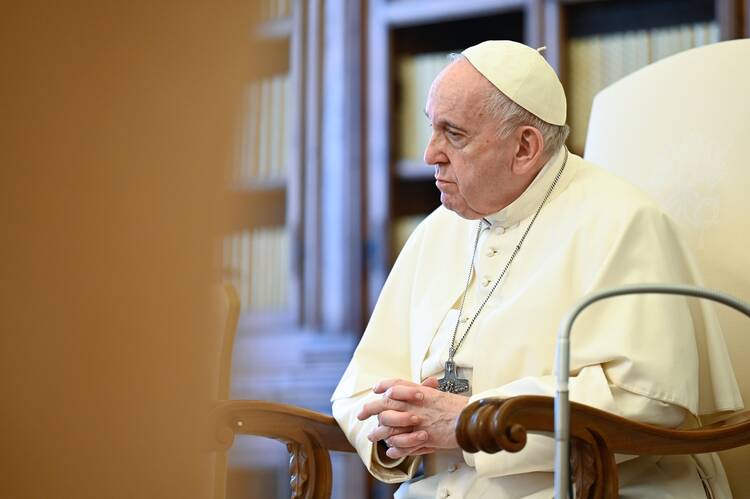 Pope Francis leads his general audience in the library of the Apostolic Palace at the Vatican May 5, 2021. (CNS photo/Vatican Media)

Below is the text of Pope Francis’ weekly Wednesday audience, delivered on May 5, 2021.

We continue the catechesis on prayer and in this catechesis, I would like to reflect on contemplative prayer.

Carlo Maria Martini, when he was sent to be the Bishop of Milan, entitled his first Pastoral Letter The contemplative dimension of life: The truth is that those who live in a large city, where everything—we can say—is artificial and where everything is functional, risk losing the capacity to contemplate. To contemplate is not primarily a way of doing, but a way of being. To be contemplative.

Everything comes from this: from a heart that feels that it is looked on with love.

And being contemplatives does not depend on the eyes, but on the heart. And here prayer enters into play as an act of faith and love, as the “breath” of our relationship with God. Prayer purifies the heart and, with it, also sharpens our gaze, allowing it to grasp reality from another point of view. The Catechism describes this transformation of the heart that prayer effects, citing a famous testimony of the Holy Curé of Ars who said this: “Contemplation is a gaze of faith, fixed on Jesus. ‘I look at him and he looks at me’: this is what a certain peasant of Ars used to say to the holy curé while praying before the tabernacle...The light of the countenance of Jesus illumines the eyes of our heart and teaches us to see everything in the light of his truth and his compassion for all men” (Catechism of the Catholic Church, 2715).

Everything comes from this: from a heart that feels that it is looked on with love. Then reality is contemplated with different eyes.

“I look at Him and He looks at me!” It is like this: Loving contemplation, typical of the most intimate prayer, does not need many words. A gaze is enough. It is enough to be convinced that our life is surrounded by an immense and faithful love that nothing can ever separate us from.

Saint John of the Cross believed that a small act of pure love is more useful to the Church than all the other works combined.

Jesus was a master of this gaze. His life never lacked the time, space, silence, the loving communion that allows one’s existence not to be devastated by the inevitable trials, but to maintain beauty intact. His secret is his relationship with his heavenly Father.

Let’s think, for example, about the Transfiguration. The Gospels place this episode at the critical point of Jesus’s mission when opposition and rejection were mounting all around Him. Even among his disciples, many did not understand him and left him; one of the Twelve harboured traitorous thoughts. Jesus began to speak openly of his suffering and death that awaited him in Jerusalem. It is in this context that Jesus climbs up a high mountain with Peter, James and John. The Gospel of Mark says: “He was transfigured before them, and his garments became glistening, intensely white, as no fuller on earth could bleach them” (9:2-3).

Right at the moment in which Jesus is not understood—they were going away, they were leaving him alone because they did not understand—in this moment that he is misunderstood, just when everything seems to become blurred in a whirlwind of misunderstanding, that is where a divine light shines. It is the light of the Father’s love that fills the Son’s heart and transfigures his entire Person.

Down with Zoom school! Up with mystics! The case for the contemplative classroom
Geoffrey Watson

Some spiritual masters of the past understood contemplation as opposed to action, and exalted those vocations that flee from the world and its problems to dedicate oneself entirely to prayer. In reality, Jesus Christ, in his person and the Gospel, there is no opposition between contemplation and action. No. In the Gospel and in Jesus there is no contradiction. This may have come from the influence of some Neoplatonic philosophy that creates this opposition, but it surely contains a dualism that is not part of the Christian message.

There is only one great call, one great call in the Gospel, and it is that of following Jesus on the way of love. This is the summit and it is the center of everything. In this sense, charity and contemplation are synonymous, they say the same thing. Saint John of the Cross believed that a small act of pure love is more useful to the Church than all the other works combined. What is born of prayer and not from the presumption of our ego, what is purified by humility, even if it is a hidden and silent act of love, is the greatest miracle that a Christian can perform.

And this is the path of contemplative prayer: I look at Him and He looks at me. It is that act of love in silent dialogue with Jesus that does so much good for the Church. Thank you.