Pope Francis issued a sweeping anti-corruption decree. How will it affect Vatican operations? 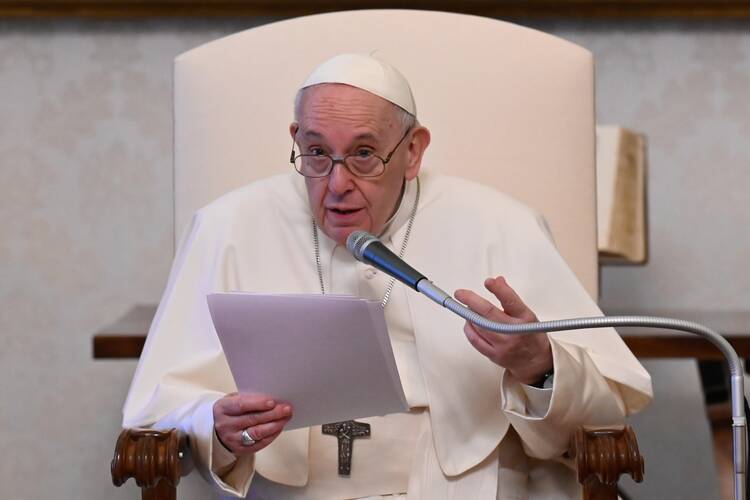 Pope Francis leads his general audience in the library of the Apostolic Palace at the Vatican April 28, 2021. (CNS photo/Vatican Media)

Pope Francis, in a new motu proprio issued April 29, continued his determined eight-year effort to reform Vatican finances. The decree lays down new legally binding norms to ensure transparency and to prevent any form of corruption by Vatican officials—both clerical and lay—involved in the management of such public finances.

With the document, the pope introduces significant changes to the “General Regulations of the Roman Curia,” which prohibit all persons employed in the Roman Curia, Vatican City State and related entities from accepting or soliciting money or gifts valued at more than 40 euros (around $50), either for themselves or for someone else.

The pope is coming down hard against corruption by any Vatican officials involved in the management, administration or oversight—including judicial oversight—of Vatican finances. Pope Francis decided to introduce this rigid code of conduct for Vatican employees as a result of what he has seen and learned since becoming pope on March 13, 2013.

During his papacy, Pope Francis has come to judge that money or gifts in kind and in various forms were given to senior officials for reasons not in keeping with the Gospel, including to promote or fast-track causes for sainthood, to win favor for an organization or association, or to influence in some way the selection or appointment of persons. He has witnessed the mismanagement of money, as seen in the purchase of the Sloane Avenue property in London, and in investments that are out of step with the church’s social doctrine. (Just this week it was revealed on Italian television that the Vatican had investments in pharmaceutical companies that produce the morning-after pill.)

The new legislation is effective immediately and takes the Vatican’s financial policies beyond the internationally agreed regulations outlined in the 2005 United Nations Convention Against Corruption, which the Vatican signed on Sept. 23, 2016. It also builds on the pope’s earlier motu proprio on May 19, 2020; that established new norms “on transparency, control and competition in the procedures for awarding public contracts of the Holy See and Vatican City State.”

The decree says that corruption “can be manifested in different manners and forms even in various sectors other than that of procurement.” Because of this, he said, “internationally accepted regulations and best practices require transparency from those holding key roles in the public sector for the purpose of preventing and combating conflicts of interest, patronage practices and corruption in general.” He added that the Holy See has adhered to the United Nations Convention Against Corruption “to conform itself to these best practices to prevent and combat corruption in its various forms.”

During his papacy, Pope Francis has come to judge that money or gifts in kind and in various forms were given to senior officials for reasons not in keeping with the Gospel.

Vatican officials, the pope said, ranging from heads of departments at the Roman Curia and those responsible for other offices or institutions to deputy directors holding five-year contracts and those with administrative, judicial or supervisory functions in the Vatican, will be obliged to sign a declaration when they are hired and every two years thereafter. They will be required to affirm that they have never been convicted by any court nor the subject of any pending criminal trials or investigations regarding corruption, fraud, terrorism, money laundering, exploitation of minors or tax evasion.

Curia officials will also be required to declare that they do not hold, even through third parties, cash or investments or stakes in corporations or companies in places included in the list of countries at high risk of money laundering (unless their relatives are residents or domiciled there for valid reasons including family, work or study). The officials of the Roman Curia must also vow that they are not linked in any way to the financing of terrorist activities, tax havens or companies whose policies are against the church’s social doctrine.

Pope Francis said Vatican officials will be obliged to sign a declaration when they are hired and every two years thereafter.

Pope Francis has assigned to the Secretariat for the Economy the responsibility to verify the written declarations by those in positions of authority and responsibility. These declarations also require such staff to attest that, to their knowledge, all assets, movable and immovable goods owned or held by them or remuneration of any kind originate from licit activities.

The decree states that in the event of false or mendacious declarations, the Vatican can dismiss the employee and require payment for any damages incurred.