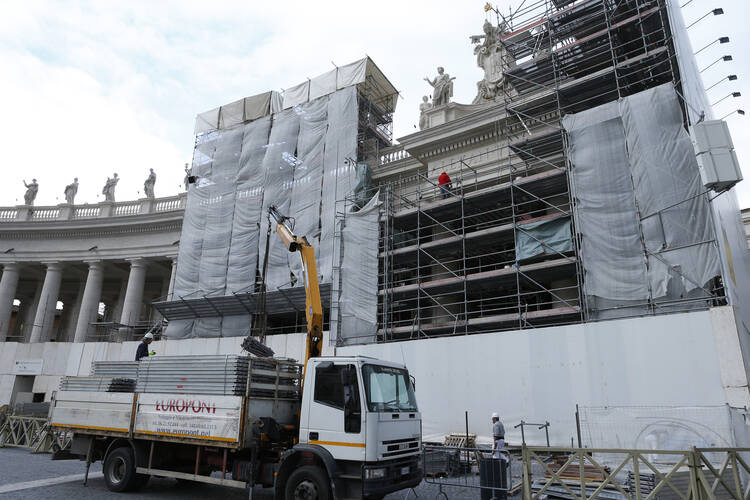 Vatican workers remove scaffolding from the final restored section of the colonnade in St. Peter's Square at the Vatican in this January 2014 file photo. Pope Francis issued a new set of laws June 1, 2020, that govern the awarding of contracts for goods and services provided by outside vendors. (CNS photo/Paul Haring)

Pope Francis has taken another significant step in his reform of Vatican finances by issuing an apostolic letter in the form of a motu proprio, or decree, regarding “transparency, control and competition in the procedures for awarding public contracts of the Holy See and the Vatican City State.”

He said the aim of the decree is to ensure “a more effective management” of Vatican resources and to “reduce in a significant way the danger of corruption” in the awarding of contracts. The decree was published by the Vatican on June 1 and comes into force in 30 days.

In his letter, Pope Francis said, “The diligence of a good father of a family is the general principle, of the utmost importance, on the basis of which all administrators are required to perform their functions.” Canon law requires this explicitly in relation to the goods of the church, he added. “The global economy and increased interdependence,” Pope Francis said, “have brought to the fore the possibility of achieving significant cost savings through the work of multiple suppliers of goods and services.”

Dr. Giuseppe Pignatone, an Italian magistrate and former chief prosecutor of Rome famous for his anti-Mafia work, whom Pope Francis appointed as president of the Tribunal of the Vatican City State last October, described the new law as “a code for contracts.”

Pope Francis said the aim of the decree is to ensure “a more effective management” of Vatican resources and to “reduce in a significant way the danger of corruption” in the awarding of contracts.

He told Vatican Media that the new legislation incorporates internationally recognized best practices “in order to achieve significant cost savings, efficient resource management and a renewed commitment against the risk of corruption.” He said it reflects “the commitment of Pope Francis against corruption, a theme that has been at the basis of so many of his interventions.”

The new Vatican legislation is in conformity with the United Nations Convention Against Corruption, signed in Merida, that came into force in 2005. It replaces previous regulations in force at the Administration of the Patrimony of the Apostolic See and the Governorate of Vatican City State and extends to all entities of the Holy See that up to now lacked their own laws governing contracts and public works.

Dr. Giuseppe Pignatone said the new legislation aims to achieve “significant cost savings as a result of a wider and more correct competition among economic actors interested [in getting the contracts].” He underlined the importance of cost savings for the Vatican at this particular moment, when both the Vatican and the world economies are in great difficulty, as the prefect of the Dicastery for the Economy, the Rev. Juan Antonio Guerrero Alves, stated recently.

The new Vatican legislation is composed of 86 articles and an additional 12 articles relating to juridical protection in cases of litigation.

Article 1 states that the purpose of these new norms is to “regulate the procedures regarding contracts related to the acquisition of services, supplies, works and projects” in the Vatican and the Holy See. It aims to do so through “the sustainable use of internal funds; transparency of procedures for awarding [contracts]; equal treatment and nondiscrimination of tenders; the promotion of effective competition between the tenders, in particular through measures capable of combating illegal competition agreements and corruption.”

The fundamental principles underlying the new legislation are outlined in Article 5. They include ethical considerations throughout, in accordance with the social doctrine of the church, as well as “cost savings, effectiveness and efficiency” together with “planning and rationalization of expenditure” and “transparency, objectivity and impartiality in the award procedure.”

Article 7 lays down strict norms against conflict of interests, illegal competition agreements and corruption. The aim is to avoid “any distortion of competition and ensure equal treatment of all economic operators.”

The new legislation decrees “motives for exclusion” of economic operators from applying for or being awarded contracts (Articles 12 and 13). These include participation in a criminal organization, corruption, fraud, crimes connected to terrorist activity, recycling of monies from criminal activities, exploitation of child labor, forms of trafficking or exploitation of human beings, not paying taxes or social security obligations in the country of residence or incorporation, or being a resident of, or incorporated in, tax havens.

A key part of the new legislation decrees the “centralization” of “the acquisition of all goods and services” in the Vatican City State and the Holy See “under penalty of nullity of the relevant contract” (Article 15). It says the “centralized authorities” who will act on this include the Administration of the Patrimony of the Apostolic See “in matters concerning the Dicasteries of the Roman Curia” and “the institutions connected to the Holy See,” and the governorate in relation to its branches.

Article 18 says the Secretariat for the Economy will publish and update every six months “the list of prices and the reference fees for goods and services,” together with the labor costs of the professionals registered in the register drawn up by the secretariat. These will take into consideration prices and fees in the markets where the Vatican institutions are supplied.

The motu proprio devotes an entire chapter—Articles 36 through 56—to the procedure for announcing and awarding the contracts. Pope Francis said the new legislation takes into account the fundamental principles and aims of Canon Law and the peculiar nature of the Vatican City State.