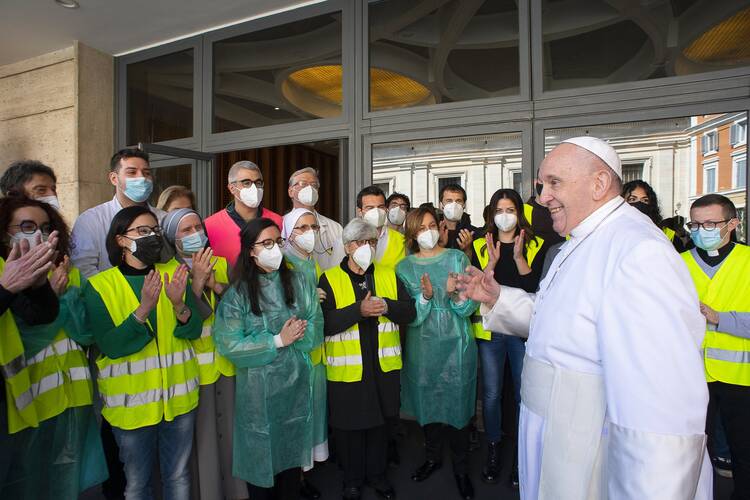 Pope Francis greets people assisting with the second dose of COVID-19 vaccinations for some 600 vulnerable people and their caregivers in the Paul VI hall at the Vatican April 23, 2021. The Vatican press office said those present sang their best wishes to the pope to mark his name day, the April 23 feast of St. George. The pope was born Jorge Mario Bergoglio. (CNS photo/Vatican Media)

VATICAN CITY (CNS) -- Celebrating his name day, the feast of St. George, Pope Francis was serenaded by hundreds of Rome's most vulnerable residents and the people who assist them.

The pope, who was born Jorge Mario Bergoglio, marked his birth saint's feast April 23 by visiting people who came to the Vatican for the second dose of their Covid-19 vaccinations.

Close to 600 people were scheduled to receive the inoculations throughout the day. Photos of the pope with the special guests and Cardinal Konrad Krajewski, the papal almoner, showed stacks of sandwiches, fruit juice and cookies, as well as a large chocolate Easter egg, which was cracked and shared.

The pope, who was born Jorge Mario Bergoglio, marked the Feast of St. George April 23 by visiting people who came to the Vatican for the second dose of their Covid-19 vaccinations.

Pope Francis personally greeted those waiting for their shots in the atrium of the Vatican audience hall as well as those who had just received the vaccine and were under observation in case of an allergic reaction.

"As he left, those present sang" their best wishes to the pope for his name day, the Vatican press office said.

Pope Francis also greeted the volunteers helping run the vaccine clinic, encouraging them to continue with their commitment to the poor, the press office said.

The Vatican said that about 1,400 people among the homeless, the poor and the particularly vulnerable -- as well as the volunteers who assist them -- had received the first dose of the vaccine from the Vatican; the remaining 800 will get their second doses in the next few weeks.

[Read this next: Pope Francis says praying out loud isn’t just for children.]