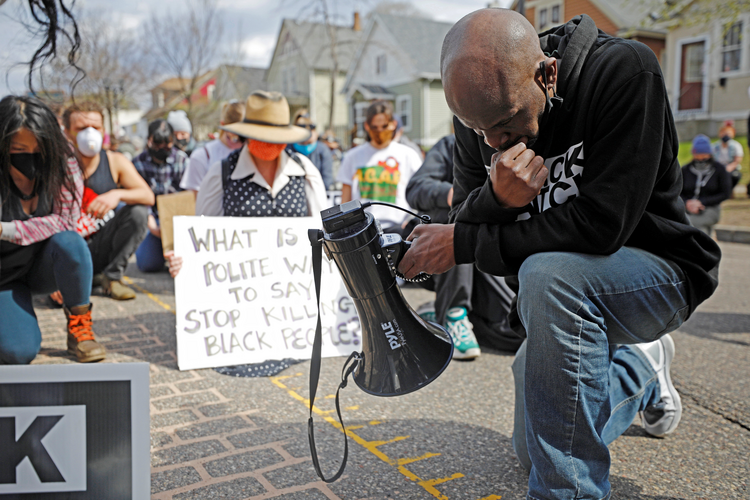 Demonstrators in St. Paul, Minn., kneel for a moment of silence April 18, 2021, after learning of another police-involved shooting elsewhere in the U.S. The march was held the weekend before closing arguments in the Derek Chauvin trial and as protests continued demanding justice for Daunte Wright. (CNS photo/Nick Pfosi, Reuters)

ST. PAUL, Minn. (CNS) -- As closing arguments began April 19 in the trial of former Minneapolis police officer Derek Chauvin in the death of George Floyd, Archbishop Bernard A. Hebda and priests across the Archdiocese of St. Paul and Minneapolis offered special Masses "For the Preservation of Peace and Justice."

Addressing a congregation of about 120 people at the Cathedral of St. Paul's 7:30 a.m. daily Mass in St. Paul, the archbishop referred to the multiplication of the loaves and fishes in St. John's Gospel and Philip's temptation to do nothing in the face of the challenge to feed the crowd.

Like Philip, people might feel the magnitude of problems in today's society are too overwhelming, and be tempted to do nothing at all in the face of them, the archbishop said.

"We can't control what happens in the trial," the archbishop noted. "We can't single-handedly force healing to those who feel the wounds of racism in our land. We can't bring George Floyd back to life, or Daunte Wright back to life. Does that mean that we do nothing? Absolutely not.

"We each have to offer our five loaves and two fish, no matter how meager," he said. "We gather this morning to do just that. To offer our humble prayers. They're pretty meager. They're not much different than the loaves and fish. But we offer them to Jesus, and let him work the miracle."

"We can't control what happens in the trial," the archbishop noted. "We can't single-handedly force healing to those who feel the wounds of racism in our land. We can't bring George Floyd back to life, or Daunte Wright back to life. Does that mean that we do nothing? Absolutely not."

The archbishop asked all priests in the archdiocese to preside at such a Mass -- No. 30 in the General Instruction of the Roman Missal -- on the same day, and join their prayers and the prayers of their congregations with his as people in the Twin Cities prepare for a verdict in Chauvin's trial and as tensions continue in the April 11 death of Wright, like Floyd, an African American, during a traffic stop in Brooklyn Center.

Floyd died while being arrested after a store clerk accused him of trying to pass a counterfeit $20 bill. Wright struggled with officers trying to arrest him after they learned he had an outstanding warrant.

Police have said it appears that Brooklyn Center, Minnesota, police officer Kimberly Potter, who has since resigned, mistook her gun for a Taser, shooting Wright once in the chest. Chauvin and Potter are white.

Floyd's death was captured on a bystander's video that went viral. Both incidents were caught on police body camera videos that have been released. The deaths of Floyd and Wright sparked local and national protests and riots.

Throughout Chauvin's trial and in the wake of Wright's death, police and Minnesota National Guard units have been activated in the Twin Cities to help maintain peace.

Over the three-week Chauvin trial, the jurors heard dozens of witness testify; after closing arguments, they were being sequestered for their deliberations.

In his homily, Archbishop Hebda recalled when he first began serving at Mass, in about the fourth grade, and being intrigued by the priest offering one drop of water to the chalice during the presentation of the gifts for consecration.

He asked about that, and the priest explained that it represented people's offering their sacrifice to the sacrifice of Christ.

"That drop, one drop in a whole chalice, might seem inconsequential," the archbishop said. "But the priest is required to do that at every Mass. We'll do that here, this day. We give the little that we have, and it's Jesus who does the rest."

The archbishop assured the congregation that God hears people's prayers, and he closed his homily with one:

"Let us pray that he would send down his wisdom and prudence on the jurors, who have been given the weighty responsibility of deciding Mr. Chauvin's guilt or innocence; that he would help us to receive the verdict with peace; that we would open our hearts to whatever conversion is needed there and that he might continue to bless our cities and our communities with the fruits of the peace and justice that only he can bring."

Joe Ruff - Catholic News Service
Provide feedback on this article
Join the conversation: Login or create an account
Before you can comment, you need to update your profile to include your first and last name, as required in our comments policy. Then reload this page and you'll be set up for commenting. Update your profile