‘Why is Jesus covered in popcorn?’: Memories of Vietnamese Catholic Holy Week in New Orleans 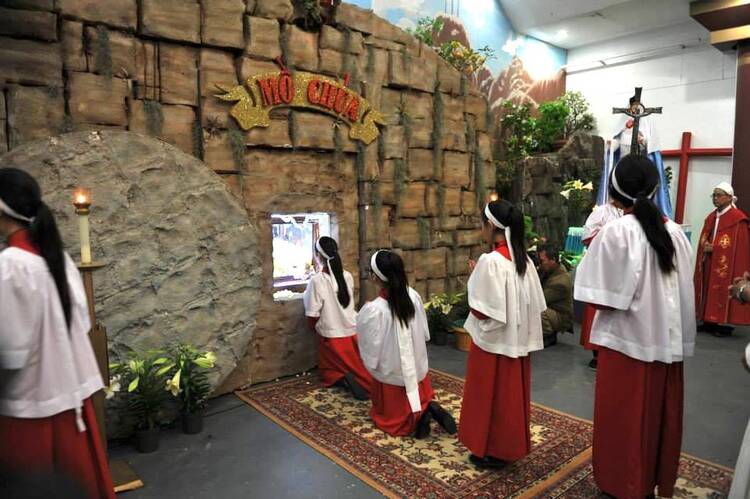 One Holy Saturday morning, my mother took me to church to kiss the bloody feet of Jesus. I was 6 or 7 years old at the time. When we arrived at the church, I saw the regular and occasional churchgoers, young and old, also waiting in line to venerate the Lord. Many tied white cloth headbands around their heads, a Chinese tradition that signifies the mourning of a teacher or family member. White, for many Asian communities, is associated with death.

As I stood in line with my mom, I could see from a distance Jesus’ bloody feet sticking out of a glass coffin. The coffin was lit with fluorescent lights and Christmas lights, and it was filled with fluffy, white popcorn. Yes, popcorn—unsalted and unbuttered, but blessed and perfumed. It covered Jesus’ entire body except for his head and feet. I felt thrilled, curious and frightened, but at the time, I didn’t know this tradition was unique. I just knew I wanted to see Jesus, and then I didn’t.

Every parish observes these traditions a bit differently, and some changes have been made this year to ensure the safety of parishioners during the Covid-19 pandemic. But in general, these services begin in the evening and include a living Way of the Cross involving an elaborate re-enactment of the 13th station (Jesus is taken down from the cross) and the 14th station (Jesus is laid in the tomb). The ceremony is reminiscent of the tender preparation of the body of a deceased loved one, followed by a funeral procession and solemn visitation.

My childhood parish, Mary Queen of Vietnam, established in 1983, was the first Vietnamese-American Catholic parish in the country.

“Why is Jesus covered in popcorn?” I asked my mom. “Because it makes everything look bright and beautiful,” she told me. Some say it was because, in the past, missionaries used popcorn to attract people to religious services. Others thought it was because it looked like the flowers used to embellish the churches in Vietnam during Holy Week. Someone once told me the popping of popcorn represented the resurrection.

The coffin laid inside a giant tomb that the parishioners made from commercial trash bags and aluminum foil, spray-painted black and gray to look like sturdy stones. In the background was a massive mural depicting Jerusalem. Palm leaves weaved into crosses alongside small trees with strings of popcorn wrapped around them decorated the path toward Jerusalem.

In front of the tomb, women in traditional, white funeral garments stood next to a life-size statue of the Sorrowful Mother, also dressed in funeral garments. For hours, the women at the tomb intoned mournful and eerie chants—a chorus of wailing voices, rising and falling, falling and rising, from the depths up to heaven and back down again.

Many families in Vietnam still bathe and dress their beloved dead, and the deceased lies in state at home until the day of the funeral. It is no wonder that the 13th and 14th stations take such a prominent place for many Vietnamese Catholic communities during Holy Week.

As Holy Week approaches every year, I reminisce about attending Jesus’ “wake and funeral” and seeing him coming back to life at the parish of my childhood.

On the evening of Good Friday, the “Removal of the Nails and Burial of Jesus” (“Nghi thức tháo đinh táng xác Chúa Giêsu”). Tenebrae service follows the living Way of the Cross. Fifteen candles line up in the shape of a triangle above a larger-than-life crucifix. Cantors dressed in traditional áo dài take turns chanting “The Fifteen Meditations on the Passion of Christ (Lamentations)” (“Ngắm 15 sự thương khó Đức Chúa Giêsu”) in a heart-wrenching way, evoking empathy for Jesus and Mary and sorrow for sin. The 11th meditation reads: “When the soldiers nailed him to the cross, it was also as if they put nails through Mary’s heart, because she loved her son above all else.”

While transitioning from one lamentation to the next, the sounds of traditional instruments such as wooden clappers, cymbals, drums and gongs respond to one another. They accompany the congregation’s tonal recitation of prayers, borrowed from Buddhist chanting techniques. A wave of heavenly and human sound intertwined, rising and falling, falling and rising, fills the church and the hearts of those present.

After the 15th meditation, men dressed in funeral garments march in two lines toward the crucifix. Some climb up ladders to take down the corpus from the cross, while others carry in a glass coffin. Jesus’ arms are removed and placed next to his sides. Every touch and movement is intentional, intimate and tender. The men then wrap the statue of Jesus in white linen and place him into the coffin. The coffin is placed on an ornate float lit with nylon lights. As the float leaves the church on the men’s shoulders, the weeping women, all dressed in white, follow behind the coffin with the Sorrowful Mother, also carried on another float. Each person in the congregation takes a lighted candle and follows behind Mary for the procession around the church property and toward the tomb.

Following the Stations of the Cross—digitally
America Staff

After the procession, the coffin is filled with popcorn and placed into the tomb. An opening at one end of the coffin allows access to Jesus’ bloody feet. The “Visitation of the Lord’s Body and Kissing of the Feet” (“Viếng xác và hôn chân Chúa”) begins. The faithful line up to venerate Jesus’ body, and this goes from Good Friday evening until the afternoon of Holy Saturday. By then, those guarding the tomb close and seal it, and Jesus’ feet can no longer be seen.

As people walked closer to the coffin, they got down on their knees and crawled toward Jesus’ feet. One by one, after kissing his feet, the faithful made the Sign of the Cross and grabbed a handful of blessed popcorn, which tasted like styrofoam. Everyone kissed the same blessed feet and stuck their unsanitized hands into the same pile of blessed popcorn, and the threat of germs never seemed to bother anyone.

When it was almost my turn, I saw the blood more clearly and began to feel nauseous. I squeezed my mother’s hand and started crying.

“Do you want popcorn?” she asked.

“Then, you have to kiss his feet.”

I can still smell the blessed popcorn.

At Mary Queen of Vietnam, the Easter Vigil takes place outside with the altar placed in front of the tomb. Hundreds of families file onto the church grounds with vigil candles. After the lectors finish the seven Old Testament readings, the congregation can hear the recorded sound of rocks rumbling and tumbling. Different color lights start to flash in front of the tomb and a fog machine fills the sanctuary with smoke. Then the rock in front of the tomb opens and a statue of the resurrected Jesus slowly rises up until his feet are above everyone’s head. Banners reading “Alleluia” drop down, bells ring from all directions, and the parish’s three choirs sing the Gloria. All the while, the congregation clap their hands without ceasing.

It has been almost 20 years since I left New Orleans to join the Jesuits, and there are few things I miss more than Holy Week at my home parish. There I received my first introduction to the Catholic faith that was tangible and vividly incarnational. Often, the unconventional was also the traditional. Faith went beyond simplistic Christian vs. pagan, sacred vs. secular, real vs. imagined, physical vs. spiritual dichotomies. Faith was not always sanitary, but it was never sterilized. As Holy Week approaches every year, I reminisce about attending Jesus’ “wake and funeral” and seeing him coming back to life at the parish of my childhood. I can still smell the blessed popcorn. 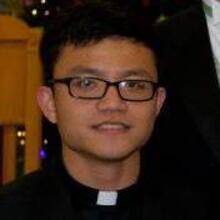 Quang D. Tran, S.J., is a doctoral candidate in counseling psychology at Boston College. Many thanks to Tony Tran, parish coordinator at Mary Queen of Vietnam parish, for consulting on this article.