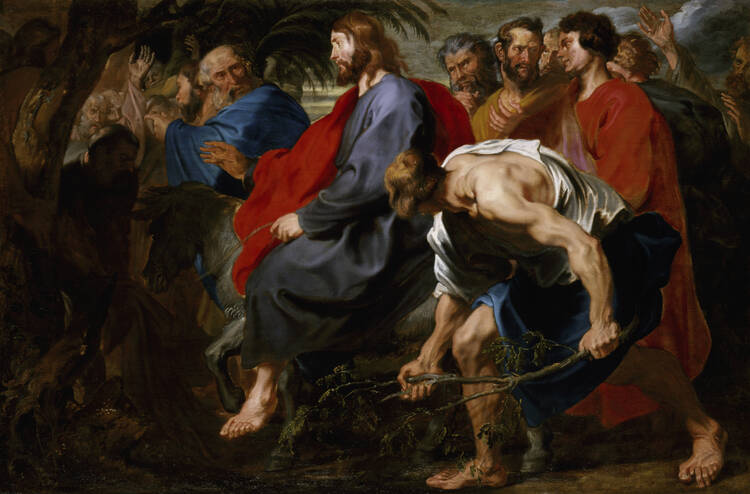 A Reflection for Palm Sunday

If the Passion of St. Mark’s Gospel were a murder mystery, the colt would be the key. Seems odd, doesn’t it, that Jesus, for the first and only time in the narrative, offers detailed instructions for the sort of rendezvous one might expect in a spy novel?

Go into the village opposite you,
and immediately on entering it,
you will find a colt tethered on which no one has ever sat.
Untie it and bring it here.
If anyone should say to you,
“Why are you doing this?” reply, “The Master has need of it and will send it back here at once” (Mk 11:2-3).

How does Jesus know to expect a tethered colt “on which no one has ever set”? If challenged, the disciples are to say that ho kyrios needs it. Here the Greek is translated as “the master,” but more typically it is rendered as “the Lord,” the Septuagint’s title for God.

Jesus bears witness to the truth as he allows himself to be proclaimed the messiah.

St. Mark has left too many clues for us to miss his meaning. Pilgrims typically entered Jerusalem on foot. Why will Jesus be mounted? Because that is how kings enter their cities. Jesus claims the holy city of Jerusalem, bearing witness to the truth of his life, his deepest identity. He is the messiah, but this king comes in humility, not power; he comes to suffer, not to reign.

Exult greatly, O daughter Zion!
Shout for joy, O daughter Jerusalem!
Behold: your king is coming to you,
a just savior is he,
Humble, and riding on a donkey,
on a colt, the foal of a donkey (Zech 9:9).

The Scriptures stipulated that an animal consecrated to God could not be put to a secular use. Only a colt “on which no one has ever set” is worthy to carry Christ, the anointed king of Israel, into the holy city. And could there be a more sacred purpose than his sacrificial death?

St. Mark’s Gospel presents itself as something of a mystery thriller. In chapter after chapter, no one truly discerns the identity of this man. Yet now, at the beginning of his Passion, Jesus bears witness to the truth as he allows himself to be proclaimed the messiah. Yet even as he does so, Christ leaves pointers we are meant to pursue: the rendezvous, the unridden colt, the triumphal entry into Jerusalem. We are to follow these clues all the way to the foot of the cross, where all will be revealed. Not in pomp and parade but in the Passion of the Christ, God’s great revelation of self.

The veil of the sanctuary was torn in two from top to bottom.
When the centurion who stood facing him
saw how he breathed his last he said,
“Truly this man was the Son of God!” (Mk 15:38-39).