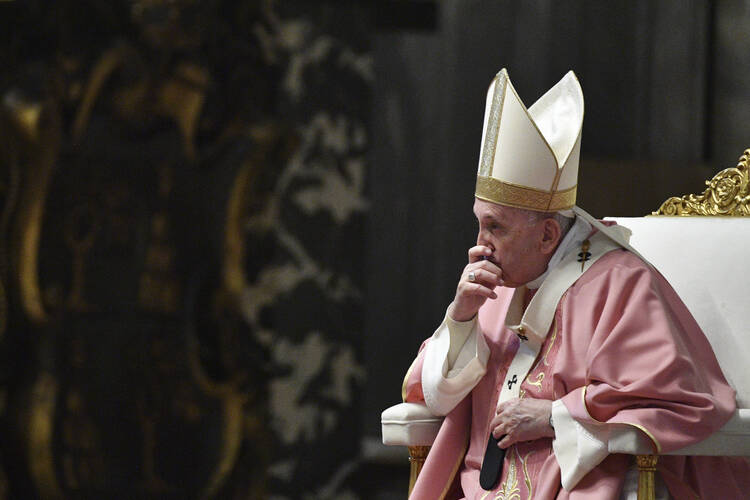 Pope Francis celebrates mass on the occasion of 500 years of Christianity in the Philippines, in St. Peter's Basilica, at the Vatican, Sunday, March 14, 2021. (Tiziana Fabi/Pool photo via AP)

The Vatican Congregation for the Doctrine of the Faith has issued a statement in which it declares that “the church does not have, and cannot have, the power to give the blessing to unions of persons of the same sex.” It said Pope Francis “was informed and gave his assent” to its publication.

The C.D.F. used the classical “response to a question [dubium]” format to address this sensitive question. It asked: “Does the Church have the power to give the blessing to unions of persons of the same sex?” It answered: “Negative.”

The C.D.F. provided an “Explanatory Note” in which it clearly states that homosexual persons must be accompanied and valued for the positive things in their relationships. The note also says it is permissible to bless homosexual individuals “who manifest the will to live in fidelity” with church teaching. It insists that its position does not involve any discrimination, stating the church “does not have the power to bless unions of persons the same sex.”

The Vatican Congregation for the Doctrine of the Faith has issued a statement in which it declares that “the church does not have, and cannot have, the power to give the blessing to unions of persons of the same sex.”

America has learned that the issue “was not discussed” in the monthly plenary meeting of the members of the congregation because such meetings have not been held for some time due to the coronavirus pandemic. Consequently, it appears that the matter was discussed only by a small group of some top C.D.F. officials. It was then presented to the pope by the Italian-born secretary of the congregation, Archbishop Giacomo Morandi, at an audience. The C.D.F. note says Pope Francis “was informed and gave his assent to the publication of the above-mentioned dubium, with the annexed Explanatory note.”

It is not clear why the issue was raised now, but sources in Rome and elsewhere contacted by America suggest that one reason may have been the fact blessings for same-sex unions has been discussed by some German bishops during their ongoing “synodal journey,” and the C.D.F. wished to preclude this possibility in advance. Another source suggests it may have been triggered by the confusion that followed the statements attributed to Pope Francis in the documentary made by the Russian-born Jewish film director, Evgeny Afineevsky. The C.D.F. has not clarified the reason why it has addressed the question at this time.

The explanatory note said that “in some ecclesial contexts, plans and proposals for blessings of unions of persons of the same sex are being advanced,” and these are “not infrequently motivated by a sincere desire to welcome and accompany homosexual persons, to whom are proposed paths of growth in faith, ‘so that those who manifest a homosexual orientation can receive the assistance they need to understand and fully carry out God’s will in their lives,’” as Pope Francis wrote in “Amoris Laetitia,” his apostolic exhortation on marriage and family life.

It insists that its position does not involve any discrimination, stating the church “does not have the power to bless unions of persons the same sex.”

The explanatory note recognizes that “on such paths, listening to the word of God, prayer, participation in ecclesial liturgical actions and the exercise of charity can play an important role in sustaining the commitment to read one’s own history and to adhere with freedom and responsibility to one’s baptismal call, because ‘God loves every person and the Church does the same’, rejecting all unjust discrimination.”

The C.D.F. explains that “sacramentals,” including blessings, “are sacred signs that resemble the sacraments: they signify effects, particularly of a spiritual kind, which are obtained through the Church’s intercession.” Drawing on the Catechism of the Catholic Church it says, “Sacramentals do not confer the grace of the Holy Spirit in the way that the sacraments do, but by the Church’s prayer, they prepare us to receive grace and dispose us to cooperate with it.”

In this context, it says “blessings are signs above all of spiritual effects that are achieved through the Church’s intercession.”

The C.D.F. explains that “when a blessing is invoked on particular human relationships, in addition to the right intention of those who participate, it is necessary that what is blessed be objectively and positively ordered to receive and express grace, according to the designs of God inscribed in creation, and fully revealed by Christ the Lord.”

It concludes that “only those realities which are in themselves ordered to serve those ends are congruent with the essence of the blessing imparted by the Church.”

“Only those realities which are in themselves ordered to serve those ends are congruent with the essence of the blessing imparted by the Church.”

For this reason, the C.D.F. states that “it is not licit to impart a blessing on relationships, or partnerships, even stable, that involve sexual activity outside of marriage (i.e., outside the indissoluble union of a man and a woman open in itself to the transmission of life), as is the case of the unions between persons of the same sex.”

It adds that “the presence in such relationships of positive elements, which are in themselves to be valued and appreciated, cannot justify these relationships and render them legitimate objects of an ecclesial blessing, since the positive elements exist within the context of a union not ordered to the Creator’s plan.”

Furthermore, it says that “since blessings on persons” are related to the sacraments, the “blessing of homosexual unions cannot be considered licit as it would in some way constitute an imitation or reference of analogy with the nuptial blessing, invoked on the man and woman who unite in the sacrament of Matrimony.” Then, quoting Pope Francis in “Amoris Laetitia,” it states, “There is no foundation for assimilating or establishing analogies, not even remote, between homosexual unions and God’s plan for marriage and the family.”

The C.D.F. insists that “the declaration of the unlawfulness of blessings of unions between persons of the same sex is not therefore, and is not intended to be, a form of unjust discrimination, but rather a reminder of the truth of the liturgical rite and of the very nature of the sacramentals, as the Church understands them.”

Then moving in a more positive direction, the C.D.F. says, “the Christian community and its Pastors are called to welcome with respect and sensitivity persons with homosexual inclinations and will know how to find the most appropriate ways, consistent with Church teaching, to proclaim to them the Gospel in its fullness.” At the same time, it says, “they should recognize the genuine nearness of the Church—which prays for them, accompanies them and shares their journey of Christian faith—and receive the teachings with sincere openness.”

At the same time, “it declares illicit any form of blessing that tends to acknowledge their unions as such” because in this case “the blessing would manifest not the intention to entrust such individual persons to the protection and help of God, in the sense mentioned above, but to approve and encourage a choice and a way of life that cannot be recognized as objectively ordered to the revealed plans of God.”

At the same time, the C.D.F. acknowledges that “God Himself never ceases to bless each of His pilgrim children in this world, because for Him ‘we are more important to God than all of the sins that we can commit.’” But, it adds: “[God] does not and cannot bless sin: he blesses sinful man, so that he may recognize that he is part of his plan of love and allow himself to be changed by him. He in fact “takes us as we are, but never leaves us as we are.”

It concludes, “for the above-mentioned reasons, the Church does not have, and cannot have, the power to bless unions of persons of the same sex in the sense intended above.”