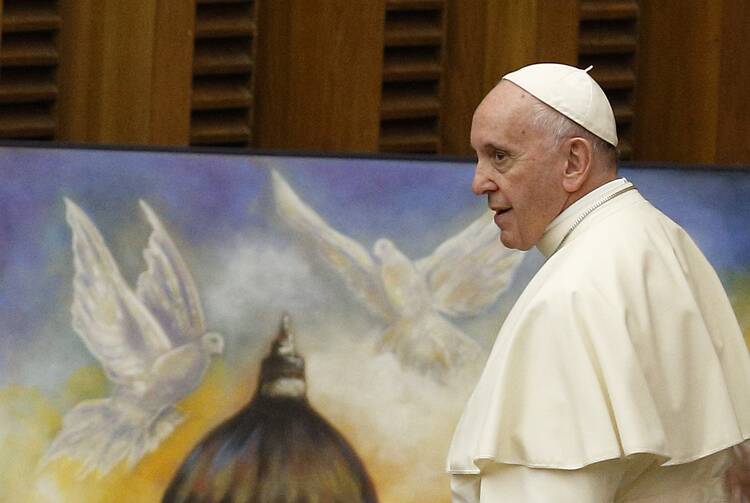 Pope Francis walks past artwork showing the dome of St. Peter's Basilica and two doves during his general audience at the Vatican in this Aug. 8, 2018, file photo. (CNS photo/Paul Haring)

The Holy See’s budget for 2021 is significantly different from those of previous years both because of the financial difficulties related to the Covid-19 pandemic and the new methodology involved in its preparation—a “zero-based budget”—that sought to ensure maximum accountability.

It envisages a deficit of $59 million (U.S. dollars), but the deficit would have been $95 million if the Peter’s Pence donations had not been included as income.

The Spanish-born prefect of the Secretariat for the Economy, Juan Antonio Guerrero, S.J., told Vatican News, in an interview published today that the crisis caused by the pandemic is the reason for this “restrictive budget,” as the income is “far inferior” to that of 2019 (the last “normal” pre-pandemic year for which we have finalized figures). The total income for 2019 was $366 million, whereas for 2021 it is predicted to be $254 million—a decrease of 30 percent.

The Holy See’s budget for 2021 is significantly different from those of previous years both because of the financial difficulties related to the Covid-19 pandemic and the new methodology involved in its preparation.

The income for 2021 came from three sources: “self-generated revenues” (that is from real estate, financial revenues, commercial operations and services); “external donations” (from dioceses and specific donations); “related entities contribution” (that is from the Governatorate of Vatican City States, including museums; and the Institute for the Works of Religion (the Vatican bank); plus the administration and upkeep of St. Peter’s. In addition to these sources, the budget also lists the income from Peter’s Pence (as explained below).

On the other hand, total expenses for 2021 are calculated to be $370 million, which “is the lowest in the recent history of the Holy See, at least since the Secretariat for the Economy was established [in February 2014],” Father Guerrero said. He explained that “it is not possible to reduce [expenditures] in the same manner as revenues while keeping the mission of the Holy See intact.” For this reason, the reduction in expenses from 2019 is only 8 percent despite the much larger drop in revenue. He explained, however, that “if we exclude personnel expenses, which we have not reduced because the protection of jobs and salaries has been a priority, the reduction would be 15 percent.”

He said 50 percent of the 2021 budget goes for expenses related to personnel, which are “very inflexible.” Since many Vatican employees are laypeople with families, he said Pope Francis is “very sensitive to the situation of families” and has insisted that savings should be done without laying off people.

Pope Francis is “very sensitive to the situation of families” and has insisted that savings should be done without laying off people.

The budget chart for the Apostolic Mission in 2021 provides details of the expenses “by concept” and explains that 75 percent of the resources here are destined as follows: the diffusion of the message of the Holy See (22 percent); presence in the world (20 percent); charity (17 percent); support of local churches in difficulties and specific contexts of evangelization (16 percent).

Significantly, for the first time in recent memory, and in the light of the financial uncertainty, the Holy See has produced a “zero-based budget,” which required every office to consider the real need for each item of expenditure—rather than producing a budget based on the previous year’s expenditure. Each Vatican office had to prioritize and justify every single item of expenditure in the light of the mission of the Holy See, starting from scratch.

Father Guerrero pointed out that the budgeting process went beyond the stringent measures that were adopted for the 2020 budget. Those measures involved reducing drastically the cost of consultancies; canceling all the events scheduled for 2020 including ad limina visits of bishops as well as the plenary assemblies of the Vatican congregations and councils, congresses and other such events; limiting travel and blocking or postponing where possible works on real estate. At the same time, he said, because of the pandemic, $6 million have been allocated through Caritas Internationalis to help churches in most difficult situations respond to the needs of the people.

Each Vatican office had to prioritize and justify every single item of expenditure in the light of the mission of the Holy See, starting from scratch.

Father Guerrero explained that the Holy See is neither a company aiming to make a profit nor an N.G.O. nor like other states that can adopt fiscal measures during an economic downturn. “The Holy See has an indispensable mission for which it provides a service that inevitably generates costs, which are covered mostly by donations,” he said. “If donations don’t come in, besides saving as much as possible, we can only use reserves.”

Dismissing sentiments of alarm, he said, “The reserves are there for this reason: they can and must be used in times of economic difficulty.” He expected the income from the Holy See’s rented properties and from its economic activities and services, such as the Vatican museums, to recover gradually once the pandemic is over and tourists return.

Father Guerrero emphasized, however, that “we need to be cautious with spending levels and it is very important that we continue to provide clear and transparent information that gives the faithful peace of mind about the use of their donations.”

In another first, the budget information for 2021 shows how the Peter’s Pence donation is used. The income from Peter’s Pence is predicted to be $56 million, of which $20 million is to be distributed “in charity and aid to the church and communities in various places.” The other $36 million goes as contributions to the dicasteries “to sustain the mission of the Holy Father.” He explained that most Vatican offices that carry out their mission “have expenses not income.”

“If we took away Peter’s Pence the deficit would be $56 million more,” he said.

Alluding to past criticism about how Peter’s Pence was used, Father Guerrero said he considers it “inappropriate” to say the donations cover the deficit of the Curia. He said: “The Curia will always have a deficit. Peter’s Pence serves to cover the expenses of the Holy Father's mission, unity in charity, which he exercises through the various dicasteries.”

Father Guerrero furthermore explained that “the Holy See...helps the mission of the Holy Father and is sustained fundamentally thanks to the contribution of the faithful.” He expressed gratitude “for the generosity of the faithful in this very difficult year.”

“In the midst of the difficulties of this time of pandemic,” he continued, “they have continued to collaborate because they believe in the mission of the church and want to support the Holy Father.”