Pope Francis’ visit will assure Iraqis they have not been forgotten 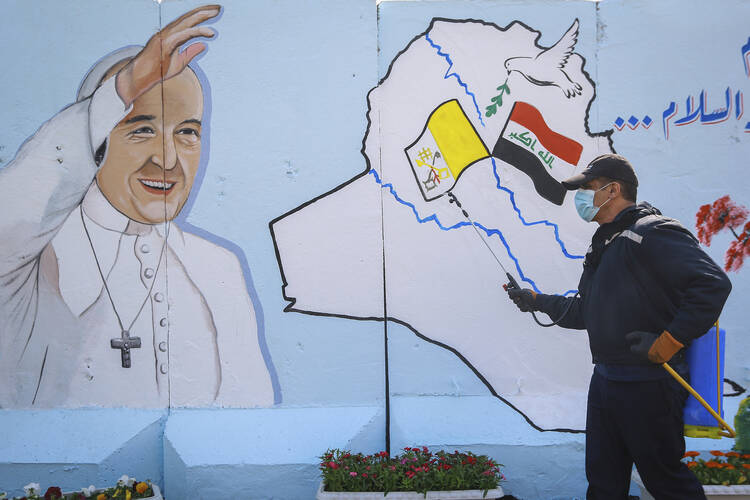 02 March 2021, Iraq, Baghdad: An Iraqi civil defense worker sprays disinfectant in front of a mural depicting Pope Francis in the Syriac Catholic Church of Our Lady of Salvation in Karrada district. Pope Francis is scheduled to visit Iraq from 05 to 08 March 2021. Photo by: Ameer Al Mohammedaw/picture-alliance/dpa/AP Images

Beyond any words spoken or joint declarations that might be signed, the visit of Pope Francis to Iraq, particularly to the cities of Najaf and Ur, is an intensely symbolic and significant gesture. Pope Francis, by visiting a Shia majority country, completes his pastoral embrace of the Islamic world, begun two years ago with his trip to Abu Dhabi when he met with Sheikh Ahmed el-Tayeb, the grand imam of al-Azhar. While the “Document on Human Fraternity for World Peace and Living Together,” signed by the pope and the grand imam in February 2019, is applicable to any nation or worldview, the pope’s planned meeting with Grand Ayatollah Ali al-Sistani on his forthcoming trip to Iraq suggests that his pastoral pilgrimage to the House of Islam, which began with the Sunni, is now extended to embrace the Shia family as well.

Ayatollah al-Sistani and Pope Francis are going to encounter in each other two leaders from radically different worldviews and contexts but with the same desire for an end to sectarian hostility and violence. They are men of deep faith and spirituality, and both have invested significant energy waging peace and chipping away at hostility and injustice. Equally symbolic is the fact that Francis will meet al-Sistani in the holy city of Najaf, the place where Imam Ali—around whose life and spirituality so much of the history and theology of the Shia revolve—lies buried. In this sense, the pope is not simply journeying in pilgrimage to the Shiite people but embracing its heart and soul.

Ayatollah al-Sistani is an extraordinarily important figure in the Shiite Islamic world, head of the Najaf religious seminary (hawza). Numerous Islamic scholars, spread throughout the world, fall under his authority. The other important school is Qum in Iran. Despite disagreements, Ayatollah al-Sistani has never genuinely promoted rivalry between the two great Shiite centers. The meeting, therefore, between Pope Francis and Ayatollah al-Sistani is expected to be largely welcomed by Shiite Muslims the world over.

Pope Francis, by visiting a Shia majority country, completes his pastoral embrace of the Islamic world, begun two years ago with his trip to Abu Dhabi when he met with Sheikh Ahmed el-Tayeb.

Like Pope Francis, Ayatollah al-Sistani is an extremely attractive figure; his popularity across the Shiite world underscores the fact that many people have responded to his theological and political outlook. Iranian-born al-Sistani first studied in Qum before moving to Najaf and so straddles both important theological traditions. Ayatollah al-Sistani, since 2009, has placed in the top 10 of “The Muslim 500: The World’s Most Influential Muslims.” He was a nominee for the Nobel Peace Prize in 2014 and was listed as one of the world’s top 100 intellectuals in 2005.

al-Sistani has also played an increasingly prominent role as peacemaker and treaty-broker in the regional religious and political affairs of post-invasion Iraq. Urging clerics and religious leaders to engage with justice and politics in order to better guide the Iraqi people, he called for a democratic vote for the purpose of forming a transitional government, encouraging the populace—including women, whose participation he urged in special fatwa—to participate in the crucial January 2005 elections. He also pleaded with Iraqi Shiites that they not respond in kind to attacks from Sunni Salafi radicals, urging calm after various bomb attacks and reminding Iraqi Shiites that the culprits were not their Sunni neighbors, but extremists. Ayatollah al-Sistani also appealed to the Iraqi people that they should support the Iraqi government against ISIS.

al-Sistani has also played an increasingly prominent role as peacemaker and treaty-broker in the regional religious and political affairs of post-invasion Iraq.

No less emblematic for all the great families of monotheistic faith will be the pope’s visit to Ur, to discover afresh the origins of Abraham. Abraham’s own life is illustrative of this papal visit to Iraq. In Abraham’s story, there is a constant moving forward at the prompting of God, a letting go of the gods of his forefathers, breaking out from the ties of destiny by trusting in a God who directs people to journey to an unknown territory in much the same way as the pope will do when he visits Iraq for the first time.

The papal visit is in a markedly different context to the early history of Catholic-Shia relations. The first links between the two were tenuous and polemical. A number of religious orders—Jesuits, Carmelites, Augustinians—sent missionaries into Persia during the Ṣafavid Dynasty (16th to 18th centuries). While there were periods of intense proselytism and diplomatic endeavor, there were equal moments of severe persecution. On at least one occasion, a missionary priest converted to Shia Islam and wrote polemical tracts against Christianity, leading to a fraying of relations between two great religious traditions—especially as the Ṣafavid Dynasty began to wane and the missionaries realized that they were making scant progress.

In the last few decades, there has been an increased dialogue between Catholicism and Shia Islam, founded mostly upon the numerous close theological and spiritual bonds between the two. One could name, for example, a common belief in the intercession of the saints; important parallels between al-Husayn (the great martyr of the Shia) and Jesus; and Fatima, the sorrowing, virgin mother of al-Husayn and Mary. Both faith systems also place an enormous emphasis on ritual, some of it quite passionate; as well as an anamnetic memorial of past events, a ritually enacted remembrance—such as is the case in the Catholic celebration of the Eucharist—that makes the past event present or places the worshiper deep within the event.

There has been, certainly since the document “Nostra Aetate” and other Vatican II texts, an ongoing, at times sporadic, dialogue between Islam and Christianity. This dialogue has been and continues to be crucially important, but is, at least in the mind of Pope-emeritus Benedict XVI, not in its truest sense a “theological” dialogue. Besides informing the partner in the dialogue of one’s own beliefs and asking about his or her faith system, any further real theological exchange is quite difficult, and fundamental doctrinal and theological positions are hardly likely to change or be compromised. We have, nonetheless, to keep encouraging frank exchanges between our traditions, especially about the most pressing human issues: freedom of worship, human dignity and nonviolence. All the modern popes, from Paul VI, the first to make a pilgrimage to Muslim lands, to Francis, have clearly envisaged the potential in Islam to be an ally in the defense of major religious values of faith in and obedience to God. Christianity and Islam are really on the same side in their battle to keep God in the public arena.

Pope Francis will be compelled to speak words of consolation and hope to the tiny Christian minority in Iraq, a community that, has suffered for so many years.

As a shepherd, Pope Francis will be compelled to speak words of consolation and hope to the tiny Christian minority in Iraq, a community that, alongside the whole Iraqi people, has suffered for so many years. He will also have to engage directly with the Iraqi government, in a possibly uncomfortable conversation, urging it to adhere to the major principles outlined in the “Document on Human Fraternity for World Peace and Living Together,” calling not merely for tolerance but a meaningful embrace of the other.

This papal journey is a figurative gesture that underscores the need for freedom of worship, equality in rights and a sharing of resources, without forgetting the needs of other minority groups like the Kurds and the Yazidi. The first visit of a pope to Iraq will serve as a necessary catalyst to propel the Iraqi people forward and remind them that they are neither insignificant nor forgotten; they, too, have a role to play on the contemporary world stage. 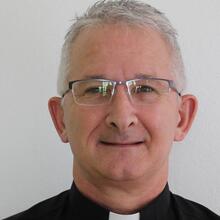 @purplepadre
Show Comments ()
Join the conversation: Login or create an account
Before you can comment, you need to update your profile to include your first and last name, as required in our comments policy. Then reload this page and you'll be set up for commenting. Update your profile