Interview: What to expect when Pope Francis makes his historic trip to Iraq 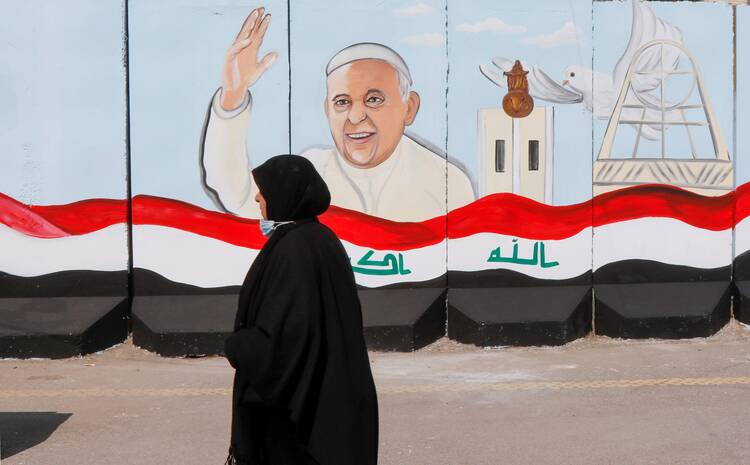 A woman walks past a mural of Pope Francis on a wall surrounding a church in Baghdad Feb. 22, 2021. Pope Francis plans to visit Iraq March 5-8. (CNS photo/Khalid al-Mousily, Reuters)

Notwithstanding significant risks related to security and the pandemic, Pope Francis will visit Iraq from March 5 to March 8. He is going “to console and encourage” the Catholics, Christians and other religious minorities as well as the people of this majority Muslim country that has suffered so much from war, terrorism and persecution. He is going to promote peace and “to offer a concrete road map for the future of interreligious relations and for the future of the world.”

That is what Cardinal Leonardi Sandri, the prefect of the Vatican’s Congregation for the Oriental Churches, told America in an hour-long interview in his office on Feb. 8. The Argentinian-born cardinal visited Iraq in 2012 and 2015 and will accompany Francis on this first-ever visit by a pope to what the cardinal calls “a martyred land.”

“The visit entails risks, and the pope is taking the risks because he sees himself as a pastor, as a father, as one who goes to whoever is in difficulty,” the cardinal said. “As for security, I believe the Iraqi government will take all the measures to ensure the visit is tranquil.” He recognized that members of the Islamic State have begun to regroup under the cover of the pandemic as the Americans withdraw and have carried out suicide attacks in Baghdad.

Pope Francis will visit Iraq from March 5 to March 8. He is going “to console and encourage” the Catholics, Christians and other religious minorities as well as the people of this majority Muslim country.

The pope, Cardinal Sandri said, is more concerned about the pandemic than his own security: “[Francis] says, ‘If I go and many people come to greet me and this causes contagion; I do not want that.’” After this interview was conducted, the Iraqi government imposed a lockdown set to last from Feb. 18 to March 8 to curb the spread of Covid-19. They later changed the end of the lockdown to March 4—the day before the pope will arrive.

He described Francis’ visit as being “in continuity” with the desire of Pope John Paul II, who wanted to visit Ur—the homeland of Abraham, considered the father of faith in one God in Judaism, Christianity and Islam—during the Great Jubilee Year 2000 but was unable to.

The cardinal referred to Iraq as a “martyred land” and spoke of how much it has suffered from “terrorism, violence, bombings and persecution between the different components of Iraqi society.” He recalled that Pope Benedict XVI held a synod of bishops for the Middle East that concluded on Oct. 30, 2010, and the following day, Oct. 31, “a terrible attack was carried out by the Islamic State at the Syro-Catholic cathedral of Baghdad as people were praying, and the explosion left more than 50 dead—priests, laypeople and children.”

The cardinal referred to Iraq as a “martyred land” and spoke of how much it has suffered from “terrorism, violence, bombings and persecution between the different components of Iraqi society.”

“The cause for their beatification has now been opened,” he said, and Pope Francis “will visit this cathedral and pay homage to these martyrs.”

“[Francis] wants to bring consolation, closeness, fraternity, openness, friendship to this people that has suffered so much and to the Catholic Church and the Catholic Christians of this land who have suffered in a way that has left them decimated,” Cardinal Sandri said. He explained that these Christians are divided among different rites: Chaldean, Syro-Catholic, Latin, Armenian and Melchite. There are other Christians, too, who are not Catholic, including the members of the Syrian Orthodox Church of the East, as well as Lutherans and Anglicans.

While recognizing the situation “is difficult,” the cardinal hopes the exodus does not continue and that “the Middle East and Iraq is not left without Christians.”

“Importantly, too,” he said, “Pope Francis wants to say thank you to those bishops for the example they have given by being faithful to their ministry as pastors and not abandoning their flock. They did not go away; they stayed there with their flock and resisted as best they could in the circumstances. They have given an example of the good shepherd to the whole church.”

Cardinal Sandri said the pope often speaks “of the martyrdom of Christians in the present epoch” and that “in some moments it is worse than the persecutions in the early period of Christianity.”

Cardinal Sandri said the pope often speaks “of the martyrdom of Christians in the present epoch” and that “in some moments it is worse than the persecutions in the early period of Christianity.”

He recalled his first visit to Iraq in December 2012, on behalf of Pope Benedict XVI, for the reconsecration of the Syro-Catholic cathedral in Baghdad that was destroyed in the terrorist attack. From there, he traveled to Kirkurk and Erbil in a truck protected by military forces.

On arrival in Kirkurk, he said, “I met Bishop [Louis Raphaël I] Sako [now the Chaldean patriarch], and the first thing he did was to take me to the mosque for a meeting with the Sunni and Shiite imams, where there were welcome speeches, to which I had to respond, and they presented me with a copy of the Qur’an. And then we could go to the cathedral—but first the mosque.”

Commenting on that visit, he said, “For us, it’s another world, accustomed as we are to have the freedom to walk, to come and go. But there it is a world of security.” He recalled that while concelebrating Mass with the patriarch in the cathedral at Kirkurk, “there was a terrible explosion. There was an attack about 12 miles away that left 40 dead.”

On his second visit in 2015, he went to Dujoq, near Mosul, where he visited Christian refugees expelled by ISIS. He could not enter Mosul, which had not yet been liberated from ISIS. During this visit, he saw “the great importance of the generosity of the Catholic world [in providing assistance to these suffering Christians].” He revealed that Pope Francis “will highlight” this generosity by inviting Regina Lynch, the project director of Aid to the Church in Need, to accompany him on the plane.

Cardinal Sandri emphasized that Pope Francis’ visit is not only for Catholics and other Christians; it also has “an important dimension of interreligious dialogue with the Muslims.”

Cardinal Sandri emphasized that Pope Francis’ visit is not only for Catholics and other Christians; it also has “an important dimension of interreligious dialogue with the Muslims.”

He said Francis will not only bring “the call of John Paul II for peace” but also the ideas from his encyclical “Fratelli Tutti” and the declaration on human fraternity that he signed in Abu Dhabi with the Grand Imam of Al-Azhar. In other words, the cardinal said, “he will bring a proclamation for peace and a concrete road map for the future of interreligious relations and for the future of the world.”

The cardinal noted that “we are always thinking of a new world of justice, a new earth, new heavens,” but this requires “the possibility that all people can work together, whatever religion they belong to.” But, he said, “today we have—thanks also to the magisterium of Pope Francis—a greater social consciousness, that’s reflected also in the great personalities of politics and of the world economy, who say we cannot continue this way, with all the injustices and discriminations that we have.”

He believes “the visit of Pope Francis has a constitutional value for the future of the world, a project, a message to which one can grab in order to come out of the abandonment of the present world, with all its inequalities, injustices, poverty, discriminations and so on. It is the road map for the future of humanity.”

Pope Francis will travel to Najaf on March 6 to visit Ayatollah Ali al-Sistani, the most revered authority not only for Iraqi Shiites (some 55 percent of Iraqi Muslims) but also for many other Muslims in this country and worldwide. The cardinal did not know if they will sign a document but, he said, “in any case the document will be the photo of the two of them together, the encounter will be of itself the message.”

Cardinal Sandri believes Francis’ visit to Iraq “has enormous importance because the Middle East is dominated by the presence of Islam in its different forms, Sunni and Shiite and others, too.” It signifies “the pope’s respect for Islam in a country where Muslims have also been victims of this situation. Not only Catholics, Christians but many Muslims, too, have suffered martyrdom by terrorism, the internecine wars, divisions among themselves, and when there’s an attack in Baghdad, the majority [of the victims] are Muslims.” The cardinal senses that “the pope’s respect for this world dominated by Islam...is producing a sentiment of openness to the pope and friendship to the Catholic Church.”

Pope Francis is keen to visit Iraq, and the Iraqi government very much wants him to come. Asked to explain this, the cardinal said: “Iraq needs to overcome a stage in which it is considered to be in a state of death because of all that has happened to it because of wars, terrorism, persecutions, and to be able to say, ‘We are no longer that.’ The visit of the pope brings the connotation that ‘the country is coming out of that state [of death], or has come out of it.’ The visit of the pope is a kind of stamp that says ‘come.’”

The cardinal added, “So let us hope that during the visit this will come true, that they respect the pope and that nothing inconvenient happens from the security point of view.”

Asked what he would consider as signs of a successful visit, Cardinal Sandri said he does not consider cheering crowds as an indicator of success and, in any case, he does not expect to see such in Iraq, no more than we saw them when John Paul II went to Greece. Rather, he views “the fact that the pope bends down in the name of the church and takes on his shoulders, as vicar of Christ, this suffering humanity, and takes this weight, this people, this is moving to a success that is not shown by crowds.”

Moreover, “it is a visit that has already opened doors,” he said, and “it has the possibility of opening even more doors so that the plan of God, who desires that we live as brothers and sisters, may be fulfilled.”