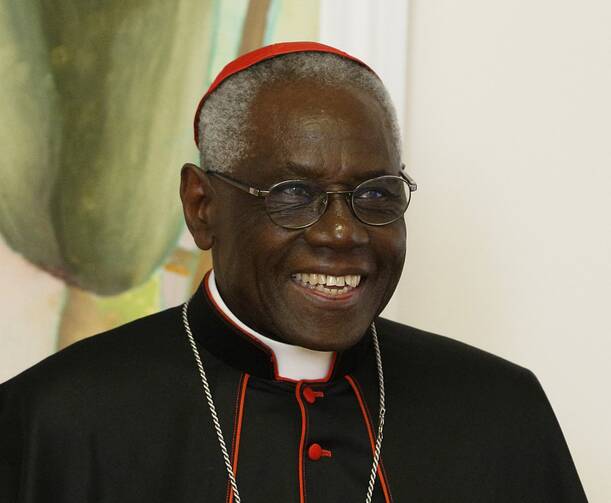 Cardinal Robert Sarah, former head of the Congregation for Divine Worship and the Sacraments, is pictured in a file photo. (CNS photo/Paul Haring)

Pope Francis has accepted the resignation of Cardinal Robert Sarah as prefect of the Congregation for Divine Worship and the Discipline of the Sacraments, but he has not yet named his successor.

The Vatican announced the pope’s decision today, Feb. 20. It came as no surprise in Rome that the pope would replace the cardinal in this key post, which oversees the celebration of the liturgy in the church, soon after Cardinal Sarah had reached the retirement age. But the lack of an immediate replacement is unusual.

A number of the cardinal’s public statements on the liturgy and other topics reflected a pre-Vatican II traditionalist outlook that at times openly contrasted with the direction given by Pope Francis, who is continuing to implement the teachings of the Second Vatican Council. One public example of this is the cardinal’s reluctance for many months to publish the pope’s decree that allowed for washing the feet of women at the Holy Thursday liturgy.

After the Vatican broke the news, Cardinal Sarah issued a tweet in French saying, “Today, the pope has accepted my resignation as prefect of the Congregation for Divine Worship, after my 75th anniversary [of birth]. I remain in the hands of God. The only rock is Christ. We will meet again very soon in Rome and other places.”

The Guinean born cardinal was appointed archbishop of Conakry by Pope John Paul II in 1979 at the age of 34. The same pope named him secretary of the Congregation for the Evangelization of Peoples in 2001 after the archbishop had taken courageous political stances in Guinea against the dictatorship of Sékou Touré and his successor, stances that did not go down well with the country’s ruling class.

Pope Benedict XVI appointed him president of the Pontifical Council Cor Unum and named him cardinal in 2010. Cardinal Sarah participated in the conclave that elected Francis as pope in 2013. Pope Francis appointed him as prefect of the Congregation for Divine Worship and the Discipline of the Sacraments in November 2014. However, it soon became clear that the African prelate shared a very different vision to the pope not only on the liturgy, but also on several other matters including those related to the family, as was evident at the two recent synods of bishops during the discussion on the pastoral approach to the divorced and remarried and to same-sex relationships. The cardinal has in these years exercised enormous influence on his brother bishops in Africa on all these pastoral questions, and this has created problems for Rome.

Cardinal Sarah shared a very different vision to the pope not only on the liturgy, but also on several other matters including those related to the family.

Author of a number of books and a deeply spiritual man, the cardinal’s view on dialogue with Islam also diverged from that of the pope. Moreover, at the time of the synod on the Pan-Amazonian region the cardinal was involved in the controversial publication of a book on the priesthood that included a chapter from Benedict XVI and was presented as a book co-authored with the emeritus pope, something the German emeritus pope later denied.

Among other things, Pope Francis had to correct the cardinal on his advocacy for the celebration of the Eucharist looking to the East (“ad orientem”) and to publicly correct him on the issue of the translation of liturgical texts from the Latin in which, in contrast to the cardinal, the pope gave greater freedom to the local bishops’ conferences in this matter.

In addition to accepting the resignation of Cardinal Sarah, Pope Francis has also accepted the resignation of the Italian cardinal, Angelo Comastri, 77, the vicar general for Vatican City, archpriest of St. Peter’s Basilica and president of the administration of the works (“Fabrica”) of St. Peter’s. He has named as his successor the new cardinal, Mauro Gambetti, 55, an Italian and conventual Franciscan who up to recently was in charge of the Sacred Convent of St. Francis in Assisi, which includes the tomb of the saint. The appointment is a reminder that Francis wants a reform in how the administration of the Fabric of St. Peter is being managed, especially in terms of finance and contracts, as problems have emerged in this area.

Gerard O’Connell
@gerryorome
Provide feedback on this article
Join the conversation: Login or create an account
Before you can comment, you need to update your profile to include your first and last name, as required in our comments policy. Then reload this page and you'll be set up for commenting. Update your profile