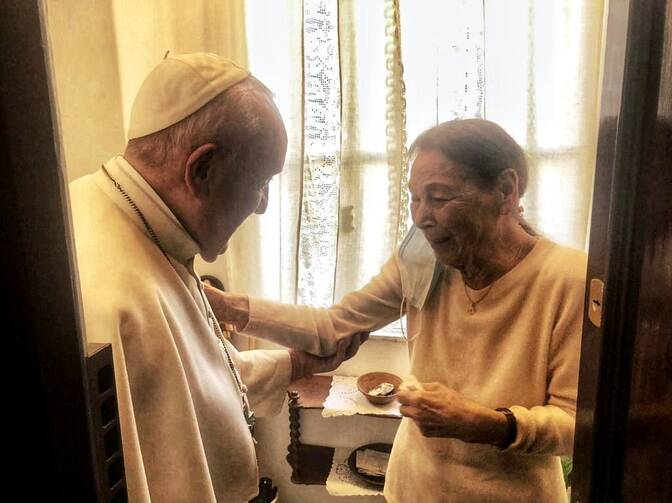 Pope Francis talks with Edith Bruck, a Holocaust survivor and author, during a visit to her home in central Rome Feb. 20. (CNS photo/Vatican Media)

ROME (CNS) -- A month after reading an interview in the Vatican newspaper with Edith Bruck, an author and Holocaust survivor, Pope Francis decided to pay her a visit at her home in the center of Rome.

“I could never have imagined such a thing. When I opened the door, I burst out in tears and we embraced. We were both overcome with emotion,” Bruck told Vatican News after the pope left Feb. 20.

Bruck, 88, was born in Hungary to a poor Jewish family. In April 1944, they and their Jewish neighbors were rounded up and taken to the Nazi ghetto in Budapest and later that year sent to Auschwitz, where her mother died. Then they were sent to Dachau, where her father died, and on to Bergen-Belsen, which was liberated by the Allies in 1945. She moved to Rome in 1954 and has lived there since.

Her latest book, “Il Pane Perduto” (”The Lost Bread”) was published Jan. 20. In connection with the book’s publication and the annual commemoration of Holocaust Remembrance Day, Jan. 27, L’Osservatore Romano, the Vatican newspaper, published a long interview with her, recounting the horrors of the Shoah, but also the tiny points of light -- small gestures of humanity -- she experienced during her ordeal.

Bruck said that during the pope’s visit, which lasted almost two hours, she shared her story with him, including the “five lights” she experienced in the camps, but the pope knew all about them. “He knew my book almost line by line.”

She shared her story with him, including the “five lights” she experienced in the camps, but the pope knew all about them. “He knew my book almost line by line.”

According to the Vatican press office, “The conversation with the pope covered those moments of light sprinkled in the experience of the hell of the concentration camp” and the two spoke of “their fears and hopes for time we are living in, underlining the value of remembrance and the role of elders in cultivating and passing it on.”

“I have come to thank you for your witness and to pay homage to the people martyred by the insanity of Nazism,” the Vatican quoted the pope as telling Bruck. “With sincerity, I repeat the words I pronounced in the heart of Yad Vashem (the Shoah memorial in Jerusalem) and which I repeat before every person like you who suffered so much because of it: ‘Forgive, Lord, in the name of humanity.”

The pope, Bruck said, expressed his sorrow at “the innocents who were annihilated” during the Shoah.

If understanding is impossible, knowing is imperative, because what happened could happen again.

“Systematic cruelty, absolute evil” reigned in the camps, she had said in the January interview.

“‘If understanding is impossible, knowing is imperative, because what happened could happen again.’ I’ve made these words of Primo Levi my own,” she said. “I have never harbored hatred or feelings of revenge, but rather disbelief and infinite sorrow.”

“Evil only generates evil,” she said. “Remembering is painful, but I have never shied away from it. Enlightening a single conscience is worth the effort and pain of keeping alive the memory of what has been. For me, memory is living, and writing is breathing.”