On Ash Wednesday, remember ashes are a symbol. The goal is transformation. 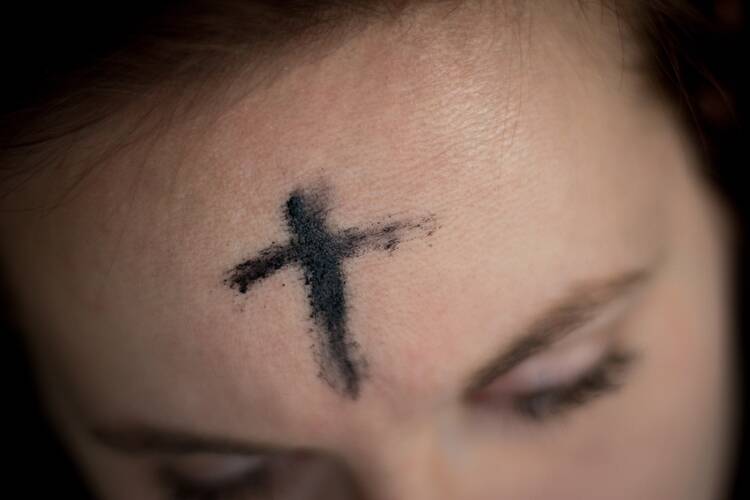 Journey with America’s editors as they reflect on Scripture, prayer, fasting and almsgiving both in written form and on “The Word” podcast.

Jesus said to his disciples:
“Take care not to perform righteous deeds
in order that people may see them;
otherwise, you will have no recompense from your heavenly Father.
When you give alms,
do not blow a trumpet before you,
as the hypocrites do in the synagogues and in the streets
to win the praise of others.
Amen, I say to you,
they have received their reward.
But when you give alms,
do not let your left hand know what your right is doing,
so that your almsgiving may be secret.
And your Father who sees in secret will repay you.

“When you pray,
do not be like the hypocrites,
who love to stand and pray in the synagogues and on street corners
so that others may see them.
Amen, I say to you,
they have received their reward.
But when you pray, go to your inner room,
close the door, and pray to your Father in secret.
And your Father who sees in secret will repay you.

“When you fast,
do not look gloomy like the hypocrites.
They neglect their appearance,
so that they may appear to others to be fasting.
Amen, I say to you, they have received their reward.
But when you fast,
anoint your head and wash your face,
so that you may not appear to be fasting,
except to your Father who is hidden.
And your Father who sees what is hidden will repay you.”

It always amazes me that the Gospel reading for today talks about washing your face and making sure that we don’t let others know that we are fasting. And, traditionally, what do we do on Ash Wednesday? We go to church and have a priest trace the Sign of the Cross on our foreheads, in dark black ash, which is the opposite of washing our faces. Then we leave the church, where not only “others” but everyone can tell we are marking Lent and, as people will rightly presume, are also fasting.

Now at this point you probably expect me to say, “Well, we’re not being hypocritical at all.” But in truth if we’re not careful there can be some showiness involved in Lent. Who went early in the morning to get their ashes? Whose ashes are bigger? Who has the harder fast? Happily, for most people Lent is far deeper than those outward signs, as important as they are.

One of my favorite words in the Gospels is one used by both John the Baptist and Jesus. They both talk about “metanoia,” a Greek word that means a change not only of mind but of heart. Sometimes it’s translated as “repentance.” And that’s accurate, but in English that means mainly being sorry for your sins. Metanoia is deeper. It’s a wholesale turning around, a re-orientation of everything. And you can do that whether or not your face is clear or dirty, and no matter how big or small your ashes are.