You’ve heard of Pascal’s Wager. This Lent, get to know Pascal’s God. 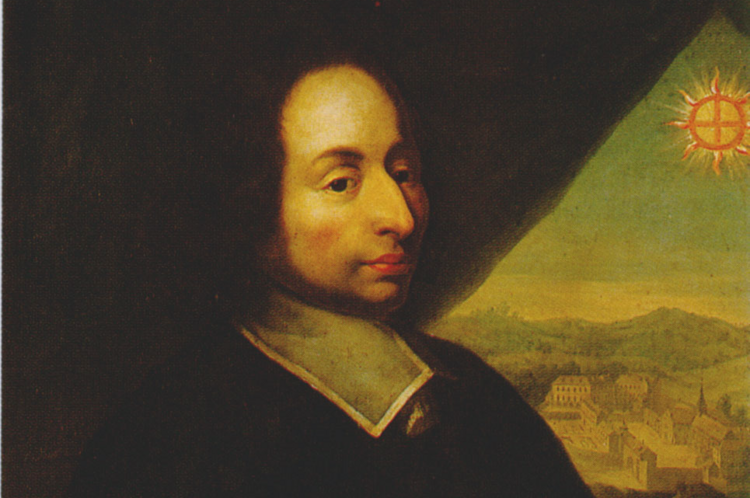 A Reflection for the First Sunday of Lent

Most everyone has heard of Pascal’s wager: It is better to bet on the existence of God—what have you got to lose?—than to wager against God and be damned. If that approach has lost some of its force, it is due to a relatively novel presumption. We still assume God exists, but we have also come to presume that God does not damn souls.

Yet there is a better reason to make the acquaintance of Blaise Pascal, the 17th-century French mathematician, physicist, inventor, philosopher, writer and Catholic theologian. That is his personal experience of faith. After Pascal’s death, a small note, written in his own hand, was discovered, sewn into the lining of his coat. It was a personal memento. Something had happened to the genius, something that changed everything. Pascal felt compelled to record the moment when the God about whom one might speculate became his God, his living God. Though written to himself, Pascal’s note explains itself. It may be the best imprint of a mystical experience ever recorded in words.

The year of grace 1654
Monday, November 23, day of Saint Clement, pope and martyr,
and others in the martyrology.
Vigil of Saint Chrysogonus, martyr, and others.
From about ten-thirty in the evening to about half an hour after midnight.
Fire.
God of Abraham, God of Isaac, God of Jacob, not of the philosophers and savants.
Certitude, certitude; feeling, joy, peace.
God of Jesus Christ. Deum meum et Deum vestrum.
“Thy God shall be my God.”
Forgetting the world and everything, except God.
He is only found by the paths taught in the Gospel.
Grandeur of the human soul.
“Just Father, the world has not known you, but I have known you.”
Joy, joy, joy, tears of joy.
I separated myself from him: Dereliquerunt me lantern aquae vivae.
“My God, will you abandon me?”
May I not be eternally separated from him.
“This is eternal life, that they know you, the only true God, and him whom you have sent, Jesus Christ.”
Jesus Christ.
Jesus Christ.
I separated myself from him; I fled him, renounced him, crucified him.
May I never be separated from him!
He is only kept by the paths taught in the Gospel.
Total and sweet renunciation.
Total submission to Jesus Christ and to my director.
Eternally in joy for a day of trial on earth.
Non obliviscar sermones tuos. Amen.

If you think that God is a question for science, someone did not teach you enough science or philosophy. The empirical method cannot capture realities that lie beyond the method itself. One good semester of philosophy should suffice to show you that science cannot answer the significant questions about realities such as beauty, truth or love. Certainly not why it is that these things exist.

Science is a way for you to know the world. It is getting better all the time. But there will never be a time when science can explain why there is a world to be known or a “you” who wants to know it. That is the province of philosophy. There is nothing wrong in making God an object of philosophical speculation. But remember, such a God is only a notion, no greater than the human mind itself.

Something happened to Pascal, something that swept away speculation with the gift of overwhelming presence. “Certitude, certitude; feeling, joy, peace.”

Something happened to Pascal, something that swept away speculation with the gift of overwhelming presence. “Certitude, certitude; feeling, joy, peace.”

One meaning of the word faith is our acceptance of propositions without proof, though not without the use of reason. But the more foundational meaning of faith is an undeniable experience of God, one that silences speculation. Like Noah, in an experience of faith, the God we presumed to be somewhere in control of the universe becomes the God who stands before us as savior.

The pattern that St. Mark identifies in his Gospel plays itself out in our own lives. The living Christ once stood before men and women and said:

“This is the time of fulfillment.
The kingdom of God is at hand.
Repent, and believe in the gospel” (1:15).

And still today, the reason that faith cannot be reduced to objects of speculation is because the Holy Spirit still comes before us in a way that we can no more deny than we can deny ourselves. As with Pascal, it is the God of Abraham, God of Isaac, God of Jacob, not of the philosophers and savants, who says directly to me and to you, in deeply personal experiences we can neither deny nor fully deliver to another:

“This is the time of fulfillment.
The kingdom of God is at hand.
Repent, and believe in the gospel.”