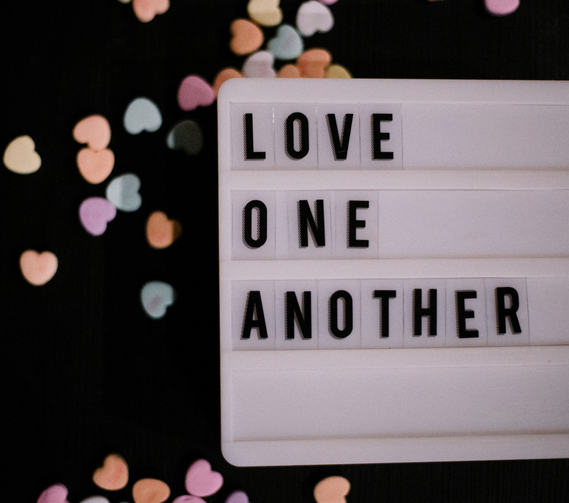 An old saw in the Jesuits (and perhaps other religious orders of women and men, as well as the priesthood) is that the two hardest days of the year are New Year’s Eve and Valentine’s Day.

On New Year’s Eve, when married and other paired-up couples wait to kiss one another at the stroke of midnight, the Jesuit, like many single people, may feel odd. Left out. Fortunately, my mom’s birthday is on New Year’s Eve and my family usually gets together, so there is no lack of hugging and affection.

Valentine’s Day is a bigger challenge. A few days ago on Twitter, after I mentioned that the royalties from my books went to the Jesuits and America Media, someone responded that I had “no money and no honey.” Both true. “No money” has never been a problem for me, but the “no honey” situation is felt particularly strongly on February 14—and in that I’m not alone.

Many if not most single people may struggle with how to celebrate Valentine’s Day, if they choose to do so at all. In the Jesuits we sometimes make light of it, even jokingly wishing one another a “Happy Valentine’s Day, ha ha ha.” Or we focus on the feast itself, which commemorates an early Roman martyr. Fortunately for Jesuits, the next day is a special one, the feast of St. Claude la Colombière, who, appropriately enough for that week, helped to spread devotion to the Sacred Heart. That’s what Valentine’s Day has come to mean for me: a day to celebrate not only romantic love but love more generally.

An old saw in the Jesuits is that the two hardest days of the year are New Year’s Eve and Valentine’s Day.

It is a celebration of the heart, but in specific ways: friendship, companionship, mutual affection, brotherhood and sisterhood, or what Pope Francis calls in his encyclical “Fratelli Tutti” (with less attention to inclusivity) “fraternity.” In fact, “Fratelli Tutti” is concerned with just this kind of love, a “fraternal” (and we can add “sororal”) love that is “open to all.”

“We were created for a fulfilment that can only be found in love,” says Francis in his love letter to love.

Tellingly, when Jesus is told in John’s Gospel that his friend Lazarus is ill, it is the second concept that is used by the evangelist. Martha and Mary send word to Jesus about the illness not of “Lazarus your friend,” “Lazarus our brother” or even “Lazarus your disciple” but hon phileis: he whom you love (11:3). It is a beautiful phrase that vividly communicates the depth of Jesus’s love for his friend.

How did Jesus and Lazarus know one another? What was the basis of their friendship and love? Was it through his sisters Martha and Mary? If so, how did he come to know the two women and rely on them? Novels like Richard Zimler’s marvelous The Gospel According to Lazarus posit that Lazarus and Jesus were childhood friends in Nazareth—and even that Lazarus saved a young Jesus from drowning, thus cementing their tremendously close friendship.

Fictional treatments aside, we know from the Gospels that Jesus often stayed at the house of Martha, Mary and Lazarus in Bethany, just outside of Jerusalem. Just as clearly, we know they were his friends. In fact, in Luke’s Gospel, Martha complains to Jesus about her supposedly lazy sister Mary. Her blunt talk shows not only how honest the two were with another, but also the level of their friendship.

“Do you not care that my sister has left me to do all the work myself?” she says with exasperation to Jesus. “Tell her then to help me!” (10:40)

Who else says “Tell her” to Jesus in the Gospels? No one. The two were clearly good friends who were able to be honest with one another.

Jesus had friends, with whom he shared philos. He also offered his disciples agape, an all-embracing, universal and self-sacrificing love, which reaches its fullest expression on the Cross. Interestingly, when the risen Christ asks Peter “Do you love me?” on the shore of the Sea of Galilee, in John’s Gospel, he toggles between those two words: agape and philos (21:15-19).

We should never denigrate the supreme value of friendship, one of the most important gifts that God offers us.

Some New Testament scholars think that this is simply John’s Gospel varying the words. Others believe that Jesus asks first, “Do you agapas me?” a higher form of love, and finally allows Peter to say, “I phileis you.”

We should never denigrate the supreme value of friendship, one of the most important gifts that God offers us. One of the greatest blessings of my Jesuit life has been my Jesuit brothers. And it’s been a surprise. No one told me when I entered the Jesuit novitiate that this would be the case. They can’t promise you that in the vocational literature, but it’s part of the “hundredfold” in my life.

To that end, I treasure stories from people about friends they have known and loved for decades, sometimes since elementary school or even earlier. The person I call my “oldest friend” (she prefers “longtime”) is a woman named Carol, who grew up across the street from me in the suburbs of Philadelphia. Carol and I both started our lives there. I always say we’ve known each other since we were zero years old. We played together, colored together, skated together, rode our bikes to school together and have followed one another’s lives for 60 years. She is one of the few people who still calls me “Jimmy.”

What it means to be ‘Home for Christmas’ when you’re a Jesuit
Matt Malone, S.J.

And when a friend from one’s youth dies, as a friend of mine did recently, it is as if that part of your life is less present to you. My friend Mark and I had been roommates when we were a few years out of college, and we remained close until the present day. When he died suddenly at age 57 last month, I was stunned by the depth of my sadness. It was a reminder of how much I valued his friendship, how much I valued someone I could call hon phileis.

Valentine’s Day, then, need not be a lonely or even sad one for celibates, as long as we have even one friend—and, of course, family members—who love us. So join me and my fellow Jesuits in a hearty wish for a Happy Valentine’s Day!