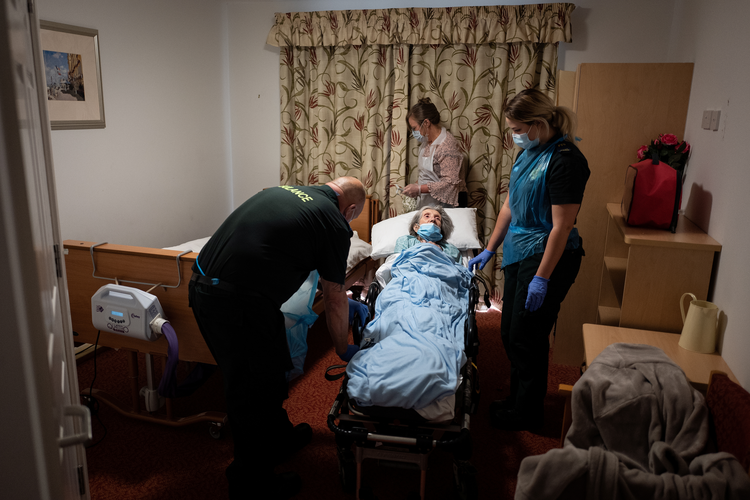 Health care workers help to settle a patient into a home for the elderly in early May near Portsmouth, England, after moving her from the hospital during the COVID-19 pandemic. (CNS photo/Leon Neal, pool via Reuters)

ROME (AP) — The Vatican is calling for a new paradigm of care for older people after what it calls the "massacre" wrought by the coronavirus pandemic, which has disproportionately killed people living in nursing homes.

The Vatican's Pontifical Council of Life issued a position paper Tuesday that made the case for a global rethink of how to care for people in their final years, including resisting any rush to institutional care in favor of adapting home environments to the needs of people as they age.

The council's president, Archbishop Vincenzo Paglia, noted at a press conference that more than half of Italy's elderly dead during the initial coronavirus outbreak lived in nursing homes.

"The death tolls are brutal in their cruelty," Paglia said. "A real massacre of the elderly."

Pope Francis recently designated the fourth Sunday of July as the World Day for Grandparents and the Elderly.

Pope Francis has frequently spoken about the wisdom and richness that older people provide younger generations and denounced how they are often shut away in institutions. That tendency, he says, is part of what he calls today's "throwaway culture" that treats older people, weak and infirm as nonessential.

The 84-year-old Francis, who credits his grandmother Rosa with helping raise him and passing onto him her Catholic faith, recently designated the fourth Sunday of July as the World Day for Grandparents and the Elderly.

Covid-19 has exposed serious problems with how we train doctors to value the elderly — and all human life
Kristin M. Collier

In the paper, the pontifical academy noted that medical advances and demographic changes are making the world as a whole older, citing U.N. data that by 2050, one person in every five will be over age 60.

At the same time, families are having fewer children who can tend to parents as they age, creating the need for a new way of thinking about how to care for older people while valuing the benefits they bring, even in their eventual sickness and frailties.

"It is therefore very appropriate to begin immediately a careful, far-sighted, and honest reflection about how contemporary society should grow close to the elderly population, especially the weakest," the paper said.

"It is therefore very appropriate to begin immediately a careful, far-sighted, and honest reflection about how contemporary society should grow close to the elderly population, especially the weakest,"

"What we need is a new vision, a new paradigm that helps society as a whole to care for the elderly."

The document praised new models of assisted living that provide companionship and care where needed but, in preserving autonomy and independence, fall short of an institutional facility. And it called for greater assistance to families who are able to care for their loved ones at home for as long as possible.

Etsuo Akiba, a professor at the University of Toyama, Japan, and a member of the pontifical council, told reporters via videolink that in Japan, the impact of COVID-19 on older people has been covered-up by the media, leaving families to suffer and mourn in silence.

She blamed this "indifference" on a general shift toward a more individualistic culture in Japan.