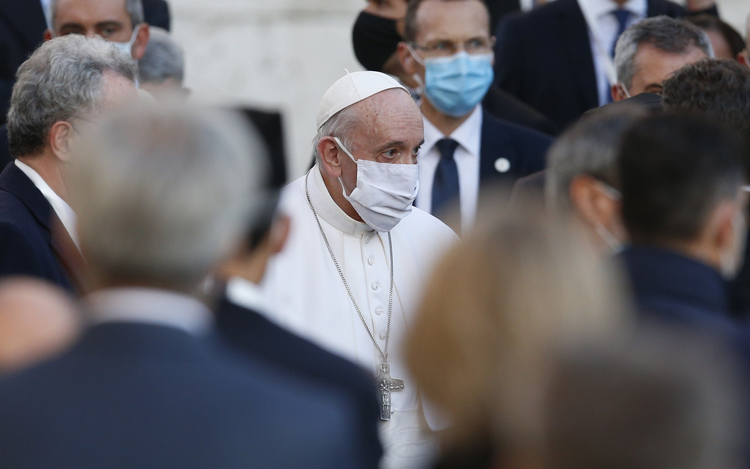 At the beginning of each new year, the pope has an audience with the Vatican ambassadors from the states that have diplomatic relations with the Holy See. It is an important occasion as it provides him with an opportunity to address issues of major importance in the world and to convey his main concerns to governments at the local and global levels.

The audience is usually held at the beginning of the year, but because of a recurrence of sciatica, Pope Francis had to postpone it until Feb. 8. The ambassadors, all wearing masks, came from most of the 183 states that have diplomatic relations with the Holy See. The United States was represented by Patrick Connell, the charges d’affaires, since President Joseph R. Biden Jr. has not yet appointed a new ambassador.

Only a few states, including China and Saudi Arabia, were not represented because they have not established diplomatic relations with the Holy See.

The pandemic began over a year ago and, he recalled, it has not only impacted significantly “the style of life to which we are accustomed, and on the conveniences and certainties we take for granted”; it has also “led to a crisis, for it showed us the face of a world that is seriously ill, not only as a result of the virus but also in its natural environment, its economic and political processes, and even more in its human relationships.”

Throughout 2020, and in particular on March 27 from on a rainswept and empty St. Peter’s Square, Pope Francis addressed the pandemic and the accompanying crises, and, as the death toll rose (now 2.3 million), he always sought to give people hope and open new horizons. He did likewise in his talk to the ambassadors.

He mentioned seven such crises linked to the pandemic: a health crisis, an environmental crisis, an economic and social crisis, a crisis of politics and what he termed “perhaps the most serious of all: the crisis of human relationships.” He not only elaborated on each one; he also drew attention to “the opportunities” these crises “offer for the building of a more human, just, supportive and peaceful world.”

Pope Francis has set up a team in the Vatican to identify actions that governments and the international community can take in 2021 if they wish “to set out on a new path.” In his talk, he highlighted specific steps governments can take in this direction.

Regarding the health crisis, he said, “it is indispensable that political and government leaders work above all to ensure universal access to basic health care, the creation of local medical clinics and health care structures that meet people’s actual needs.” He called on “all states to contribute actively to the international efforts being made to ensure an equitable distribution of the vaccines.”

To address the environmental crisis, Francis emphasized the pressing need for “international cooperation.” He hoped this would prevail at the U.N. Climate Change Conference (COP26) in Glasgow this November. Though he did not mention it in his talk, sources told America the Holy See has welcomed President Biden’s decision for the United States to rejoin the Paris Agreement on climate change.

A Habsburg with a Twitter account: an interview with Hungary’s ambassador to the Vatican
Sean Salai, S.J.

Referring to the economic and social crises caused or aggravated by the pandemic, Francis said the pandemic has given “an opportunity to rethink the relationship between individuals and the economy.” He advocated a “Copernican revolution” that can put the economy at the service of men and women and not vice versa. He appealed to governments to give particular attention to the gig economy and to the plight of migrants and refugees. He urged them to relax sanctions on various countries—he did not name any, but some possibilities include Venezuela, Cuba and Yemen—and expressed the Holy See’s objection to sanctions.

Francis has already initiated a global effort to change the world’s economy. It is called “The economy of Francesco” and brings together young economists, entrepreneurs and change-makers to rethink and give a new soul to the global economy.

In a key part of his talk, Pope Francis drew attention to “the crisis of politics” in today’s world. This crisis, he said, “lies at the root” of the other crises. He said one of its “hallmarks” is “the increase in political conflicts and the difficulty, if not actually the inability, to seek common and shared solutions to the problems afflicting our world.”

In a key part of his talk, Pope Francis drew attention to “the crisis of politics” in today’s world. This crisis, he said, “lies at the root” of the other crises.

He identified this as “a growing trend” in the East and West, including “countries with a long tradition of democracy,” words that appeared to refer to the United States and certain European countries. He denounced the overthrow of democracy in Myanmar. In response to this political crisis, Francis emphasized the need for “vitalizing democracies” and said this is “an inescapable challenge in the present historic moment, one that directly affects all states.”

To help overcome the crisis in politics, Francis advocated for “the development of a democratic consciousness” and emphasized that “democracy is based on mutual respect, on the possibility that each person can contribute to the good of society and on the consideration that different opinions do not threaten the power and security of states, but through honest debate mutually enrich them and enable them to find more suitable solutions to pressing problems.”

He pointed out, too, that the crisis in politics has hurt the multilateral system and approach to global problems, a reference to the problems experienced at the United Nations and elsewhere. He emphasized, however, that the pandemic “is a precious opportunity to devise and implement structural reforms so that international organizations can rediscover their essential vocation to serve humanity by protecting individual lives and peace.”

Francis drew the ambassadors’ attention to what he described as perhaps “the most serious of all [crises]: the crisis of human relations,” which has come into sharper focus during the pandemic.

As he concluded his talk, Francis drew the ambassadors’ attention to what he described as perhaps “the most serious of all [crises]: the crisis of human relations,” which has come into sharper focus during the pandemic. He highlighted the dramatic plight of children and adolescents who are unable to attend school or university regularly. Despite attempts to provide online educational programs, large numbers of young people, the pope said, “have fallen behind” while the increase in distance learning has led to their greater dependence on the Internet and made them more vulnerable to online criminal activities.

He told the ambassadors and the governments they represent that we are witnessing a sort of “educational catastrophe” and appealed to them to respond with “a renewed commitment to an education that engages society at every level.”

Pope Francis concluded his forceful address by telling the ambassadors and the governments they represent:

The year 2021 is a time that must not be wasted. And it will not be wasted if we can work together with generosity and commitment. In this regard, I am convinced that fraternity is the true cure for the pandemic and the many evils that have affected us. Along with vaccines, fraternity and hope are, as it were, the medicine we need in today’s world.