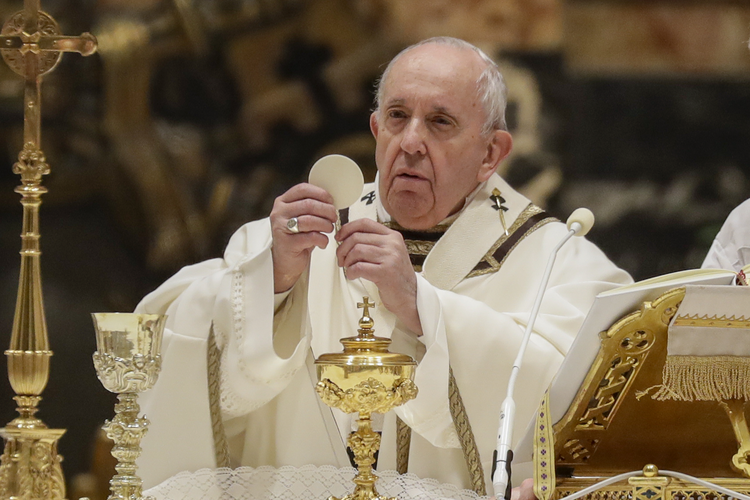 Pope Francis celebrates a Mass with members of religious institutions on the occasion of the celebration of the World Day of Consecrated Life, in St. Peter's Basilica at the Vatican, Tuesday, Feb. 2, 2021. (AP Photo/Andrew Medichini, pool)

ROME (AP) — Pope Francis will meet with Iraq's top Shiite Muslim cleric, Ali al-Sistani, during a trip next month that will also include a pilgrimage to ancient Christian communities that were emptied and devastated in battles with the Islamic State group.

The Vatican on Monday released the itinerary of Francis’ March 5-8 visit to Iraq, his first foreign trip since being grounded for 16 months due to the coronavirus pandemic. The 84-year-old pontiff, who has been vaccinated against COVID-19, apparently intends to go ahead with the trip despite the pandemic and lingering security concerns.

Francis’ main reason for making the first-ever papal trip to Iraq is to encourage the country’s Christians, who faced decades of discrimination by Iraq’s Muslims before being persecuted by the Islamic State group starting in 2014. Francis had intended to visit Iraq that year, as did St. John Paul II in 2000, but both had to call off their trips due to security concerns.

On his first day in Baghdad, Francis will meet with Catholic priests and nuns in the Our Lady of Salvation Church, the site of a 2010 massacre that killed 58 people and was claimed by the al-Qaida in Iraq group, which later splintered into IS.

The next day, Francis travels to Najaf, home of al-Sistani, one of the world’s leading Shiite leaders. He will also host an interfaith meeting that day in the ancient city of Ur, the birthplace of Abraham, the prophet who is common to Muslim, Christians and Jews.

Francis’ main reason for making the first-ever papal trip to Iraq is to encourage the country’s Christians, who faced decades of discrimination by Iraq’s Muslims before being persecuted by the Islamic State group starting in 2014.

Francis has spent years trying to improve Christian relations with Muslims, and his meeting with al-Sistani will mark one of his most important encounters with a Shiite leader. Francis has already forged close ties with the prominent Sunni leader, Sheikh Ahmed el-Tayeb, the grand imam of Al-Azhar, the seat of Sunni learning in Cairo.

Francis’ last full day in Iraq will take him to the northern Kurdish region, from where he will visit Mosul and Qaraqosh in the Nineveh Plains, the largest Christian town in Iraq where the population fled when IS arrived in 2014.

The slow return of displaced Christians to northern Iraq since the territory was liberated from the Islamic State in 2017 remains a contentious issue. Few Christian families have returned but the Vatican has been encouraging those who fled to come back and ensure a continued Christian presence in the area that dates from the time of Christ.

Many Christian families remain displaced in the Kurdish region, saying their homes in Mosul are still destroyed and inhabitable. Others fear the presence of militias stationed in and around the Ninevah Plains. Qaraqosh, a majority Christian village, has come to symbolize the plight of Iraq’s Christians since liberation battles were fought and won.

IS maintains a presence across northern Iraq and is able to execute operations through active sleeper cells that target Iraqi security forces. Attacks in Ninevah have abated in the last year, but the group is active in nearby provinces of Kirkuk and Diyala.

Francis will also host a prayer “for the victims of the war” at a church square in Mosul. Many of Mosul’s churches were destroyed by IS fighters and airstrikes during the war. Rebuilding them has lagged for years.

Samya Kullab, Associated Press
Show Comments ()
Join the conversation: Login or create an account
Before you can comment, you need to update your profile to include your first and last name, as required in our comments policy. Then reload this page and you'll be set up for commenting. Update your profile