To understand Pope Francis, you have to know what he actually means by the word ‘fraternity’ 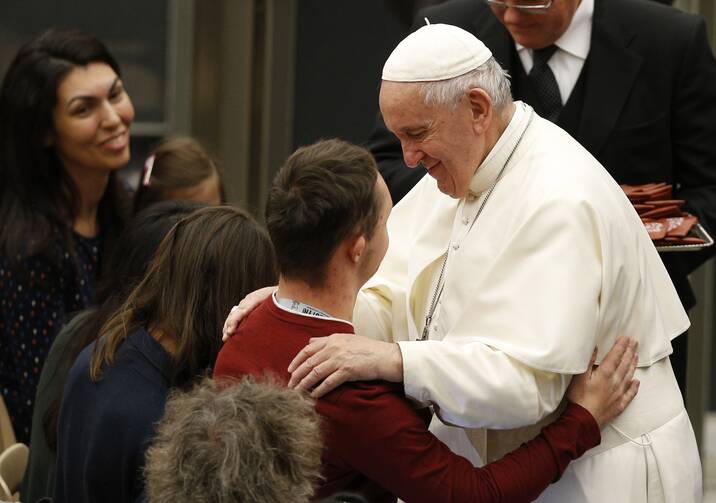 Pope Francis embraces a man as he meets the disabled during his general audience in Paul VI hall at the Vatican Dec. 11, 2019. (CNS photo/Paul Haring)

When Pope Francis uses the word fraternity, the touchstone in his latest social encyclical “Fratelli Tutti,” he means it in the fullest sense of the word. We would certainly be mistaken to understand references to fraternity simply for their rhetorical effect or merely as a bid to evoke a romanticized worldview that is impossible to achieve.

It is ironic how in such a hyper-connected world as ours, anything that has to do with kinship, including fraternity, is trivialized. Recreational ancestry-testing kits, for example, have contributed to redefining what is understood by kin and who belongs to it. Families in the Western world are becoming more fragmented and increasingly individualistic. Advances in reproductive technologies, where any given child can have up to five different parents (two gametes from donors, a surrogate mother and the couple that raise the child) have further complicated our understanding of kin.

Pope Francis attempts to restore the full meaning of fraternity and social friendship through “Fratelli Tutti.”

Around the globe, political parties and pressure groups on the extreme ends of the ideological spectrum sometimes adopt the term brotherhood or its equivalents to strengthen the bond among them and to distinguish themselves from others. All this has led to the concepts of “fraternal” and “stranger” to become increasingly blurred, or alternatively, used to cut oneself off to join a closed and elitist group.

Moreover, throughout “Fratelli Tutti,” Pope Francis uses fraternity and social friendship interchangeably (No. 142). But even the word “friendship” has acquired a significant degree of volatility with its use in social media, becoming something that can be done or undone with a tap on a screen.

If Benedict XVI had famously pointed out that love is one of the most “most frequently used and misused of words,” the corrective for which he attempts to provide in his 2005 encyclical “Deus Caritas Est,” Francis similarly attempts to restore the full meaning of fraternity and social friendship through “Fratelli Tutti.”

The theme of kinship has never really been neglected in Catholic theology. Pope Benedict XVI, then Joseph Ratzinger, was responsible for producing an important work on the subject, which was first presented at a congress in Vienna in 1958 and eventually published as a book titled The Meaning of Christian Brotherhood.

In his deeply influential work, Ratzinger tries to decipher the various meanings of brotherhood in a Christian sense. Although he makes a few fleeting references to the fraternal relationship between Jesus and the “little ones,” by which he means the marginalized in society, he does not dwell at length on this idea. Rather, the main thrust of his argument is that brotherhood with Christ, and therefore with each other, is restricted to the inner circle of Christians who share in the Eucharistic bread.

Globalization has largely failed to live up to its promise of turning the world into a global village.

This does not mean that Christians are exempt from showing mercy toward others. On the contrary, Ratzinger insists that this inner circle of brothers in Christ is at the service of the rest of humanity in three important ways: first through missionary activity of preaching the good news to them; second by practicing agape-love with them; and third by suffering “for them in their place as the Master did.”

What Ratzinger is keen on avoiding is the idea that everyone is brother and sister; this, he insists, would defeat the whole purpose of brotherhood and sisterhood, which by definition demarcates clear boundaries between one’s own and others. His point is well taken.

The meaning that Francis retrieves in fraternity is, however, of a different order. While Ratzinger’s is of a “given” kind, whereby one becomes a brother by virtue of being born in a particular faith and participating in the sacraments, Francis’ understanding of fraternity is of a more practical nature. Although in one aspect fraternity is a “given” due to our common human nature irrespective of country of origin or religion (“Fratelli Tutti,” No. 1), it is also something that is actively wrought as we forge our relationships with others.

The hint is found in the extended reflection on the Good Samaritan that runs throughout the second chapter of “Fratelli Tutti.” The crux of that well-known parable is that Jesus turns the scribe’s question on its head. Jesus does not answer the question “Who is my neighbor?” but instead invites the scribe to become a neighbor to the person in need (No. 62).

Some might be surprised to learn that Venerable Fulton J. Sheen, the U.S. bishop known for his televised preaching in the last century, had published a book in 1938 titled Liberty, Equality and Fraternity. In this work, born out of his doctoral dissertation which he completed at the Catholic University of Louvain in Belgium, Sheen offers fraternity as the practical alternative to liberty and equality.

By understanding ourselves as brothers and sisters we are impelled to practice mercy toward each other, and to build structures that do just this.

Already, then, Sheen was attempting to respond to the individualism that came with economic liberalism on the Western side of the globe, and the “revolution and blood shed” under totalitarian regimes in the East. He framed fraternity as the “Catholic solution which aims at reconstructing society on the basis of mutual cooperation, joint effort, harmonious organization, justice, charity and a love for the common good.”

Similar situations are currently being experienced under different guises across the globe. Globalization has largely failed to live up to its promise of turning the world into a global village. Instead, it has reduced the world to a kingdom of monads viciously competing with each other over limited resources at the peril of the environment for subsequent generations.

The discourse on equality is often simply superimposed on this tragic state of affairs, with the result that it becomes little more than window dressing, the silencing of voices and the offering of tributes at the altar of relativism (Nos. 100, 103-105, 206, 209).

Fraternity, therefore, ceases to be a personal and private trait lived only in the intimacy of the family where “blood is thicker than water.” Rather, it overflows into the political sphere, acquiring an important public dimension, charging each and every one of us with political responsibility that is not restricted to those in the higher echelons of power.

In particular, I highlight Pope Francis’ call for structures and movements that he refers to as “social poets” because, through concrete experiences of solidarity at grassroots level, they “work, propose, promote and liberate” (No. 169).

To my mind, these “social poets” recall the confraternities that were active throughout most of medieval Europe and that played a significant social, even political, role in favor of the disenfranchised.

Finally, the frequent references to the “Document on Human Fraternity for World Peace and Living Together,” which Pope Francis signed together with the Grand Imam Ahmad Al-Tayyeb in February 2019, is a practical example of how fraternity transcends religious, cultural and boundaries even in tumultuous times.

Pope Francis’ retrieval of the concept of fraternity is timely and challenging, and while functioning within a context of tradition, it is also innovative. By understanding ourselves as brothers and sisters we are impelled to practice mercy toward each other, and to build structures that do just this. Now that we know that we are all kin, we cannot just look the other way. 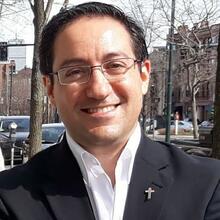 The Rev. Carlo Calleja is a diocesan priest and moral theologian at the Faculty of Theology, University of Malta. He obtained his doctorate in sacred theology from the Boston College School of Theology and Ministry in 2020.