Pope Francis: Christians must encounter the Bible, not just recite verses ‘like parrots’ 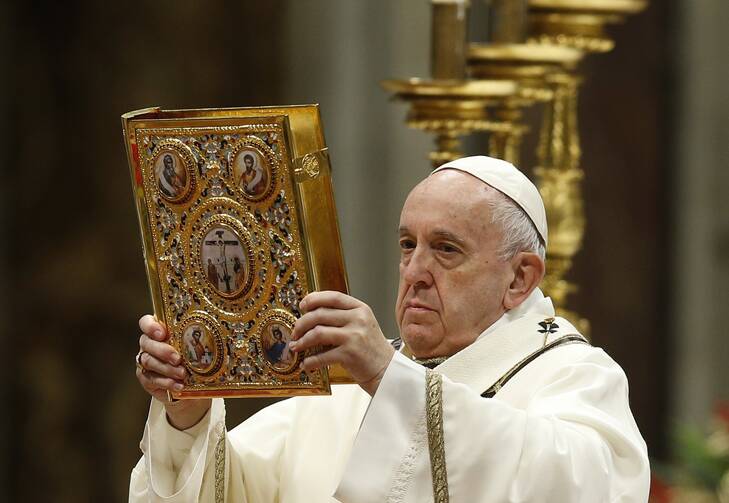 Pope Francis raises the Book of the Gospels as he celebrates Mass marking the feast of the Epiphany in St. Peter's Basilica at the Vatican in this Jan. 6, 2020, file photo. (CNS photo/Paul Haring)

Below is the text of Pope Francis' weekly Wednesday audience, delivered on Jan. 27, 2021.

Today I would like to focus on the prayer we can do beginning with a Bible passage. The words of the Sacred Scripture were not written to remain imprisoned on papyrus, parchment or paper, but to be received by a person who prays, making them blossom in his or her heart. The Word of God goes to the heart. The Catechism affirms that: “prayer should accompany the reading of Sacred Scripture”—the Bible should not be read like a novel, it must be accompanied by prayer—“so that a dialogue takes place between God and man” (no. 2653). This is where prayer leads you, because it is a dialogue with God. That Bible verse was written for me too, centuries and centuries ago, to bring me a word of God. It was written for every one of us. This experience happens to all believers: a passage from the Scripture, heard many times already, unexpectedly speaks to me one day, and enlightens a situation that I am living. But it is necessary that I, that day, be present for that appointment with that Word. That I may be there, listening to the Word. Every day God passes and sows a seed in the soil of our lives. We do not know whether today he will find dry ground, brambles or good soil that will make that seed grow (cf. Mk 4:3-9). That they become for us the living Word of God depends on us, on our prayer, on the open heart with which we approach the Scriptures. God passes, continually, and through the Scripture. And here I return to what I said last week, to what Saint Augustine said: “I am afraid of God when he passes.” Why is he afraid? That he will not listen to him. That I will not realize that he is the Lord.

This is where prayer leads you, because it is a dialogue with God. That Bible verse was written for me too, centuries and centuries ago, to bring me a word of God.

Through prayer a new incarnation of the Word takes place. And we are the “tabernacles” where the words of God want to be welcomed and preserved, so that they may visit the world. This is why we must approach the Bible without ulterior motives, without exploiting it. The believer does not turn to the Holy Scriptures to support his or her own philosophical and moral view, but because he or she hopes for an encounter; the believer knows that those words were written in the Holy Spirit, and that therefore in that same Spirit they must be welcomed and understood, so that the encounter can occur.

The believer does not turn to the Holy Scriptures to support his or her own philosophical and moral view, but because he or she hopes for an encounter.

It irritates me a little when I hear Christians who recite verses from the Bible like parrots. “Oh, yes… Oh, the Lord says… He wants this….” But did you encounter the Lord, with that verse? It is not a question only of memory: It is a question of the memory of the heart, that which opens you to the encounter with the Lord. And that word, that verse, leads you to the encounter with the Lord.

Therefore, we read the Scriptures because they “read us.” And it is a grace to be able to recognize oneself in this passage or that character, in this or that situation. The Bible was not written for a generic humanity, but for us, for me, for you, for men and women in flesh and blood, men and women who have a name and a surname, like me, like you. And the Word of God, infused with the Holy Spirit, when it is received with an open heart, does not leave things as they were before: never. Something changes. And this is the grace and the strength of the Word of God.

It irritates me a little when I hear Christians who recite verses from the Bible like parrots.

The Christian tradition is rich in experiences and reflections on prayer with the Sacred Scripture. In particular, the method of “Lectiodivina” has been established; it originated in monastic circles, but is now also practised by Christians who frequent their parishes. It is first of all a matter of reading the biblical passage attentively. This is Lectio divina, first and foremost reading the Bible passage attentively, or more: I would say with “obedience” to the text, to understand what it means in and of itself. One then enters into dialogue with Scripture, so that those words become a cause for meditation and prayer: while remaining faithful to the text, I begin to ask myself what it “says to me.” This is a delicate step: we must not slip into subjective interpretations, but we must be part of the living way of Tradition, which unites each of us to Sacred Scripture. The last step of Lectio divina is contemplation. Words and thoughts give way here to love, as between lovers who sometimes look at each other in silence. The biblical text remains, but like a mirror, like an icon to be contemplated. And in this way, there is dialogue.

Through prayer, the Word of God comes to abide in us and we abide in it. The Word inspires good intentions and sustains action; it gives us strength and serenity, and even when it challenges us, it gives us peace. On “weird” and confusing days, it guarantees to the heart a core of confidence and of love that protects it from the attacks of the evil one.

The Word of God, infused with the Holy Spirit, when it is received with an open heart, does not leave things as they were before: never.

In this way the Word of God is made flesh—allow me to use this expression—it is made flesh in those who receive it in prayer. The intuition emerges in some ancient texts that Christians identify so completely with the Word that, even if all the Bibles in the world were to be burned, its “mold” would still be saved because of the imprint it has left on the life of the saints. This is a beautiful expression.

Christian life is at the same time a work of obedience and creativity. A good Christian must be obedient, but he or she must be creative. Obedient, because he listens to the Word of God; creative, because she has the Holy Spirit within who drives her to be so, to lead her on. Jesus, at the end of one of his parables, makes this comparison—he says, “Every scribe who has been trained for the kingdom of heaven is like a householder who brings out of his treasure—the heart—what is new and what is old” (Mt 13:52). The Holy Scriptures are an inexhaustible treasure. May the Lord grant to all of us to draw ever more from them, though prayer.

Remembrance also means being careful because these things can happen again, starting with ideological proposals that are intended to save a people and end up destroying a people and humanity.

Today, the anniversary of the liberation of the Nazi Extermination Camp of Auschwitz, we celebrate International Holocaust Remembrance Day. We commemorate the victims of the Holocaust and all those persecuted and deported by the Nazi regime. Remembrance is an expression of humanity. Remembrance is a sign of civilization. To remember is a condition for a better future of peace and fraternity. Remembrance also means being careful because these things can happen again, starting with ideological proposals that are intended to save a people and end up destroying a people and humanity. Be aware of how this road of death, extermination and brutality began.