Who is Father Leo O’Donovan, the Jesuit priest delivering the invocation at Biden’s inauguration? 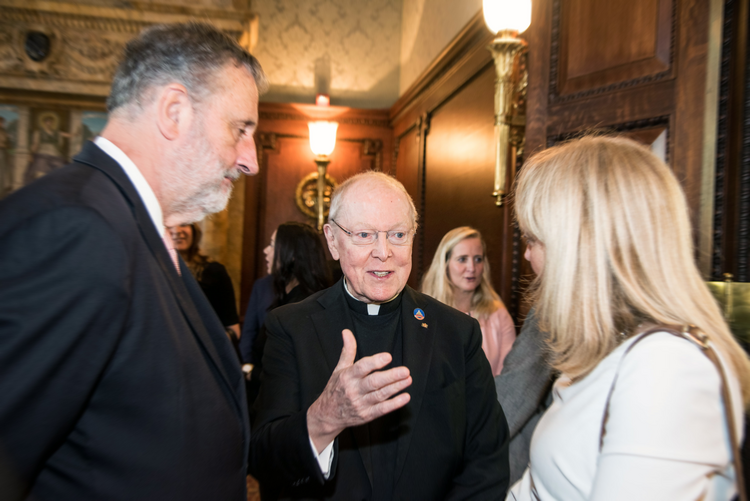 Recently, Leo O’Donovan, S.J., revealed to National Catholic Reporter that President-elect Joseph R. Biden Jr. asked him to deliver the invocation at his inauguration on Jan. 20.

Mr. Biden and Father O’Donovan have a friendship that has lasted several decades. As the president of Georgetown University, Father O’Donovan encouraged Mr. Biden to give a lecture at the school about the importance of faith in his political life, which would be the first time Mr. Biden addressed the topic publicly. This was in 1992, the same year that Mr. Biden’s son, Hunter, finished his undergraduate studies at Georgetown. Mr. Biden noted that he had “never worked so hard on a speech [his] whole life.” Years later, Mr. Biden asked Father O’Donovan to preside over the funeral Mass of his son Beau Biden following his death from brain cancer in 2015.

Mr. Biden wrote the foreword to Father O’Donovan’s 2018 book, Blessed Are the Refugees: Beatitudes of Immigrant Children. In it, Mr. Biden writes that Father O’Donovan has “provided great wisdom and solace to my family and me. And I will be forever grateful for his presence and his kind words at the service for my son Beau.”

In 2015, Father Leo O’Donovan presided over the funeral Mass for Beau Biden following his death from brain cancer. Tomorrow, he will deliver the invocation at Joe Biden’s inauguration.

Upon his appointment in 1989, Father O’Donovan instituted a number of changes to Georgetown’s campus and academic programs, including hiring more women and minorities in faculty roles and refurbishing and constructing new buildings. These changes are widely seen as contributing to Georgetown’s rise in prominence among other national colleges and universities. He served in the role of president until 2001.

Like Mr. Biden, Father O’Donovan has received criticism when it comes to how he sought to balance church teaching with complex social questions.

[Read: The Invocation at the Inauguration of President Joe Biden]

He came under fire for recognizing an abortion rights students group, eventually leading to the threat of a canon law suit from the Vatican, which said the group must be dissolved or Georgetown’s status as a Catholic school might be revoked. In an interview with Georgetown’s school newspaper, The Hoya, Father O’Donovan said, “In a university situation I would always favor enabling a conversation in the company of wise faculty and wise moral and religious guides, rather than forcing that discussion underground.”

In 1996, the then-chief executive officer of Disney Michael Eisner appointed Father O’Donovan to the board of the Walt Disney Co. Mr. Eisner served on the board of Georgetown, where his son was a student at the time.

As the director of mission for the U.S. branch of Jesuit Refugee Service, Father O’Donovan has at times been critical of President Donald J. Trump, particularly on the subject of refugees and immigration.

“This is an opportunity to influence a major American company that has tried to produce entertainment that is sustaining and enriching to family life,” Father O’Donovan said in an interview with The Washington Post at the time of his appointment. “I do think entertainment, as well as education, becomes more humane and more significant when moral dimensions are considered.... I think a company will be more successful if they ask what their social impact is as they pursue their more immediate goals.”

In 2016, he became the director of mission for the U.S. branch of Jesuit Refugee Service. In that role, he has at times been critical of President Donald J. Trump, particularly on the subject of refugees and immigration. In 2018, Father O’Donovan expressed his support for migrants and refugees, writing, “The exclusionary rhetoric of the dangerous, the infected, the likely criminal ‘other’ is not simply a morally unacceptable characterization of ‘those others.’ It is an indictment of ourselves.” Mr. Biden is expected to announce an immigration plan on his first day in office that would create a pathway to citizenship for nearly 11 million people living in the United States illegally.

Father O’Donovan has also been a regular contributor to America for many years, having written for the publication on matters of art, philosophy and politics.

Kevin Christopher Robles is a Joseph A. O'Hare, S.J., postgraduate media fellow at America. He was previously an editorial intern in 2019.