Explainer: The history of women lectors and altar servers—and what Pope Francis has changed 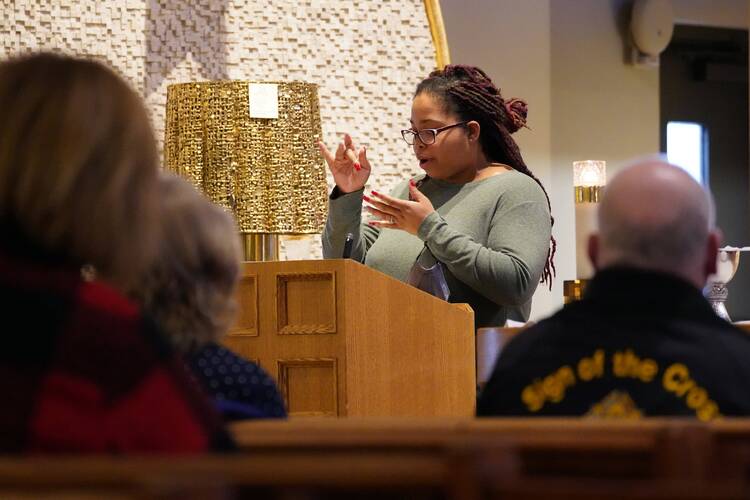 Corinne Griske uses American Sign Language while serving as a lector during a Mass for members of the Catholic Deaf Community of Long Island, N.Y., on the Fourth Sunday of Advent at St. Frances de Chantal Church in Wantagh, N.Y., Dec. 20, 2020. (CNS photo/Gregory A. Shemitz)

Pope Francis today changed church law to allow women to be permanently installed as lectors or acolytes—essentially, readers, distributors of Communion and assistants at Mass and the sacraments.

While women have performed these ministries at Mass for decades, they had until now been barred from being permanently installed in these roles. Such permanent installation, made official in a church ceremony, is extremely rare for lay people.

More commonly, women have been allowed to serve in these roles temporarily at the discretion of the local bishop. Today’s change in canon law prevents bishops from choosing to restrict women from these ministries.

The decree “Spiritus Domini” (“Spirit of the Lord”) changed the wording of Canon 230. The church law previously read, “Lay men who have the age and skills determined by decree by the Episcopal Conference, can be permanently employed, through the established liturgical rite, for the ministries of readers and acolytes; however this conferment does not give them the right to sustenance or remuneration by the Church.”

The law now reads “lay people” rather than “lay men.”

What are lectors and acolytes?

While lectors are generally recognized as the readers at Mass, their ministries can also include directing the congregation’s singing and participation, preparing people for the sacraments and preparing other Mass readers.

The title “acolyte” likewise includes several roles, including serving at the altar at Mass, assisting priests and deacons with other sacraments, distributing Communion, exposing the Blessed Sacrament for adoration and instructing other altar servers.

These ministries were two of the four “minor orders” that date back to the early church. Men would be ordained as lectors and acolytes (as well as exorcists, porters and subdeacons) on their way to diaconal and eventually priestly ordination. According to Phyllis Zagano, a Hofstra University professor and renowned scholar on women deacons, there is no evidence that women were ever ordained to these ministries, though they certainly performed the roles, as they do today.

While women have performed these ministries at Mass for decades, they had until now been barred from being permanently installed in these roles.

Over time, it became common for wealthy and highly educated men to be installed in these roles even if they were not becoming priests, but in 1917 these “minor orders” were limited to seminarians. In 1972, with his motu proprio “Ministeria Quaedam,” Pope Paul VI decreed that lay men could be installed as acolytes and lectors as long as it was clear that these were not steps toward ordination. That remained the practice until 1983, when canon law was updated to say that any lay person could perform the roles but not be installed permanently in them. In 1994, the Vatican’s Congregation for Divine Worship and the Discipline of the Sacraments said that a bishop could allow women and girls to be altar servers, though that role is distinct from that of an acolyte; for example, an acolyte can purify chalices and patens used for Communion, an act that altar servers are not supposed to perform.

What does this mean for altar girls?

Could women hold this role before?

Since 1994, women have been officially permitted to read and serve at Mass at their bishop’s discretion, though in practice they had done so since the 1970s. But women remained barred from permanent institution as lectors or acolytes. Both ministries include a historic connection to preparation for ordination to the all-male priesthood in the Catholic Church.

Following today’s change, it would be more difficult to justify banning girls from becoming altar servers when adult women can be permanent acolytes and serve in the sanctuary during Mass.

In most of the world, women already serve these functions. In large swaths of South America, in particular, where priests are scarce, women are often responsible for catechizing their communities, instructing those preparing to receive the sacraments and distributing Communion when a priest cannot travel to their parish. Because of this, Dr. Zagano sees today’s change in canon law as an affirmation of women who are already doing these jobs. “It has solidified the Holy Father’s interest in opening lay ministries to men and women,” she said.

Pope Francis issued today’s decree “motu proprio” or “of his own accord.” It remains unknown why the pope chose to make the change now, but he wrote in a letter that accompanied the decree that there had been a “doctrinal development” showing that some ministries, like those of lector and acolyte, are rooted in baptism rather than as stepping stones toward the ordained priesthood.

“Offering lay people of both sexes the possibility of accessing the ministry of acolyte and lector, by virtue of their participation in the baptismal priesthood, will increase the recognition, also through a liturgical act [institution], of the precious contribution that many lay people make, including women, to the life and mission of the Church,” the pope wrote.

Pope Francis wrote in his 2020 letter “Querida Amazonia” that he wanted to see the church give more official roles to women. This decision seems to be in line with that priority.

Pope Francis wrote in his 2020 letter “Querida Amazonia” (“Beloved Amazonia”) that he wanted to see the church give more official roles to women. This decision seems to be in line with that priority.

Does this have anything to do with women’s ordination?

It depends on whom you ask. In his letter today, Pope Francis referred to Pope John Paul II’s 1994 declaration that women could never be ordained as priests. Francis wrote, “If, with respect to ordained ministries, the church ‘has no power in any way to confer priestly ordination on women’...it is possible for nonordained ministries, and today it seems appropriate to overcome this reservation.”

In a press release, the Women’s Ordination Conference, a group that advocates for women to be ordained as priests, said that the conference welcomed the pope’s recognition that “some ministries in the Church are founded on the common priesthood of all the baptized. WOC prays that he follows that logic, which is sound theology, to its natural conclusion: that all genders have ‘put on Christ’ through the sacrament of baptism and should not be barred from fulfilling an authentically discerned call to ordination.”

For Dr. Zagano, an advocate of ordaining women to the diaconate, today’s decision is not necessarily a step toward women’s ordination, but it does “affirm legally that women can be near the sacred” by serving roles in the sanctuary.

Because so few bishops worldwide ever permanently install lay people outside the seminary to these roles, it is difficult to say how much will change. It is possible that the new decree will increase interest and awareness of these roles and thus lead to the practice becoming more common, but ultimately bishops will still approve those in their diocese who are permanently installed in these ministries.

The difference now is that bishops who want to exclude women from serving in the sanctuary will not have legal backing. Instead, they would have to prove that women coming forward to join these ministries are not qualified, which would be more difficult.

Update 01/12/2021: This article has been updated to reflect the Ph.D. holder's preferred title on second reference.