In Defense of Altar Girls: Lessons learned while serving at Mass 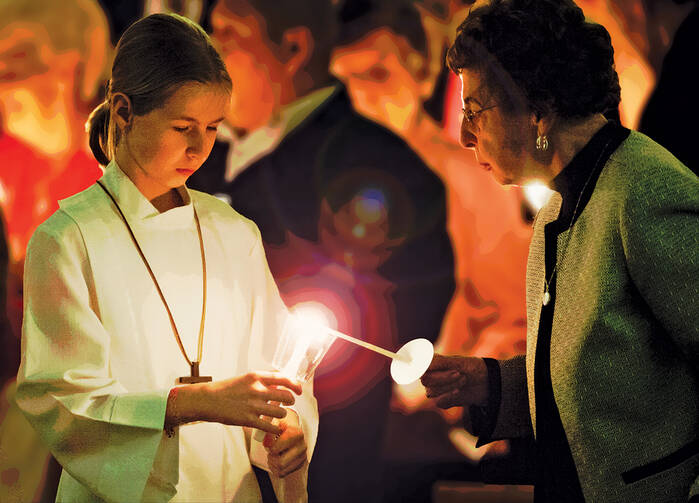 It is a Sunday morning in 1992, and I am 10 years old and visiting relatives in the Midwest. We head to church, pile into a pew, sit, stand and then sing the entrance hymn at Mass. I happen to look up from my missalette just as two girls who are about my age walk up the aisle; they are wearing robes and their light brown hair is pulled back into ponytails. My eyes widen and I look at my mother. She gives me a look that says, “I know. We’ll discuss later.” But throughout Mass the questions swim through my head: Why are there altar girls at this parish? Will we ever get altar girls at our home parish in Massachusetts? Can I ever be one of them?

For years, the answer to that last question had been a resounding no. There were no female altar servers in my parish, a fact that, in my mind, always seemed arbitrary and unfair, especially since my younger—younger!—brother already was able to become an acolyte. I longed to be more involved in the Mass, but the chances of my being able to join him on the altar always seemed slim. These girls gave me hope.

And so, two years later, when female altar servers were allowed, I signed up immediately, despite the fact that I was now in seventh grade and would have to spend my rookie year being trained alongside second-graders. For years my place at Mass reached only to the red carpeted steps of the altar. Now I would get to see the sacraments up close; I would get to serve my church and live my faith in a whole new way.

There were no female altar servers in my parish, a fact that, in my mind, always seemed arbitrary and unfair, especially since my younger—younger!—brother already was able to become an acolyte.

After our training sessions, I was asked to serve with two of my male classmates at the opening Mass for our school year in October. It was this fortunate timing, far more than any merit, that meant I became the first female altar server to serve a Mass at our parish.

The change was big news in our diocese. A reporter from our city paper called me before the Mass to get a quote for her story about new female servers. I paced across the floor of my parents’ bedroom as I talked into our cordless phone. This was my chance, I thought, to let my city know how meaningful it was to me to become an altar server.

And then, the next morning, there was my quote: “I had always wanted to do it—to serve at the altar,” I told the reporter. “I think it’s a good idea. I think I would feel pretty important. It will be neat to go up there and serve God.”

I read these words with some dismay. “Neat”? That was all I had come up with? I was not exactly the 12-year-old theologian I had imagined myself to be.

Now, 20 years later, I have had a chance to compose my thoughts. And in light of recent criticisms of the role of female altar servers, I would like to take the opportunity to add a bit of nuance to my original sentiments. I served as an altar server for six years, and the role helped to deepen my understanding of what the church is and can be, as well as my responsibility for helping it to become better. Here is some of what I learned.

The church is accessible. In order to serve at the church, I did not have to be anyone other than myself. When I became an altar server, I felt more comfortable climbing the steps to the altar, not because it lost its mystery, but because being there helped to deepen my experience of the Paschal Mystery. The space became at once more familiar and more sacred. I felt at home in my church in the best way possible.

The objects and symbols that accompany the sacraments became real to me as an altar server.

The church is tangible. The church is not simply an idea; it exists through individuals and through sacraments and sacramentals. The objects and symbols that accompany the sacraments became real to me as an altar server. I learned to swing a thurible; I learned the difference between a purificator and a corporal, and a chalice and a ciborium. I learned that these words and objects were part of a faith that has a vast and fascinating history, vocabulary and tradition—and that I was part of that history.

In all things, humility. As predicted, I did at times feel “important” while serving on the altar. But most days I simply felt grateful to be part of something more important than myself. I was humbled every time I held the book aloft to be read, carried the unconsecrated hosts to the altar so they could be transformed, poured out the water that washed the priest’s hands, rang the bells at the consecration. I grew in my faith as I learned about and participated in the many small, sacred actions that surrounded and celebrated this banquet.

Priests are people, too. I learned that priests forget where they put the keys to the rectory or where they left the Sacramentary. They don’t always understand how microphones work or which light switches turn on the lights by the altar. They sometimes can be rushed or late or grumpy. They also can be hilarious, kind, encouraging, enthusiastic and thoughtful. In short, they are just like everyone else. Knowing this also meant that, later, when I learned about the horrible crimes of sexual abuse by members of the clergy, I could mourn the failures of our church and work to correct them knowing that many good priests I had met along the way were doing the same.

I did at times feel “important” while serving on the altar. But most days I simply felt grateful to be part of something more important than myself.

The church is communal. One of the most coveted gigs as an acolyte was to serve at a wedding. This was in large part because each server typically got $20 from the happy couple. But I also found joy in the fact that I got to hold the wedding rings while they were blessed, to see the dresses up close and, most important, to contribute in a small way to the celebration of two people making a commitment to a lifetime of love. I felt honored to be a part of a faith community that supported such a commitment. This sense of community also was reinforced by the chance to look at the faces of the congregation from the altar. I was especially moved every year at the Easter Vigil, when each face was lit by a candle, from the front pew to the choir loft—and to see in each one the body of Christ.

We are accountable to one another. The elderly ladies commended me or corrected me on my serving skills after Mass. My parents beamed each time I served with my two siblings on the altar. In short, I learned that our actions as servers affected how others experienced the Mass. And so I strove for flawless execution of the book-holding or cross-carrying. But I also made mistakes. One Holy Thursday I spilled the entirety of the foot-washing water across the altar. The sacristan pitched in to help clean up, and her smile let me know that I was not the only person ever to make a mistake at Mass. On her knees beside me, she saw my mistake as an opportunity to demonstrate the spirit of service we prayed about that day, to pitch in and to teach me a lesson: Do not place large bowls of water too close to the edge of the altar steps. And God’s grace is not easily thwarted by our own imperfections.

Involving young people—boys and girls—in the Mass can help them to understand more deeply the honor of serving at the Lord’s table, and the importance of serving one another, from wherever we stand.

You don’t always get to choose the people with whom you serve. I served beside a boy who ate the wax off candles; another who feared ringing the bells; and a guy who always seemed one second away from lighting a cigarette with the hot coals meant for the incense. There were occasional arguments over who got to carry the cross (the tallest server often won) and who would be forced to carry the boat. And yet we almost always found something to laugh about in the sacristy. We learned to get along, to be O.K. with not getting our way.

Our faith must be lived publicly. Sometimes it must be lived in front of a crowd of people, some of whom think that what you’re doing is strange and wildly uncool. Occasionally, I felt a bit idiotic as I walked up the aisle in my blousy white robe with a red yarn rope around my waist—attire that screamed I am a religious teenager!—while trying to avoid catching the eyes of my classmates, whom I occasionally saw at Mass. But on most days, the privilege of participating in the Mass outweighed the fashion faux pas it required. And more often than not, I found my classmates more interested in learning than judging, as they wondered about the smell of the incense or the weight of the chalice.

Altar girls are a good idea. I’m sticking with this sentiment. Young women should have the chance to serve at the altar today, not just because they might feel “pretty important,” as my 12-year-old self predicted, but because they are important to the church. Young people are not simply the future of the church. They are the church right now. We adults are not always good at reminding them of that fact. Involving young people—boys and girls—in the Mass can help them to understand more deeply the honor of serving at the Lord’s table, and the importance of serving one another, from wherever we stand.