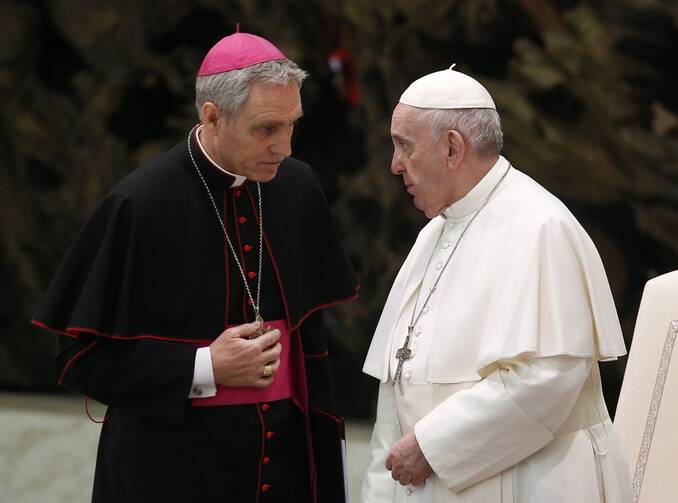 Munich (KNA) – Archbishop Georg Gänswein, the German private secretary of Pope Emeritus Benedict XVI, has spoken of his shock at having been placed on a leave of absence from his work for Pope Francis in early 2020.

Gänswein had been Prefect of the Papal Household until Francis unexpectedly told him at the end of January that he should devote all his time and energy to Benedict and that his duties as prefect were being redistributed. The decision had “pained” him, Gänswein told the German magazine Bunte.

Podcast: How Pope Francis is rethinking the role of his personal secretary
Inside the Vatican

He said he had naturally accepted the decision “in obedience” even though it had felt like a “punishment” to him. He knows now, however, that this was not the case.

Gänswein, 64, also said he suffered from kidney disease in September. He had been tired and fatigued for weeks and had catastrophic blood values. After two weeks in hospital, however, the doctors were able to rule out a tumour.

He said he has felt well again since December. After his hospital stay, he also had a “clarifying, very strengthening and encouraging meeting with Pope Francis.”

Gänswein said Benedict XVI remained very alert mentally. “Physically, however, he has become quite weak,” he said. “At 93, he is at a blessed age. Despite all their personal differences, he and his successor share a friendly, even cordial togetherness.”