What got Sister Simone Campbell through 2020 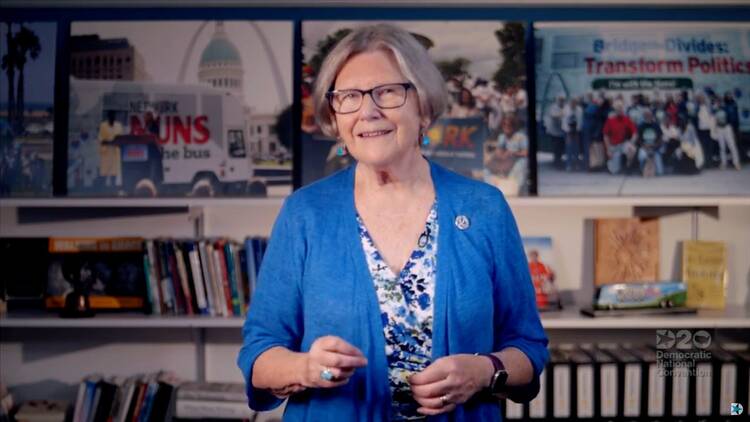 Editors’ Note: What do Bishop Robert E. Barron, two well-known Jesuit priests and two leading religious sisters in the United States have in common this pandemic year? All five confessed to binge-watching “The Crown.” Although, in a series of interviews, by phone and email, America has learned that the similarities among these prominent members of the U.S. Catholic Church are not limited to watching British period dramas on Netflix. If nothing else, all five are agreed that 2020 has been quite the year for spiritual revelation and renewal.

Sister Simone Campbell, S.S.S., a vowed religious sister, organizer of the “Nuns on the Bus” tour and executive director of NETWORK, a national lobby for social justice founded 49 years ago in Washington, D.C., confesses that there are few books she ever reads more than once. But, she told America, a couple this year bucked that trend.

The moonrise last night [Dec. 29, 2020], I think, is my image, because of the phases of the moon. My apartment looks due east, so I can see it rise and its various shapes and sizes. Last night it was almost full and I realized how hope has been like the moon in that it’s come and gone. And that the fullness of the moon is like, “Oh yes, we have a vaccine. We’re almost there. We can do it.” And then it starts waning again.

The fullness of the moon is like, “Oh yes, we have a vaccine. We’re almost there. We can do it.” And then it starts waning again.

Survival. And Zoom—technology. The fact that while we have trouble we can still stay connected. I can’t even imagine what this would be. Even 20 years ago we wouldn’t have had this level [of technology]. My community. I haven’t been able to be with them, because I live alone here in D.C., and my U.S. sisters are West Coast. We haven’t been able to be together all this time, but we can all get together—in the U.S., Mexico, Taiwan and the Philippines—on Zoom. It’s fabulous that we can see each other in this way. I’m grateful for the technology that makes it bearable.

Traveling. I gather stories of people, and they impact my life, my prayer, my policy work—they impact everything. We did a virtual “Nuns on the Bus” trip over a month, Sept. 21 to Oct. 23. We did 65 events. And it was all sitting in this same place.

What I realized later was that encounters with people happen not in the meetings but on the sides, on the physical sides of meetings. While we did a great bus trip virtually and more people could participate, there was a lot of good news. The hard news was, I didn’t get those informal conversations. And I missed it. My spiritual life was less for it. I was less nourished in the process, which I hadn’t fully realized: how important travel was for those side conversations.

I didn’t get those informal conversations. And I missed it. My spiritual life was less for it.

For years, I have had a contemplative practice. It's like Zen but done with Christian content. I call it Christian Zen. Every morning, I do meditation for a half-hour and then some reading. That gets me started. So it was the same as before Covid-19 but it had a different sense of urgency: Of trying to listen deeply to where we were being called and how to respond.

What new hobby did you take up during the most intense months of lockdown? Was there an old pastime you revived?

My life is politics. Early on, I was doing some knitting. I hadn’t knit for several years. And so I did a knitting project. More recently, I rediscovered crossword puzzles. A way to feel like I’m putting some pieces in place that stay there.

To treasure human contact—that physical touch. I’m a person who touches. If I’m talking to somebody I’ll reach out and put my hand on their arm, pat on the back or do that kind of stuff. This social distancing is very difficult. I look forward to the day that we can touch. I think it may be even more difficult for my sisters in California that are living in the assisted living place we have at the villa, because they are together and they are having to social-distance.

It had a different sense of urgency: Of trying to listen deeply to where we were being called and how to respond.

Was there an unexpected joy that you experienced during this time?

For the last eight years, I’ve been a 100,000-mile flyer on United, just from domestic flights. That’s a lot of fun. But being home meant I could go to the farmers market. A friend of mine lives in my neighborhood; she and I developed—early on in April—this ritual of going to the farmers market on Saturday morning to buy our vegetables and to go to the pastry tent where the guy sold almond croissants. I make coffee, bring thermoses of coffee and then we go sit by the river and watch the river, eat our croissants, sip our coffee and talk. And it’s become this dear, dear ritual. For me, it’s been the anchor of friendship and anticipation. You know, the story of The Little Prince: Look forward. Look forward to a friend coming, and to be socially distanced on our bench, and she has her little pot of coffee and I have mine.

The importance of deep listening, listening to the needs of the time. I really felt called, drawn to opposing Trump’s re-election for our survival. But I have to say it was so blessed. I learned that if we’re faithful to mission: Consider the lilies of the field. That’s all!

In all of it. You ought to know: I don’t consider it New Year’s Eve until the night of January 19. I’m looking forward to a new administration; to an administration that values our people. Joe Biden knows Catholic social teaching and lives out of it. It’s so exciting: the possibility of healing, I hope, for our nation.

If we’re faithful to mission: Consider the lilies of the field. That’s all!

One of the things that we did just before lockdown was we rolled out this rural roundtable report, where we had done 17 roundtables in 16 different states in rural communities to learn about rural community. What I realized was, in that process, how many rural communities feel so dismissed by the urban liberal coasts. When I’d [ask], “What do city folk get wrong about country living?” somebody would say, “City folk, think country people are dumb and uneducated, and it’s not true.” And I came back and talked to my city folk friends and they said, “Well, of course, they’re dumb. Why would they stay?” Not having a clue as to what it was about. So I hope there can be some healing of that, some mutual respect, some sense of shared commitment to each other.

There are two levels to that question. One is Caste, by Isabel Wilkerson. But, before I got Caste I re-read The Warmth of the Other Suns, by Isabel Wilkerson and that’s one of the best books I’ve ever read in my whole entire life. I’ve read it like three times and I don’t reread books. I [also] re-read my mystery books: Jacqueline Winspear’s Maisie Dobbs series. I devoured yet again. It was fun.

“The Crown” on Netflix—but I liked the Queen a lot better in the first two series than in the third and fourth.

I was sort of late to the party on this one, but The New York Times’s “The 1619 Project” was so critically important for our work. At NETWORK, we work so hard to dismantle structural racism, and seeing the roots of it in the 1619 project was really informative and challenging. At NETWORK, we’ve got this thing about the racial, wealth and income gap, the structural causes of it and trying to dismantle structural racism, and that really was an anchor piece for us, and I found it really helpful.