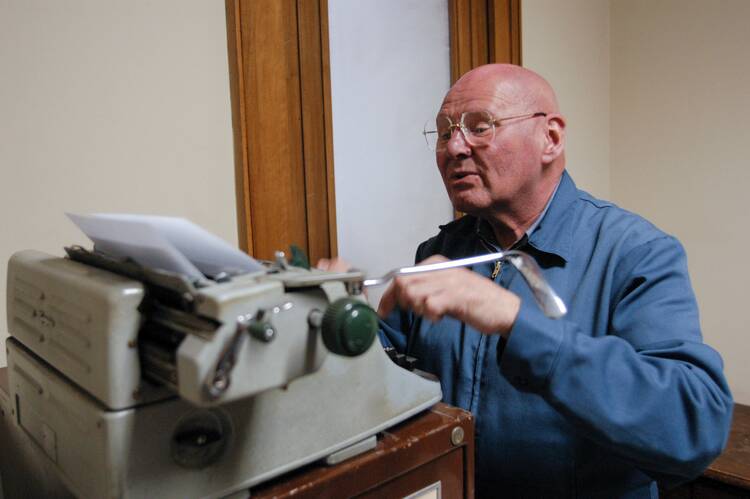 Famous for his homework sheets created on a manual typewriter, Father Reginald Foster is seen working in his Vatican office in this January 2007 file photo. The famed teacher of Latin died Dec. 25, 2020, in Milwaukee, Wis. (CNS photo/Chris Warde-Jones)

From 1982 to 1987, I studied at the Pontifical Gregorian University in Rome, doing first a licentiate degree and then a doctorate. My first semester was daunting. I had six courses, all taught in Italian, all lengthy lectures, each with anywhere from 50 to 200 students in the class, with nary a hand raised or a question asked. Only once in a rare moment did any professor ever invoke a concrete example of whatever he (yes, all were “he”) was teaching.

Except when I attended my Latin class, twice a week, for my first two years. It was taught by Reginald Foster, O.C.D., better known to all as Reggie.

That is where I felt at home.

His classroom was the farthest from the university’s entrance, in what seemed like the university’s rafters; but entering it was like walking into “Cheers.” There was life, noise, chatter, familiarity; and if everybody didn’t know my name, well, at least Reggie did. Though we might have been anywhere between 80 to 160 students in any given class, he knew literally everyone’s name, background and interests within two weeks of the beginning of each semester.

Life at the Greg was predictable. Whatever a faculty member wore to his first day of class, he wore to all others. No Greg prof ever changed his (clerical) style. The same for Reggie. Except every day, everywhere, Reggie wore the same blue shirt and blue pants with a blue worker-style jacket. While many insist he got the outfit from J. C. Penney, I always asserted that they were from Sears.

Please remember that in the fall of 1982, Pope John Paul II launched a campaign that all clergy in Rome had to wear the Roman collar at all times, with an exception only for particular sporting moments of swimming and soccer. And yet there, in front of our Latin class in 1982, was Father Reggie looking like he was ready to fix the leaky faucet.

Reggie Foster was an exceptional coach for each of us, and he expressed more emotional and intellectual energy and accompaniment than anyone I ever met.

In Latin every verb can be written in one of four moods. I found that Reggie had three of his own. There was the predominant, agitated mood that was concluded by a crescendo-like bellowing mood, but both were preceded by a fairly casual, easy-going one—that was a seductive prequel for the inevitable agitation and bellowing mood cycle.

Reggie was agitated because he was intensely interested in his subject, Latin; but he was also interested in us. He so wanted us to understand Latin because it was good for us. His agitation was not from frustration; it was simply evidence of how he lived. He was an exceptional coach for each of us, and he expressed more emotional and intellectual energy and accompaniment than anyone I ever met.

He gave us incredible two- to three-hour homework assignments every day that were typewritten on a single sheet of paper (no computers in 1982) , where we had to translate the text before us from Latin into English or English into Latin (!). Homework was like a Sudoku game: You had to understand the underlying connections of case, gender, tense, mood and voice in whatever order. Each word was a clue and together they made sense, but inasmuch as the dative looked often enough like the ablative, you could confuse what you were giving with whom you were getting it from.

At the beginning of class you would get your homework assignments back, always marked up, again by the grader in the agitated mood. But right after handing them back, he would call on someone. The problem was once he called on you, he never gave up on you. You knew what you didn’t understand, yet you were going to have to get right before the class was up. You would never be humiliated, but you would be exhausted. There were always four or five students who went through the mill in any given class.

He loved St. Augustine. I think he loved Augustine more than any other writer. He emphasized especially Augustine’s use of prepositions. That is where all his (both Augustine’s and Reggie’s) theology resided. The prepositions were descriptions of how agency worked and through them and their multitudinous meanings, the will of God radiated in its ever-increasing pathways to the human race. We learned why they each so appreciated the Word and how it was said and written, and how it was so intentionally, lovingly crafted.

I remember asking Reggie after class one day, while we were each returning to our communities, if he would like to come to my community at the Bellarmino, a residence for about 100 young Jesuits studying in Rome, for pranzo, the main noontime meal. “I hope you don’t take offense,” he said, “but I don’t really like that.” I understood.

Reggie was most alive when he was teaching, not in front of an anonymous audience, but before a very specific, highly variegated one. We were there for all very different reasons (I to do my dissertation on Thomas’s Summa Theologiae); but in those two classes each week, by his kindness and generosity, we learned about God, about grace and about redemption, by a master who looked like the plumber who was his father.