We deplore King Herod for his historic cruelty. But we are hardly any better.

We deplore King Herod for his historic cruelty. But we are hardly any better. 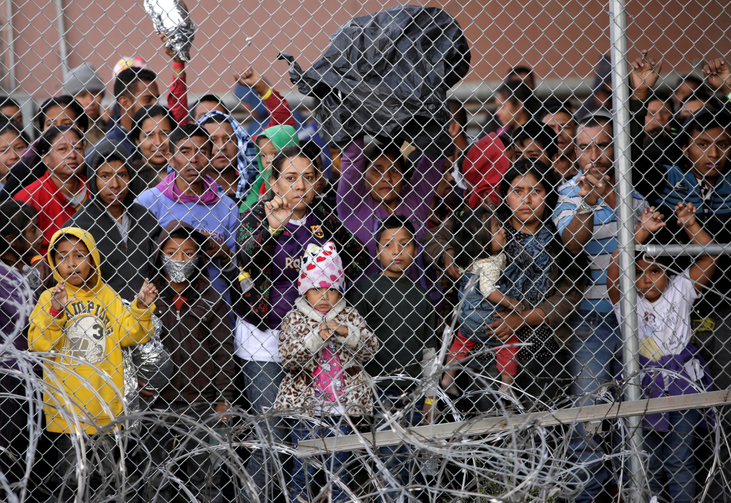 Central American migrants are seen inside an enclosure in El Paso, Texas, March 27, 2019.

The plight of holy innocents caught in political crossfires is as old as time. The faces change, the circumstances change and the perpetrators in power are different—but the brutal fight persists. Children pay a steep price that they do not owe. A seemingly old tale is happening now.

My father was a go-getter, a self-made success in the world of finance, but sometimes he forgot he was a dad. At least, that is what it felt like to my 10-year-old self waiting to be picked up from my afterschool ballet class. This happened often enough that, when it got dark and there was still no sign of my ride, the old ladies who ran the parish rectory would call me into the kitchen, hand me a few dried apricots and let me use their phone to call my mother. My mother would then call my father and yell at him to leave work and come get me.

That feeling of being left alone in the street, waiting for my dad, flooded me as I read Separated: Inside an American Tragedy, a blistering report on the Trump administration’s family-separation policies by Jacob Soboroff, an NBC News and MSNBC correspondent,. Without our knowing, children were stolen from their parents at the southern border of the United States.

The plight of holy innocents caught in political crossfires is as old as time. The faces change, the circumstances change and the perpetrators in power are different—but the brutal fight persists.

Worse, this policy of family separation was done in our name.

Upon asking for asylum, parents and children were sent to separate holding cells—never told that they would not see each other again. Parents did not know that they would be deported and that their children relocated within the United States. Unable to contact each other, parent and child were sometimes transported 1,000 miles or more away from each other. Children were held in deplorable conditions, in enclosures that observers were not supposed to call cages. “This place is called a shelter,”writes Soboroff, repeating the first words he said on-air after touring Casa Padre, a South Texas shelter for children separated from their parents, “but effectively these kids are incarcerated.”

Floundering in my long-ago feeling of being forgotten, I tried to imagine what it must have been like for the children and parents—victims of political warring—many of whom are not able to speak a word of English to cry for help. I tried to imagine what it would be like if my father had never come for me and I was sent to live with strangers. I tried to imagine all this happening to me when I was 5. Or 3. Or younger. In June 2019, The New York Times reported that Constantin Mutu was 4 months old when he was separated from his family and placed in foster care, an ordeal that endured for five months.

Children were held in deplorable conditions, in enclosures that observers were not supposed to call cages.

On the other side of this awfulness are the parents. You may have experienced temporarily losing track of your child at a playground or in a supermarket or at the zoo. One of my kids once thought it would be funny to hide from me outside the house while I was bringing in groceries. I will never forget that instant terror of not knowing where my child was and that something terrible could be happening. The paralyzing fear that you have not protected your little one is a swift and white-hot stab to the heart. But the pain is extinguished when your child is found safe, and you are overcome with the relief and gratitude that tragedy may have been spared. Now imagine living with that panic for a couple of years: a harsh and heartbreaking exercise in imagination.

After the Trump administration intentionally removed children from their parents in 2018 to deter others from seeking asylum at the southern border, it turned out that no authority had tracked the parents of “tender-age” children left in the state’s care. Identifying documents were lost or destroyed or withheld and many parents had already been deported. Babies and children were released to other caregivers. Even after this abhorrent policy was discontinued due to public outcry and a subsequent federal court order, two years later, there remain over 600 children whose parents have yet to be located by U.S. government officials. These children are the holy innocents of our day.

On this traditional feast day of the Holy Innocents, we mourn the little boys of Bethlehem executed in place of the baby Jesus by a jealous king. I can almost hear the sound of weeping throughout the land by parents who could not be consoled. The mourning of a parent for a lost child knows no limit, no end. There is no closure.

After the Trump administration intentionally removed children from their parents in 2018, it turned out that no authority had tracked the parents of “tender-age” children left in the state’s care.

We, parents, cannot bear the thought, today, of those grieving parents of old. We, mothers, are especially wracked by this grief, imagining our breasts leaking milk without a baby to nurse. But those anguished parents are still with us today, crying out against the violence done to their families by our government.

The church, amid Christmas joy, does not allow us to forget the sacrifice that often accompanies faith.

We commemorate the first Christian martyr, St. Stephen, the day after Christmas, and the slaughtered Holy Innocents of Bethlehem two days after that. We retell the story of the Holy Family’s fraught flight to Egypt, fearing for the life of their newborn son. It’s as though the Church is reminding us that, yes, Jesus is dwelling among us; but there is still much work to be done against injustice, violence and hatred. As people of faith, we are to be about that work. Jesus expects to dwell in us.

Even after this abhorrent policy was discontinued, two years later, there remain over 600 children whose parents have yet to be located by U.S. government officials.

On paper, the Trump administration has ended the family separation policy, but we have yet to end the callous and shameful treatment of suffering strangers at our door.

“The U.S. government’s forcible separation of asylum-seeking families constitutes cruel, inhumane, or degrading treatment,” said a 2020 report by Physicians for Human Rights that evaluated Mr. Trump’s ill-conceived and repugnant policy. Reviewing the definition for torture as established in the United Nations Convention Against Torture, the report concluded that “the U.S. government’s treatment of asylum seekers through its policy of family separation constitutes cruel, inhuman, and degrading treatment and constitutes torture in all of the cases documented.”

All this, in our name. And on our watch.

The Trump administration has ended the family separation policy, but we have yet to end the callous and shameful treatment of suffering strangers at our door.

The Holy Innocents of today continue to arrive and ask for our help. They are at our border and in our jails. The way we welcome them or neglect them tells the story of who we are as a nation and lately it is not looking very Christian.

We deplore the despot Herod for his historic cruelty. The blood of the Holy Innocents forever stains him. But we are hardly better.

As a result of our misbegotten family separation policy, at least seven children have died while in the custody of our Border Patrol. Thousands more have been adversely affected and will continue to be traumatized. The damage we have inflicted on children by tearing and keeping them from the security of their parents’ arms, locking them up in cages and losing track of their parents, will forever stain us, whether or not they are ever reunited.

Show Comments ()
Join the conversation: Login or create an account
Before you can comment, you need to update your profile to include your first and last name, as required in our comments policy. Then reload this page and you'll be set up for commenting. Update your profile
More: Immigration / Donald Trump / US Church