What I saw in Bethlehem this Christmas: Shuttered shops, an open church door—and hope. 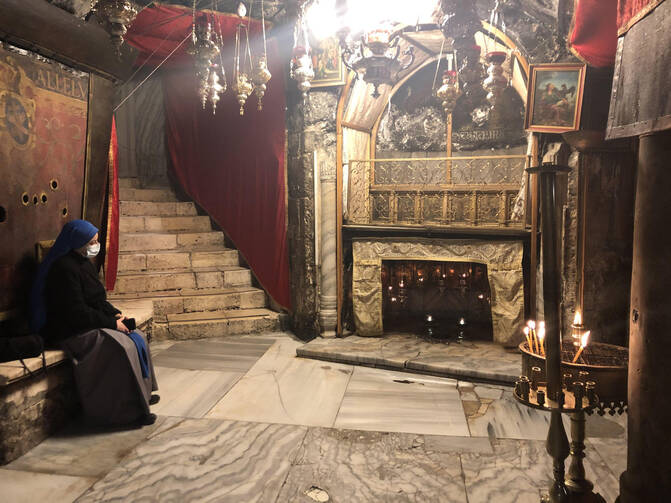 The Church of the Nativity in Bethlehem. (Credit: Stephanie Saldaña)

I’ll remember this Advent as the year the planets aligned. The year the city of Jesus’ birth shut down. Oranges in season. Arriving at the Church of the Nativity to find the door open.

This year I walked to Bethlehem.

That is not as arduous as it sounds. I live in Jerusalem, just beside the checkpoint into Bethlehem. But I had not crossed into the city for months, since the earliest days of the pandemic. I set out the day of the solstice, the shortest day of the year, with no idea what I would find: The city had been subject to lockdowns and curfews in an attempt to keep Covid-19 from spreading. As I walked towards the city center, I barely recognized the city I know so well. Hotel after hotel had shut their doors. Shops were shuttered. Few of the Christmas lights and wreaths that usually adorn the city in December were visible. Finally, I had to stop and ask for directions. I couldn’t even recognize where I was.

This year, I have the chance to make Advent the peaceful season I’ve always wanted it to be.
Paul Lynch

Christmas made my family’s favorite traditions. This one is breaking them.
Sebastian Gomes

“Straight ahead. Just keep going,” a shopkeeper confirmed. Normally at Christmastime, thousands of tourists would crowd the center. This year, with nearly all foreigners banned from entering the country, there was no one.

I climbed up to Manger Square, the heart of the city just in front of the Basilica of the Nativity, usually alive with music and crowds the week before Christmas. A few scattered locals—Muslim women in headscarves—took masked selfies in front of the city’s famous Christmas tree. Workers dismantled the stalls of a Christmas market. The only visible crowd was the statues in a life-sized creche: Mary, Joseph, baby Jesus, the three wise men, an angel and a shepherd huddled together.

I glanced in the direction of the Basilica, then looked again. It had to be a trick of light. The entrance—a door so small that you have to bow down to enter it—appeared to be open.

A man saw me squinting. “Yes, it’s open,” he confirmed.

A wave of emotion swept over me. I rarely visit the Church of the Nativity at Christmastime, as the lines inside can stretch for hours. But during the rest of the year, I stop in during each visit to Bethlehem to pray in the place where Jesus was born. When I was pregnant with my own children, who were born in a hospital nearby, I often prayed in the cave beneath the church. I walked with each child, hand in hand, in the years after, to teach them to touch the star on the ground. It might be one of the oldest churches in the world—the first Basilica dates to 339 A.D.—but for me it felt like home. Like all of the holy places, the doors had been shut for much of the pandemic. Now I found it unexpectedly open in a moment when so much else in the world was closed.

For months, I had been longing to understand more of what Christmas really means, here and now.

I crossed the square, past the sign reading “Masks required. Do not enter without a face covering”and bowed to pass through the front door. Inside, I found the church almost entirely empty.

I felt myself drawn forward. For months, I had been longing to understand more of what Christmas really means, here and now. I had noticed how fragile the story is, how much it speaks to our own fragile times. No room in the inn on one side. The massacre of the innocents on the other. In the middle of these two stories, God enters in.

In the church, a young woman lit candles, whispering. A man prayed before an icon. I placed my own candles, naming those I love, and then descended the few steps into the cave where tradition says the birth of Jesus took place. This going down, full of emotion. “But he emptied himself, in the form of a servant.” A reminder of the humility of Christ himself.

And there I was. In an empty cave, with the 14-pointed star on the ground, where Jesus was born. In this year, of all years. For the first time I could finally see it. The star at the center, where the child came into the world. The space on the sides, where Joseph and Mary knelt. The wise men and shepherds. The place where hope broke in.

In the emptiness, I remembered those who were not there with me. The pilgrims unable to travel. The sick, unable to leave their beds. Those who had died. I carried them with me into the cave.

My family, far away. Friends. Loved ones. My memories of children, dressed up as shepherds and angels, and voices singing “Oh Little Town of Bethlehem.”

A nun, quiet and masked, entered and prayed near the star.

The knowledge of a world, broken. A year like no other.

A nun, quiet and masked, entered and prayed near the star. She took her place in this living creche. Soon, an elderly, Palestinian woman began lighting candles. She slowly descended, step by step, to the manger, deeper into the cave. “I only descend once a year, on the feast,” she said. She whispered a prayer, then painfully climbed the stairs back out.

I found myself all alone, sitting against the back wall. A man walked in—only to blow out candles and carry them out. A few minutes later, another, holding a broom and dustpan to sweep the floor beneath the manger. Each taking their place in the creche, preparing for the child—here and now.

All of us participate in a story that began with wise men and shepherds, that continues with us, no matter where we are. All of us bring ourselves to the manger. We carry those we love. We bring our worries. Our griefs. We bring our hearts, and we place them at the star, like so many before us.

When I left the church, I was met in the courtyard with the vision of orange trees in full fruit. In the market, shops opening—a few days of respite before the city was set to shut down again. Everything took on a color. Strawberries. Bright green mallow leaves.

In the darkness of the world, the color takes on color, the light takes on light.

That evening, I spoke to Peter Du Brul, S.J., a friend and Jesuit priest who has lived in Bethlehem since 1974. He described a year like no other, including the economic crisis, the occupation, the ongoing threat of war and the pandemic. “I went to see a girl the other day,” he told me. “Her father had Covid. He nearly died, and he spent almost a month in intensive care. She was 22, and she looked about 42. She’s aged.”

Darkness on one side. Darkness on the other. And into this, God enters in.

I asked him what the manger can show us in a year like this. “It’s hope against hope,” he insisted, his voice full of emotion. “Just trying to see the real is getting to the manger. What is the real? What is the truth, without illusions?”

Darkness on one side. Darkness on the other. And into this, God enters in.

Later, Father Peter called me. He wanted to tell me where we can find that hope. “The light comes from our breathings, from our dreams, and our bodies and our stars,” he told me. “The magi were looking to the stars. Joseph was looking to his dreams. Mary was very aware of her own body. Hearing, feeling, seeing, sleeping. God is working with us. God speaks to us when we are sleeping and when we are awake.”

The manger is there for all of us. We just need to be awake to what draws us there.

I will remember that day in Bethlehem as the shortest of the year, with the longest night. The day Jupiter and Saturn aligned—a light in darkness. The year the pandemic closed a city. And, at least for a morning, a door was left opened.

Dear readers, I lit a candle in the church for you.

More stories from America:
-A Christmas prayer for (nearly) everyone

-Christmas made my family’s favorite traditions. This one is breaking them.
-A brief history of ‘O Holy Night,’ the rousing Christmas hymn that garnered mixed reviews 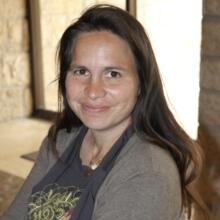 Stephanie Saldaña is the author, most recently, of A Country Between and the founder of the website Mosaic Stories. She lives in Jerusalem.